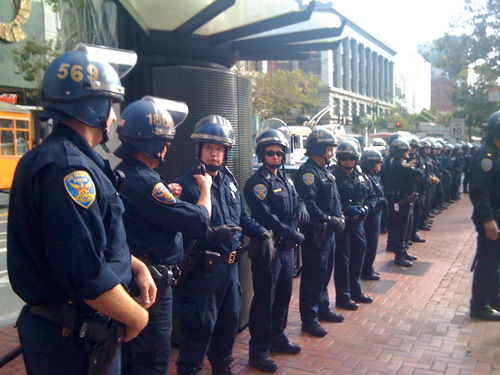 For weeks now, protesters have descended on Bay Area Rapid Transit (BART) stations to denounce the fatal July 3 shooting of homeless passenger Charles Hill by a BART Police officer, and to call for the agency’s long-controversial police force to be disbanded. Commuters have had to contend with service disruptions and delays, and costs to the transit agency have exceeded $300,000. Yet it isn’t just bullhorn-wielding protesters who’ve been thrust into the spotlight — BART’s police force is also facing scrutiny for its conduct under pressure.

BART drew the ire of numerous media outlets after a Sept. 8 protest when transit cops detained members of the press along with protesters on suspected violation of California Penal Code Section 369i, which prohibits interfering with the operations of a railroad. Most journalists were eventually released, but the protest resulted in 24 arrests.

Although BART police later contended that they issued dispersal orders prior to closing in, many who were encircled and detained (including me) insisted they’d heard no such announcement. BART police also instructed San Francisco Police Department (SFPD) officers who were on hand to assist to seize reporters’ SFPD-issued press passes — a move that SFPD spokesperson Troy Dangerfield later told the Guardian was an error that went against normal SFPD protocol.

In a Sept. 10 editorial, the San Francisco Chronicle blasted BART police for placing Chronicle reporter Vivian Ho in handcuffs despite being informed that she was there as a journalist. Ho’s experience was mild compared with that of Indybay reporter David Morse (aka Dave Id), who told the Guardian he was singled out for arrest by BART Deputy Police Chief Daniel Hartwig and isolated from the scene — even though Hartwig is familiar with Morse and knows he’s been covering protests and BART board meetings for the free online publication. Asked why Morse was arrested when other journalists detained for the same violation were released, BART spokesperson Jim Allison told us, “The courts will answer that, won’t they?”

No Justice, No BART — a group that was instrumental in organizing the Sept. 8 protest — telegraphed to media and police at the outset that they intended to test BART’s assertions that people’s constitutionally guaranteed rights to free speech would be upheld as long as they remained outside the paid areas of the station, in what was dubbed a “free speech zone.” (Rebecca Bowe)

Scott Wiener tried to do something eminently reasonable, and ask the naked guys in the Castro to put down a towel before they sit on public benches. Although the Department of Public Health hasn’t made any statements about the issue (and people put their naked butts on public toilet seats without creating major social problems), it’s pretty much an ick factor thing — and using a towel is an unwritten (sometimes written) rule at almost every nudist resort in the country.

Wiener’s move set off an anti-nudity campaign at the San Francisco Chronicle, starting with columnist C.W. Nevius suggesting that the nudies are all perverts: “If these guys were opening a trench coat and exposing themselves to bystanders in a supermarket parking lot we’d call them creeps.” A Chron editorial called for a new law banning nudity in the city (an excellent use of time for a police department that already says it can’t afford community policing). The national (right-wing) press is having a field day. The commenters on sfbg.com are arguing about whether the pantsless men are shedding scrotal hair, or whether they’re mostly shaved. For the record, we haven’t checked.

And for the record, in a couple of months it’s going to get way too cold and rainy for this sort of thing anyway. (Tim Redmond)

City Attorney Dennis Herrera has always been limited by his office’s neutral role in criticizing city policies and officials. But as a mayoral candidate, he seems to have really discovered his political voice, offering more full-throated criticisms of Mayor Ed Lee and his policies than any of the other top-tier candidates.

“I think it’s kind of liberating for him that he can talk policy instead of just about legal issues,” Herrera’s longtime spokesperson Matt Dorsey, who recently took a leave from his city job to work on the campaign full-time, told the Guardian.

Perhaps not surprisingly, Herrera’s shift began a little more than a month ago when Lee bowed to pressure from Willie Brown, Rose Pak, and other top power brokers to get into mayor’s race, prompting Herrera’s biting analysis that, “Ed Lee’s biggest problem isn’t that he’s a dishonest man — it’s that he’s not his own man. The fact is, if Ed Lee is elected mayor, powerful people will continue to insist on things. And I don’t think San Franciscans can be blamed for having serious doubts about whether Ed Lee would have the courage to say no.”

Herrera followed up last week by providing an example of something Lee and most other mayoral candidates don’t have the courage to say no to: the Central Subway project, with its runaway price tag and growing number of critics that say it’s a wasteful and inefficient boondoggle that will worsen Muni’s operating budget deficit.

“Fiascos aren’t born that way. They typically grow from the seeds of worthy idea, and their laudable promise is betrayed in subtle increments over time,” was how Herrera began a paper he released Sept. 8 called “It’s time to rethink the Central Subway,” in which he calls for a reevaluation of a project that he and the entire Board of Supervisors once supported.

He notes that the project’s costs have tripled and its design flaws have been criticized by the Civil Grand Jury and numerous transit experts. “Let’s look at this thing and see if it still makes sense,” Herrera told us, a stand that was greeted as blasphemy from the project’s supporters in Chinatown, who called at least two press conferences to decry that they called a “cheap political stunt.”

While the stand does indeed help distinguish Herrera from a crowded mayoral field, he insists that it was the grand jury report and other critiques that prompted him to raise the issue. “Good policy is good politics, so let’s have a debate on it and let the validity of the project stand or fall on its merits,” he said.

Herrera and fellow candidate John Avalos were also the ones who called out Lee on Sept. 2 for praising Pacific Gas & Electric Co. as “a great company that get it” for contributing $250,000 to a literacy program, despite PG&E’s deadly negligence in the San Bruno pipeline explosion and its spending of tens of millions of dollars to sabotage public power efforts and otherwise corrupt the political process.

“It shows insensitivity to victims’ families, and poor judgment for allowing his office to be used as a corporate PR tool. No less troubling, it ignores the serious work my office and others have done to protect San Franciscans from PG&E’s negligence,” Herrera said in a prepared statement.

Now, his rhetoric isn’t quite up to that of Green Party mayoral candidate Terry Baum, who last week called for PG&E executives to be jailed for their negligence, but it’s not bad for a lawyerly type. Herrera insists that he’s always wielded a big stick, expressed through filing public interest lawsuits rather than campaign missives, “but the motivation in how I do either is not really different.” (Steven T. Jones)

The mayor’s race just got a new player, someone who is guaranteed to liven things up. His name is Jack Davis — and he’s already gone on the attack.

Davis, the infamous bad boy of political consulting who is so feared that Gavin Newsom paid him handsomely just to stay out of the 2003 mayor’s race, has been keeping a low profile of late. But he’s come out of semi-retirement to work for Jeff Adachi, the public defender who is both running for mayor and promoting Prop. D, his pension-reform plan.

Davis and Adachi first bonded when Adachi ran against appointed incumbent Kim Burton in 2002. Now, Davis has begun firing away at Mayor Ed Lee, with a new mailer that calls the competing Lee pension plan a “backroom deal.” The piece features a shadowy figure (who looks nothing like Ed Lee) slipping through a closing door, a fancy ashtray full of cigars and an allegation that Lee gave the cops a sweet pension deal in exchange for the police union endorsement.

Meanwhile, Adachi sent Lee a letter on Sept. 8 challenging him to debate the merits of their rival pension measures — Lee spearheaded the creation of Prop. C, with input from labor unions and other stakeholders — sometime in the next month.

“I believe there is a vital need — if not an obligation — for us to ensure that the voters of San Francisco understand both the severity of our pension crisis as well as the significant differences between our two proposals,” Adachi wrote, later adding, “As the two principals behind the competing ballot measures, I hope that we can work together to increase awareness of this important issue and work toward a better future for our city.”

Lee’s campaign didn’t respond directly to Adachi, but Lee’s ever-caustic campaign spokesperson Tony Winnicker told the Guardian that the request was “the oldest political trick in book” and one they were rejecting, going on to say, “Voters deserve to hear from all the candidates on pension reform, not just two of them.”

Perhaps, but given the mind-numbing minutiae that differentiates the two measures, some kind of public airing of their differences might be good for all of us. Or I suppose we can just trust all those dueling mailers headed our way, right? (stj)

For more, visit our Politics blog at www.sfbg.com.