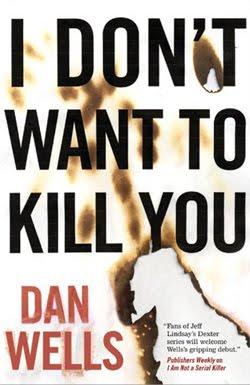 One of the reviews on the back of this book says that “regardless or your age or your genre preferences, you will find this story both profound and enthralling.” The usual blurb crap, but it did make me think that this could be another series like the Maximum Ride books –stuff my 12-year-old son and I could share.

He’s pretty advanced in the thriller world; he reads Stephen Hunter and Lee Child. And this one seemed right up his alley — a shy high school kid who has to fight off a demon made of black goo that takes over the bodies (and minds) of humans. John Wayne Cleaver (perfect name for a demon hunter) is the only one who can stop the evil creature from killing everyone in town.

But I Don’t Want To Kill You is just a tad too creepy for young teens, even kids raised on today’s violent video games. See, Cleaver’s mom is an undertaker, and John lives in the family funeral home and helps with the embalming — and while I appreciate the grisly details of mortuary science, particularly the use of vaseline to plug bullet holes so the preservative fluid can be pumped through the veins, it gets to be a bit much.

So I’ll wait a couple of years before I pass this along to Michael — but I’m happy to share it with my adult friends. It’s great — weird, nasty, sometimes sick, but brilliantly written with memorable prose, a great plot and lively characters.

Our protagonist is a diagnosed sociopath, someone pretty much incapable of feeling empathy for other human beings. He’s positively beastly to his poor mom. But he’s not as cold-hearted as he seems — he knows that he has to risk his own life to save everyone else in the town, and he goes about it in a methodical and logical way.

The only problem: This depraved and confused high school kid starts to maybe, sorta fall in love. With a girl who’s hot and popular and ought to want nothing to do with him. For a while, we suspect that she might be the demon, but she’s not — she just likes John, the way cute teenage girls sometimes like boys who are so odd that they’re attractive.

The thing is, her friends, the other teenage girls, start killing themselves, for no good reason, and it’s clear that the demon is somehow at work. Oh, she (John is convinced that the demon is female) also kills a priest and a teacher — and it’s not clear exactly how or why she’s choosing her targets. Except that John Wayne Cleaver is going to be one of them.

Slashed up body parts. Gross post-autopsy mortuary scenes. Eyes gouged out, tongues cut off, bodies stuck up on poles, gunshots, death by fire … and a first date and a first kiss and some honest puberty angst. You know, to go with all the blood and petroleum jelly and body fluids and black goo.

You gotta check this one out.