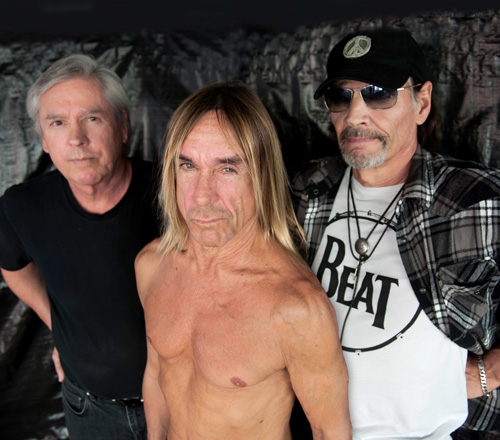 MUSIC Does the Godfather of Punk really need an introduction? It’s Iggy Pop. He’s been doing this — this meaning spitting out underground ethos in a signature growl and writhing shirtless — for nearly 50 years. With the untimely death of original Stooge guitarist Ron Asheton, Pop regrouped and tapped Raw Power-era player James Williamson to rejoin the band a couple of years back.

I spoke to Pop in Paris over the phone — his current world tour was supposed to land in San Francisco on Sept. 12 and 13. As we were going to press, however, we were informed that the ever-wild Pop broke his foot and his appearance here will be rescheduled, with new dates TBA Dec. 4 and 6 at the Warfield. We wish him a speedy recovery!

SFBG: What songs are you playing this tour?

Iggy Pop: All of Raw Power, some of Funhouse, some songs from the eponymous debut the Stooges, and some stuff that was too hot to handle, too raw for the times — stuff that came out on bootlegs in the ’70s like “Cock in My Pocket,” “Open Up and Bleed,” “Head on the Curve.”

SFBG: And James Williamson is on guitar?

Iggy Pop: Yeah, it’s James. The three principles in the group are James, myself and [drummer] Scott Asheton, — [Scott] had a medical emergency…after our appearance at the Hellfest. He’s now home — he’s benched for the rest of the year. I expect he’ll fully recover and be back next year. His replacement on drums is somebody that grew up listening to our records — Toby Dammit. And Mike Watt is with us, and Steve Mackay. Mike’s there being Mike, you know?

SFBG: I do. At this point in your career do feel pressure to maintain this ‘Wild Child’ image?

Iggy Pop: You mean you’ve noticed my style? [Laughs]. It’s interesting. I feel a desire to — [screams] “still do that, BABY!” — at certain times when it’s going to do me good. And I can’t think of a better time than when the Stooges are cranking, and there are a bunch of people who are sick of this shit-soup that white rock has become and want to see some action. I let some of those elements live and breath, and I always feel good about it.

I don’t think there’s so much an image I have to live up to because one of the beautiful things about being me and about being the Stooges is that we never, ever received any legitimate or uncontested exposure from either the official music industry, when it existed, or the official media. We’re more popular now than we ever were. I’m 64 and I’m just starting to hit a career peak. I consciously try to introduce as many new things as I can into what I do and try to keep moderating it. My hair’s not gray, I haven’t lost interest in life.

SFBG: So what are you looking forward to in the future? The future being later tonight, and six months down the line?

Iggy Pop: [Laughs] well, later tonight, my wife’s with me, and I’m going to open half a bottle of Bordeaux, watch the French news, and practice my French. I’ve made a small album of my own [Existence] that’s along the lines of [2009’s] Préliminaires so I’m working on seeing if I can bamboozle some record company into putting that out. But I’m also working on [Stooges] stuff with James. He’s a real prolific talent, and wasn’t playing music for something like 37 years — he’s got a lot of pent-up energy. It’s funny because he’s an eminently sane, responsible family man who has become a very successful tech executive in San Jose. But he has still reserved his unreasoning, adolescent, spiteful side for our group — so out it comes!

SFBG: How did you end up on American Idol?

Iggy Pop: Well, my agent was begging and threatening — and I’m the sort of person that likes to take a dare. I don’t know how many times I’ve slunk past the television set when that thing was on fuming, “this stinks, what a bunch of shit this is, look at these people — they might as well be parrots!” Yet, behind all that you’re always thinking, “I can do better than that.” I thought of all 102 reasons why I shouldn’t do it, but you’re being offered a chance to do one of your own songs…on the same stage, with the chance to do it your way. I did it for that. To give four minutes of my life and put that on the record in America.

SFBG: On that same note, what was the Rock and Roll Hall of Fame experience like for you, finally getting inducted in 2010?

Shortly after Ron and Scott and I started working together again I said, “are there any specific things you want to accomplish?” And both said, “well, I want to be in the Rock and Roll Hall of Fame. That would be the big thing.” So at that point I started doing things that would tend to let that happen. I did a couple of Grammy-related events. And then we did Madonna’s [induction]. I figured if the voters for this thing didn’t know who we were before, they’d know now. It’s a shame, Ron was really pissed when they didn’t induct us the next year — he hated doing the Madonna song but I didn’t mind. Hell, we could do “Happy Birthday” and it would sound good, too. It would sound like us.