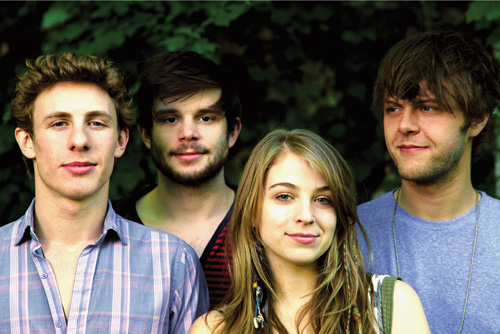 MUSIC What’s so funny about sweetness and light? Bright, explosive jolts of jubilance and snappy uplift? Everything and nothing, Givers might say. The Lafayette, La., band embraces an ecstatic fun-for-all aesthetic on its debut, In Light (Glassnote) — though sultry-voiced vocalist-percussionist Tiffany Lamson still feels a need to defend her group’s rollicking, bubbling bliss bombs.

“This is the era where we need to support each other as a human race,” she says from Lafayette as Givers readies itself to hit the road for a tour that lands in SF Sept. 7. “There’s not enough space to be a band that sings about depressing shit and stuff that’s negative toward others. That era is kind of over.”

Still, Lamson, 23, sounds the teeniest bit defensive. “We do get the whole happy coin — that we’re obsessively happy,” she continues, “which is fine. I’m not going to say we’re not. If you come in the van with us for a couple days, you’ll see we’re more like a family. We have our trials and tribulations in turn that help us grow, though we generally love life and try to be happy. Who doesn’t want to be happy?”

So there — hater nation can just go suck on Givers’ generous odes to joy. As Lamson and band co-founder, vocalist, and guitarist Taylor Guarisco yelp, “I choose life!” in In Light‘s final word, “Words,” a shimmering backdrop of elastic West African-inspired guitar, glassy synth textures, and punchy polyrhythms sing out behind them in affirmation.

“The stigma is that the only thing we provide is surface-level statement,” adds Lamson. “There’s deeper roots and introspection, too.”

That music flowed forth immediately, the first time in 2008 that Lamson and Guarisco, both studying music at the University of New Orleans, played together at a friendly, last-minute fill-in show in Lafayette. Drummer Kirby Campbell, trumpet player Josh LeBlanc, and keyboardists Will Henderson and Nick Stephan joined them, improvising two hours of music. “We were just friends who all played in different bands with each other,” recounts Lamson. “It was a magical thing. We were having a really naturally good time, and we were just moving around with these instruments, being free, playing any instrument we wanted to at the moment.”

That night’s music continued to resonate for Givers, providing the basis for the self-produced In Light when the combo sat down to assemble the album last January. “We spent a lot of time arranging the songs and working on them, so they could be the best they could be for the record,” Lamson says. Engineer Ben Allen (Animal Collective, Cee-Lo) and mix engineer Chris Coady (TV on the Radio, Beach House) helped the process along.

Those veterans might have helped to make In Light an album with surprising dimensions, with fresh angles on shiny, happy sounds, but the band would likely look to their upbringing in southwest Louisiana, steeped in the music of the Cajun-zydeco capital of the world, as having a greater impact. “We were born and raised in this environment, this very rhythm-oriented environment,” explains Lamson.

“It plays a huge part in the way that we play music and the way we live ourselves. Without putting cliches on it, there’s a huge sense of unity — it’s such a diverse area, and you have West African music and Haitian music, and those all soak into Cajun and zydeco culture. People live life a lot slower here — there isn’t the hustle and bustle, and people tend to slow down and appreciate things.” She chuckles. “Maybe it’s the heat.”