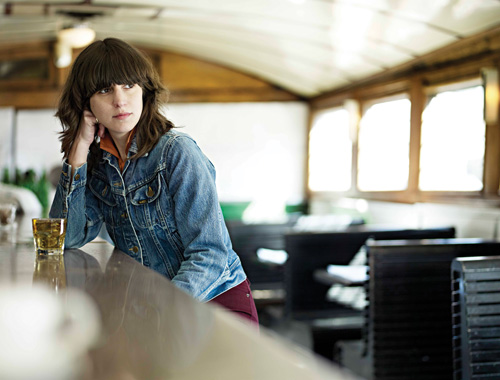 MUSIC I didn’t mean to bring the earthquake to Eleanor Friedberger’s Brooklyn — it just felt that way when I rang a few weeks ago, minutes after her ‘hood shivered and shook like it was attempting a weak imitation of, well, San Francisco. “Actually it sounded like someone was stomping on my roof,” she says wryly, phasing in and out over the line as if spirited away by unexplained forces.

A coincidence, too, that she closes her first, wonderful solo long-player, Last Summer (Merge), with a number titled “Early Earthquake,” a minimalist love song that evokes early solo Lou Reed and spins from those ground-bending emotions that hit far too soon, far too hard. “It was an early earthquake and my heart’s trembling just for you / And when the walls came crumbling down / You know I was waiting right here for you,” she sings with her charmingly verbose hipster-priest phrasing, in a feather-light voice.

“Early Earthquake” ends with a sliver of exotica culled from an optigan. “It’s almost like a toy for adults,” Friedberger says of the ’70s-era instrument. Her brother, Matthew, used one on a song for their band, the Fiery Furnaces, and, she adds, “I said if I ever found one I’d buy it.” That she did, from “an expensive music store in Brooklyn — not very cool,” she murmurs.

That brand of disarming, hyper-self-aware honesty — dotted with a dry, playful sense of irony — runs like a startling thread throughout Friedberger’s conversation, making me wanna be instant BFFs. I can see us now: telling the truth about birthdays (“Always bleak,” Friedberger declares of her Sept. 2 birthday, though she’ll be in the Bay Area that week, so bring her a gift), laughing that she’d make the perfect Patti Smith in the film version of Just Kids, scaring ourselves with the spooky effects in “Inn of the Seventh Ray,” pondering the puzzle of Google-ing dates in “Scenes from Bensonhurst,” and cruising through the borough with the rubbery-bass-bumping “Roosevelt Island” blaring. The latter is the closest thing to a genuine summer song on Last Summer; Friedberger agrees — it’s built to be pouring out of “a Buick, definitely an American car, if there are any of those left,” she says.

Last Summer is the solo record she’s always wanted to make — and when she had the time and summoned the confidence that comes with age and experience, she did, writing the songs last summer and recording them that fall, in Brooklyn. “I felt it was now or never. I always thought I’d regret if I didn’t do something myself,” Friedberger says. “There was no lightning bolt of inspiration—I don’t believe in that.

And in contrast to all those who refuse to ‘fess up to the autobiographical nature of their work, Friedberger offers, “All of it is drawn from my personal life — no imagination used. I’m trying to decide if it’s lazy or brave, I don’t know.”

In the same spirit of full disclosure, she opens the album with an infectious ditty called “My Mistakes,” climaxing with a gloriously cheesy tenor sax solo. “I was trying to copy a Van Morrison-sounding saxophone solo,” she freely admits, though it was a fight trying to get sax player Dylan Heaney to agree. “He has a jazz school background and wanted to do something new or original. I don’t believe in that, though — I’m all for copying.”

Yet Friedberger, whether solo or with the Fiery Furnaces, still manages to have one of the most original voices of her generation. Perhaps it stems from the creative support of a sib. “We have this musical language that I just don’t have with anybody else,” she says of Matthew. “But at the same time, we constantly feel like we need an excuse to do something together — because we’re not a normal band. There has to be an elaborate thought process that justifies it.”

“That’s getting tiring. So it’s liberating to make something that’s small and personal. For me, it’s more about expressing my tiny pathetic feelings.” Slight pause. “I’m kidding.”

With the Kills and Mini Mansions