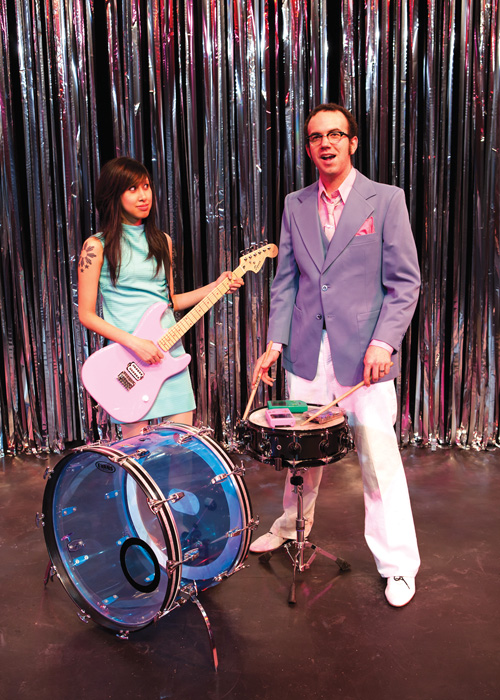 MUSIC Technology can be so existentially mystifying. One minute you’re a kid in the back seat of your parents’ car with thumbs aimed and eyes glued to the screen of your modern handheld gaming console, the next you’re on stage with blinding lights and an audience, smashing into a modified old-school Gameboy on a snare drum. One second you’re doubled over in bed with the stomach flu, the next you’re in a box on Google+, simultaneously interviewing two band members from their respective Bay Area cities.

It’s enough to melt your mind, and we haven’t even begun to discuss those Gameboy modifications. Chiptune or 8-bit music is nothing new — nerded out musicians have been tinkering with the sounds on gaming consoles since the products hit the shelves in the 1980s — but now the music has the distinction of being both technologically advanced by some standards, and vintage, given its nostalgic sound.

Plus, in these financially-strapped times, it’s an economical way of creating music. “You don’t need anything fancy to make it,” says drummer-synth programmer Matt Payne. “The equipment is dirt cheap and it’s so accessible.”

Chiptune community outreach is big for him, Payne adds from his home in Oakland, holding up a mutant Gameboy with a blinking fuzzed out screen. He and musician-@GAMER magazine associate editor Lizzie Cuevas make up Bay Area-based 8-bit band the Glowing Stars. Cuevas, joining us in the Google+ video chatroom from her office in Daly City, agrees that once people see a live chiptune band, they’re usually inspired to try out the technology themselves. “We always have people who come up at shows and ask, ‘how do you do it?'”

The duo has demonstrated just how they do that at the Maker Faire and Pulse Wave SF — a friendly monthly gathering for chiptune bands. Up next, they play the free CONVERGENCE International Alternative Music and Arts Festival at the Japantown Peace Plaza.

Cuevas and Payne met in 2005, each playing in different punk bands. Payne joined Cuevas’ band (Sputterdoll), which broke up a few years ago. “We knew we wanted to do something video game related, we just didn’t know exactly what,” says Cuevas.

Payne had futzed with a program called LSDJ (LittleSound DJ) when it first came out, but hadn’t been serious about it initially, he says. “There’s a learning curve, it’s one of those easy to learn, difficult to master things.” With the new band starting up in 2010, he began gathering Gameboys and filling them with his own sounds. Given Cuevas’ affinity for early Weezer, the music they make is poppy, but it also has that nostalgic synthesized MIDI sound.

“There’s a misconception about it, that we’re using samples from video game somehow or that we’re doing something using actual songs from video games,” says Payne. “But what we’re actually doing is basically stripping down the console to a little sound making computer and getting it to play back our music.”

The process works like this: Cuevas writes the first skeleton of a song on guitar then sends it to Payne. He then programs it using LSDJ and loads it onto the Gameboy for that 8-bit transformation. They ping it back and forth, adding layers to the song. Payne also just started making music with a Sega Genesis — you can make chiptune on any console — so that might come into play soon.

Live, Cuevas sings and play distorted guitar, and sometimes taps a fresh Gameboy, like in the song “Bounce Bounce” where she solos over the final instrumental part. Payne plays drums and, occasionally, picks up the keytar. He also keeps his modded Gameboy on his snare, which has only once caused significant damage.

“I hit it with the drum stick — it made a loud, awful noise,” he says.

Cuevas smiles and replies, “I think you lost a chunk of your Gameboy.”