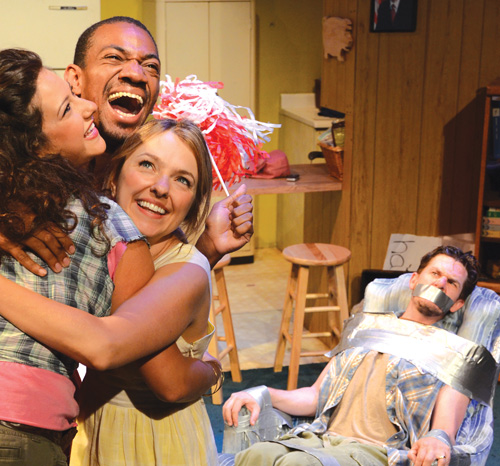 THEATER A sweet, normally placid Southern working-class wifey named Nan Carter (Erin Gilley) — no relation to Jimmy, but oh how for some reason she wishes! — takes revenge on her abusive husband Kyle (Patrick Jones) with the help of two close friends, a roll of duct tape, a fresh deer carcass, and a working knowledge of the dramatic arts in Crowded Fire’s world premiere of playwright Lauren Gunderson’s light but witty comedy.

Taped to a ratty living room chair as the play opens, Kyle (a scruffy, gruff, gritty charmer in Jones’s skillful rendering) is getting his comeuppance in the form of a theatrical performance. Center stage is aggrieved wife Nan as herself, with admirable supporting work from new pal Sweetheart (Andrea Snow), a.k.a. Peaches, a stripper and amateur thesp who plays “Kyle” in a series of scenes meant to detail the real Kyle’s wicked ways, and make manifest Nan’s heretofore disregarded perspective. Out of the wings and through the front door also comes Simon Beaufort (Reggie D. White), Nan’s longtime best friend and champion as well as somewhat bitchy cheerleader (complete with pompoms).

Meanwhile, Kyle is prepped with hunks of venison and plastic bottles of honey for the bears that apparently still roam the mountains of North Georgia. His instinct, under the circumstances, is to pitch some overdue woo to his wavering wife, as fast as possible. Hence, more or less, the title of Gunderson’s play, which repeats a famously evocative stage direction in Shakespeare’s The Winter’s Tale. The play has less to do with Shakespeare per se, however, than the role of imagination and theater as a vehicle for personal and communal transcendence.

Not to put too fine a point on it. Exit is a spirited comedy, able and clever, with likeable performances under Desdemona Chiang’s sure direction. There’s a trickle of treacle running through it, but Gunderson has a fine way with comic dialogue and demonstrates restraint in the sentiment department, while pivoting respectfully around the subject of domestic violence. At the same time, the invention and exploration feel tame for all the wild life running around the text — which also includes more arbitrary flights, like Nan’s emphasis on the words and quote-unquote wisdom of former president Carter, which flavor her dialogue like a sweet but vague slathering of peanut sauce. Moreover, the plot never holds much in way of suspense, the moral coming way out front. In fact, this easy pleasures here bring to mind another new play running on a local stage just now (and not just for its animal-imagery magnetism), Kim Rosenstock’s adept but ultimately glancing dramedy Tigers Be Still at SF Playhouse.

EXIT, PURSUED BY A BEAR