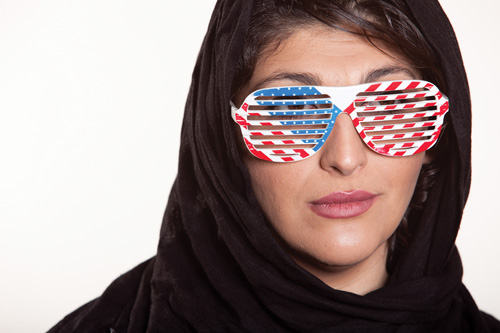 THEATER Onstage, a woman and her father battle over modern sensibilities versus religious tradition. The father leads with a left jab and the mantra “in the Koran, in the Koran, in the Koran,” which the daughter counters with a roundhouse punch and “third-wave feminism.” Both characters are being played by Zahra Noorbakhsh, a feisty, spirited, thoroughly modern woman — and a Muslim, an important part of her identity she’s not about to let anyone forget. But believing in God doesn’t mean your interpretation of “God’s law” is going to be the same as your parents’, and her notion that her long-distance, white, atheist boyfriend Duncan ought to move in with her, purely for reasons of economy of course, is not a prospect her devout Iranian parents can whole-heartedly embrace.

“It’s against the Koran, man,” her father states definitively. “What you want me to do?”

What he will do is the greatest draw of the show, provocatively entitled All Atheists Are Muslim, which made its New York International Fringe Festival debut to a sold-out house on August 12, weeks away from the tenth anniversary of 9/11 — a date most New Yorkers are all too aware of. Not that Iran has anything to do with that particular date (even George W. wouldn’t go that far), but the intricacies of Islam are nonetheless of enduring topical interest.

“Growing up Muslim-Iranian, I had to constantly, vehemently defend my faith, my culture, and my family everyday,” Noorbakhsh reminisces. Even today, people she is close with freely equate “Muslim” with “terrorist” in polite conversation — even people who have seen her show and know her personally.

Deciding to apply to the New York International Fringe Festival seemed like a logical way to bring her comedic message of tolerance and inter-cultural exchange to New York, especially after having accompanied her director W. Kamau Bell to the 2009 Fringe to run tech for his show The W. Kamau Bell Curve: Ending Racism in about an Hour. After several months of meeting deadlines for program blurbs, participant fees, and tech specs, Noorbakhsh and her “Authorized Company Representative” (also her atheist boyfriend) have been tirelessly navigating the Fringe from the clusters of black-box theaters that dot the brownstone landscape of the East Village.

Working the post-show crowds of her own and others’ shows, Noorbakhsh exudes big sisterly camaraderie and casual confidence rather than rehearsed marketing speak, and a good percentage of her audiences has been made up of fellow performers — a true sign of Fringe success. Of course the run hasn’t been without its surprises. One front-row audience member abruptly refused to be “converted” (“It says right on the postcard that the first three rows will be converted to Islam,” Noorbakhsh points out with amused exasperation). Along those lines, the emphasis placed on handing out postcards as marketing strategy was a surprise; “in San Francisco, it’s a faux pas,” she says of the practice in the local comedy club scene. Above all, her major sense of frustration has come from trying to attract fellow Persians to the show, a difficulty she has not experienced in California.

“In San Francisco I’m an active member of the Persian community,” she explains. “I’m vocal and participate in many organizations. [In New York], nobody knows me outside of this very bold, divisive, and controversial title.”

That many Iranian-Americans she knows identify as atheist rather than Muslim, distancing themselves as much as possible from Iran’s Islamic regime, is certainly part of the obstacle. It seems it’s not just misguided Caucasian theatre-goers who are guilty of confusing “Muslim” with “terrorist”

“This fear of the word Muslim has to stop,” Noorbakhsh opines. “We’ve got to point out how much people flinch at just the word and how horrifyingly racist and damaging that demonization is.”

At Noorbakhsh’s last show of her New York run, a record 20 people are turned away at the door (including, alas, the long-awaited Persians), and the packed house roars appreciatively at her lovingly-skewered portrayal of her foul-mouthed father (“What the shit hell is this, man?”) and her winsome mother, who offers to buy her a Persian rug if she’ll just get married already. Leading the audience through the terms of the compromise they all agree to in order to preserve the peace, Noorbakhsh makes it possible for the audience to fall in love with her tradition-bound family despite their initial resistance to Noorbakhsh’s American-born sensibilities.

And how do her parents feel about Noorbakhsh’s audiences? “They usually sell my tickets,” laughs Noorbakhsh. “They love it.”

ALL ATHEISTS ARE MUSLIM