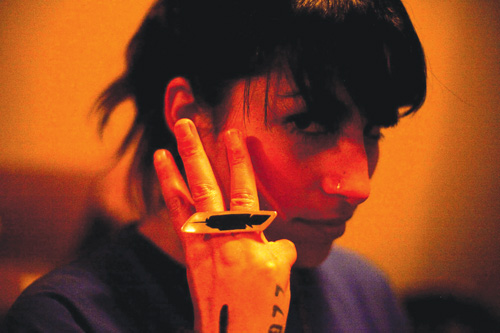 MUSIC “I know I don’t speak English good, but I make music. So fuck it.”

Half the audience can’t understand a word of her songs, but it hardly seems to matter — Chilean emcee Ana Tijoux is killing it onstage at her recent show at Moe’s Alley in Santa Cruz. The tiny rapper stalks around confidently in an outfit you’d probably read about in M.I.A.’s style book; an oversized blue T-shirt, athletic high-tops, and psychedelic, geometric black-and-white tights that I promise you cannot be found in this country.

The band surges behind her as she launches into her breakout single “1977,” about the year she was born, living with politically exiled Chilean parents in Europe during Augusto Pinochet’s brutal dictatorship. “Todo lo que cambia lo hará diferente,” she chants in the song’s chorus — that was the year that everything changed.

Tijoux’s banter is in English (don’t believe the self-deprecation, she speaks it rather well), but her flow is español puro, tight verses that, when you’re unable to keep up with their meaning, impress anyway with their complex structures. When she slyly throws out that “fuck it,” the crowd kind of freaks out. They love her, they get her.

It doesn’t make sense, really. The power of hip-hop — the most verbal of all musical genres — is in the meaning of the lyrics. How many non-English-speaking emcees make it big in the United States? Even Dizzee Rascal had trouble over crossover appeal and his first language, at least, was English. How do we interpret an emcee like Tijoux appealing to music fans who can’t possibly be tracing the metaphors in her verses? I Skyped Tijoux last week to get her take on things.

“The music industry convinces you that you’ll never be popular [performing] in another language — and in rap, even more,” Tijoux says, sounds of children playing in the background of her phone call. “But it’s about music in the end. Hip-hop is international, it’s the language of flow.” She says she was nervous before her US debut at South By Southwest in 2010, she thought that maybe people wouldn’t have the patience for an emcee that spat in another language.

But experience has calmed her doubts. Tijoux has since played stages from New York to Outside Lands 2011 — not to mention gigs across the world. She says she finds common threads of hip-hop counterculture wherever she goes, but is still surprised by regional variances, like Cuba’s cumbia inflected music.

Tijoux returns to the Bay next Sunday, September 11, a show at the Regency Ballroom with Venezuelan disco rockers Los Amigos Invisibles and members of Tijuana electronica-norteño group Nortec Collective.

“Sometimes it’s frustrating not being able to communicate with some people. It’s not about trying to have more crowd or market, it has to do with the number of people you can share a message with. If that means rapping in Chinese, fuck I will do it.” Sounds good — so when are her verses in English dropping?

“When it’s natural I will do it.” She’s freestyled in English before she says, but it’s not a pretty picture. I guess her monolingual California fans are going to have to wait for the next tour to be able to sing along with Ana.

But in place of new English cuts she’s keen, it turns out, on lending her flair to another crew who could use some help these days, um, communicating. What’s up, United Nations?

“Yeah! Contract me right now,” she laughs. “I’ll do all the translations in rapping.”