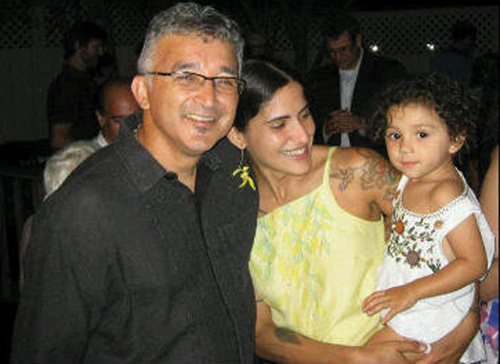 By Roberto Lovato and Jason Ferreira

“I’d love to see a garden of flowers there,” whispered Eric Quezada a few days before his final breath on Earth. Looking like a Guatemalan Quixote, a lanky Eric pointed to the front of his Bernal Heights home with an index finger whittled down by a cancer he’d been fighting ferociously for seven years.

Days later, about 150 people brought pots packed with daisies, bougainvilleas, lavender, lots of red roses — and a bright bouquet of candles to bear witness to the life and friendship of a man who had planted his gentle way into our thoughts, our actions and—most especially—our hearts. To see the tearful and trembling faces of the diverse crowd — former Salvadoran revolutionaries, African American internationalists, soccer buddies made over a lifetime, immigrant rights advocates, Aztec dancers, Guatemalan family members, long time and recent Mission residents, queer leaders and the (Latino) Man Who Would Be Mayor — was heartbreaking. But at the same time we were all shining forth the beautiful Mission that Eric spent a lifetime steadfastly tending to with love.

A true revolutionary, our friend, our brother, who died Aug. 24 at 45, Eric Quezada, lived and died organizing his community, La Misión.

San Francisco and the wider community lost more than just a housing activist, a former candidate for supervisor, and an extraordinarily effective standard bearer of the left. We lost a husband-father-son-brother, a loyal friend and mentor, and a spiritual-political figure whose sources of beauty only became obvious after he gently touched you.

The son of Carlos and Clara Quezada, two Guatemalan immigrants known to many Mission residents as the dynamic duo that birthed two soccer stars (Eric and older brother Carlos) and owned CQ Bike shop on 24th Street, the very soft-spoken Eric lived to bridge the human and the political.

Traveling as a child between a San Francisco on the verge of the silicon revolution-based gentrification wave and wartime Guatemala, Eric developed early on a sense of the emotional and political circuits connecting movements and people on the insurgent continent of América. He grew up hearing stories of very involved and engaged family members like aunt, Ana Maria Quezada, who was arrested for protesting and organizing in Argentina during the 1978 World Cup, and his parents, who lived through the military coup that ousted democratically-elected Guatemalan President Jacobo Arbenz. “I remember hearing stories about Arbenz,” Eric once told us, adding, “—and how the U.S. sponsored the coup.”

Eric’s unique vision was also born out of the racism –and the resistance to it-back home in the Bay Area. Eric often talked of how his mother and he once witnessed two police officers harassing several young African American boys in the parking lot of a convenience store. Clara immediately took the officers to task for their racism, refusing to leave until they left the young boys alone. Eric never forgot his immigrant mother’s courage, her transcendent lesson: always stand alongside those who face injustice.

“Eric is a continuum,” fellow organizer and beloved compañera, Lorena Melgarejo, said. “His beliefs, his commitment didn’t stop in public. They are deep in how he thought about life. As a dad, as a friend, as a lover- that’s who he was,” said Lorena.

After Eric told her when they first met that he didn’t want to burden her with his cancer, Lorena responded: “You have no right to stop your life, you can’t close the door to life!” After that, they were never apart. Embracing life, one filled with no regrets, they fell in love immediately. A few years later, upon the arrival of their beautiful daughter Ixchel, Lorena reminded the larger-than-life, activist father that, “You can’t put your personal life on hold because there’ll always be an event, a meeting or some crisis in the world.”

As was obvious to anyone who really got to know him, one of Eric’s primary connectors to that wider, crisis-filled world of politics and culture was something seemingly apolitical: soccer.

“His politics were like his soccer playing,” explained Eric’s uncle, Edgar, who formed an important part of the Sagastume soccer dynasty in late 20th century San Francisco. “When Eric played, he was cool, but tenacious, hard working. He trained meticulously and never gave up. Eric was fond of saying how he “learned about the politics in different countries—Croatia, Greece, Mexico, El Salvador, England, all kinds—from playing in the San Francisco (soccer) leagues. You learned international relations and neighborhood politics at the same time.”

Such a schooling made Eric a ferocious ally of Central American revolutionary movements including the URNG in Guatemala, Sandinistas in Nicaragua, and the FMLN in El Salvador. These same commitments also served him well as a leader in the Venceremos Brigade to Cuba, where he met Fidel Castro, famously causing the Cuban leader to become nostalgic when asked about his memories of meeting Malcolm X in Harlem. Later, in 2002, he met with Hugo Chávez in Venezuela. They talked about everything from 21st century socialism to baseball. Beaming with the pride that only a lifelong—not fair weather—fan can display, Eric swore that Chávez was a huge fan of the San Francisco Giants.

The eclectic internationalism Eric envisioned and embodied was always two-way. He always strived towards reciprocity. Through Grassroots Global Justice and his work at the World Social Forum in Porto Alegre (Brazil), Eric sought to bring to the international stage the struggles of working class San Franciscans: day laborers, the homeless, people with HIV, and undocumented immigrants.

Eric’s journey reflected that of his mentor and dear friend, the legendary Bill Sorro (who himself died of cancer four years ago this very week). Both Bill and Eric were revolutionaries largely unsatisfied with the traditional rhetoric and disarming anger of the left. “We don’t struggle because we hate, we do so because we love. Yes, we may hate oppression but in the end we are fighting for something, we fight out of a place of love.” Eric never wavered in this.

Eric was a jazz man. A saxophone player, he believed in the art of improvisation and experimentation. At a time when the left was floundering, Eric brought a musical spirit to the necessary work of strengthening dialogue, analysis, and education in the community. He co-founded the Center for Political Education (San Francisco’s equivalent of the legendary Brecht Forum), which has served since 1998 as a catalyst for more effective organizing and as a space to build bridges.

Eric understood the centrality of compassionate bridge-building to political success. And like one of his heroes, Monseñor Oscar Romero, he will in his death rise again in his people. For Oscar Grande, a young community organizer with PODER, a Mission-based Latino environmental and economic justice organization, “Eric was instrumental in bringing radical politics and a visionary spirit to Mission politics,” said Grande.

Eric’s involvement in city politics was less about winning elections and electoral power than about the process of teaching the community how to deal with the powers that be. “He was about ‘let’s re-write the laws and get rid of the bums at City Hall so we can get the things our community needs: housing, open space and recreation opportunities at the material level,'” Grande said. But, according to Grande, who describes Eric as an “older bro/mentor,” Eric’s greatest contribution was spiritual.

“There are fewer and fewer schools of politics, places where you learn how to do politics,” said Grande. “Most of those that are still around in the Latino community are about deal-making, cozying up to the politicians. Eric offered an alternative. The spiritual and the political were always there. Those other fools started from the top-down. Eric started from the bottom up.” This was a key principle of the Mission Anti-displacement Coalition that Eric was instrumental in establishing.

During the last five years of his life, Eric’s bottom-up, interconnecting philosophy was realized at Dolores Street Community Services, a housing and community advocacy organization. For Wendy Phillips, longtime friend of Eric and DSCS Interim Executive Director, Eric was instrumental in securing real housing and other resources for different groups and in connecting DSCS and the Mission to immigrant rights, LGBT rights, and other struggles of our time.

“I think helping create MAC was a huge accomplishment of his because it stopped the massive wave of gentrifying capital entering the Mission. He and MAC mobilized hundreds of people to resist and show the board of supervisors and Mayor that the Mission wasn’t going to go down without a fight.” Their efforts resulted in a community rezoning process that has prioritized the creation of affordable housing in the Mission.

Phillips also noted that, while at DSCS, Eric also spearheaded the creation of the San Francisco Immigrant Legal and Education Network, a network of thirteen organizations that provide free legal services for immigrants, and, of course, advocacy. As if describing his soccer-inspired cosmopolitanism, she said, “Before it became obvious to most, Eric sensed that things were getting really bad on immigration and decided to create SFILEN, which unites Latino organizations, African organizations, Arab organizations, and Asian organizations in an effort to defend immigrants citywide.”

Eric’s defense of — and offensives in — La Mision continues to reverberate in and beyond his beloved neighborhood. “My campaign is really reigniting and reasserting the movement that Eric Quezada helped to build and grow,” said John Avalos, a serious contender in the upcoming Mayor’s race. Avalos, who has dedicated his campaign to Eric and his family, believes that Eric best symbolizes the continuation of the “movement of the people to build power against the downtown forces of gentrification and create livable neighborhoods where people can live with dignity.”

Eric Quezada spent his last days accompanied by loved ones. Along with Lorena, Ixchel and his mother, Eric was tended to and accompanied at his bedside by soccer buddies, family members, his closest personal and political friends, all of whom joined him in taking in the soothing sounds of his favorite music: guitarist friends playing boleros and bossa nova, CD’s of Los Lobos and Jorge Drexler, whose song “Todo Se Transforma,” (nothing is lost, everything is transformed) gave solace to Eric until his final breath. From the vantage point of our present heartbreak, it gives the rest of us hope.

In the lingo of the Latino and Latin American musical and political movements that informed Eric’s thought and action and his life in La Mision, “El Compañero Eric Quezada murio conspirando,” Comrade Eric Quezada died conspiring.

While in English the word “conspire” means to “make secret plans jointly to commit an unlawful or harmful act,” in political Spanish the word has an almost opposite meaning. Conspirar is closer to the Latin roots that combine con, meaning “together,” and spirare, the word for “breathing” and the origin of the word, “spirit.”

In this way, Eric conspired for a better world. After his last breath, he has left us a great spirit. We love you, carnal. Compañero Eric Quezada PRESENTE! La Lucha Continua!!!

Those wishing to help Eric’s family can donate to the MAF — Ixchel Quezada Education Fund, http://missionassetfund.org/ixchel)