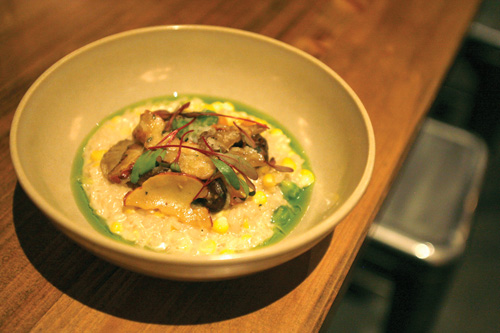 DINE Among the reasons to regret the passing of Enrico’s and its replacement by Txoko is that “Enrico’s” was pretty straightforward to pronounce, whereas the new endeavor, with its impossible juxtaposition of t and x — the spelling equivalent of dividing by zero — does not seem to be. Txoko, despite its modest five letters, has the look of what Sam (having heard Dwarvish spoken for the first time) called “a fair jaw-cracker” in The Lord of the Rings. The good news is that “tx” is pronounced “ch,” so the restaurant’s name is “choke-o,” which sounds like the stage name of a particularly menacing rapper.

As a cultural signifier, “tx” tells us that we’re in or near the Basque country, and I know this mainly because I love the wonderful white wines produced in Spain’s Basque provinces from the Txakoli grape. (The same grape is now grown in Chile and spelled, mercifully, chacoli. ) The wine — Txoko offers a lovely example from Uriondo for $9 a glass — is sharp, bright, minerally, and sour, about as close as a white wine could be to lemon juice passed through a gravel filter. This could be an acquired taste, and if so, I’ve acquired it. The Basques, incidentally, are a singular people; their language is not known to be related to any other in the world, and their Iberian origins are believed to run back 40,000 years or more, to a time when early homo sapiens sapiens and the people we know as Neanderthal might have coexisted and perhaps, as judge advocate general types like to put it, fraternized.

Enrico’s always had a slightly fraternal air for me, and the new regime doesn’t seem to have changed much about the space’s appearance. It’s still a dark, stage-like vault, with a concave face of window glass that looks south, soaking up all the available sunlight like a snowbird in Florida on a weeklong January holiday. All the daylight streaming in makes the interior seem that much darker and lounge-like; it’s as though you’re looking right at a flashbulb as it goes off.

Chef Ian Begg’s menu deals mainly in small plates, among them pintxos, the Basque edition of tapas. There’s only one main dish offered: a $65 ribeye steak for two, which might be a sort of oblique answer to Zuni Cafe’s roast chicken for two. A giant steak sounds pretty all-American, and indeed the tone of much of the rest of the food is mainly Cal-Med: grilled Delta asparagus ($9), for instance, topped with a fried egg and a marvelously cheesy green garlic hollandaise sauce. There are various ways of dealing with asparagus’s grassiness if, like me, you’re not wild about it; Begg’s pincer movement — grilling plus a heavy wash of fat — was most effective.

A wild mushroom empanada ($5), rather pastry-ish, did have an Iberian flair, along with intense fungal flavor. Equally fungal was the wild mushroom arroz ($10), similar to a risotto but with a powerfully concentrated reduction (from chanterelles, baby shiitake, and hen-of-the-wood) that hinted at soup. A batter-fried squash blossom ($3) seemed rather Italian; this version was stuffed with herbed ricotta and presented on a toasted levain spear, with a smear of goat cheese nearby.

One of the more striking items turned out by the kitchen wasn’t even a headliner on the menu card. It was the summer squash and tomato tartlet that accompanied a tiny fist of grilled lamb loin chop ($11). The lamb itself was flavorful and juicy, though slightly complex to eat, despite its size, because a bit of bone that had to be carved around. But the tartlet was a small masterpiece, a kind of ratatouille napoleon reminiscent of the pièce de resistance in the Pixar movie Ratatouille. It looked like a tomato-slathered disk, but under the tomato cap was the summer squash, thin coins carefully arranged into coiling strands, like DNA. The bean salad accompanying a small filet of butter-braised halibut ($12), by contrast, was much more free-form, in fact totally free-form, though several of the players were notable, among them fava beans, fresh chickpeas, and sea beans, an unusual edible that could pass as a cross between kelp and asparagus.

In keeping with a strong recent trend, desserts are excellent. We warmed to a date bread pudding ($8), which had the velvet-sponge consistency of angelfood cake and was finished with a pair of mock-savory witticisms: a sail (stuck into the top) of latticed chorizo crisped like a tuile, and a smear of black-olive caramel sauce, a clever recasting of that current vogue item, sea-salt caramel. The gâteau Basque ($8) also made imaginative use of an herb, thyme, we usually associate with the savory; here it was combined with peaches into what amounted to a fabulously moist clafoutis, capped with crottin of Straus frozen yogurt. Easy on the jaws.