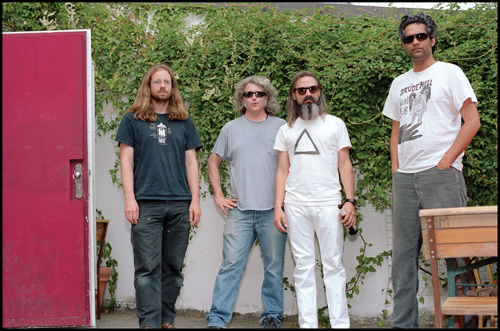 MUSIC There’s a certain irony to the fact that Wooden Shjips’ forthcoming Thrill Jockey long-player is titled West, considering the once firmly SF-based foursome has started to scatter across this storied region. Guitarist-vocalist Ripley Johnson has resettled in Colorado — when he isn’t touring the globe with wife Sanae Yamada as Moon Duo — and drummer Omar Ahsanuddin recently relocated to LA. All of this gives West — its cover art depicting the symbolically loaded Golden Gate Bridge — a particularly powerful charge for this band of musicians who grew up in the East Coast and Midwest and share a fascination with Left Coast mythology, culture, and music.

“Looking at the bridge, I don’t look at it as ‘goodbye’— I see it as ‘hello,'” explains organist Nash Whalen, paging through Hermann Hesse’s Steppenwolf and sunning himself on an Astroturf-clad parklet, in front of Farley’s on Potrero Hill. “Being from San Francisco certainly means something to people in the rest of the world — because of the mystique of California and the San Francisco music scene in particular. We all found our way to California — it’s the land of opportunity that I wasn’t going to experience in Vermont. Those are just some of the themes touched on in the songs.”

Those songs are transmitted with amplified immediacy and in-yo’-ear clarity on West —much like the cover image’s picture-postcard familiarity is imbued with a surreal strangeness. Notably, West signifies the first time the combo had worked in a studio with an engineer, a contrast to previous recordings, which were documented on eight-track in the outfit’s practice space. “We didn’t necessarily have good mics, and the room doesn’t necessarily sound good,” Whalen offers. “So there were a lot of elements to our recordings that frustrated us after a while.”

On West, the heavily distorted crunch of opening track “Black Smoke Rise” is beautifully separated from the shaker death-rattle, textures that seemed inextricably entangled in the past. Through the headphones, the effect is less lo-fi garage grind than a well-defined, clear shot of a speedway toward Wooden Shjips’ crossroads of hip-bobbing psychedelia, dream-drone, and charging Krautrock. The dance floor cleared, you hear the Leslie speaker tremelo, tripindicular echo, and spacey backward masking that the Shjips got to use for the first time in the studio, as well as Johnson’s airy vocals, more discernable than ever before and bidding you to take him on a nightmarish ride on the high-propulsion “Lazy Bones.” “Now when you hear a shaker, you don’t just think of it as a shaker,” says Whalen. “You hear it as a shaker in space, it’s going some place, and it’s more dynamic.”

Farley’s was a place Wooden Shjips would regularly sail into when recording West in February with Phil Manley (Trans Am, the Fucking Champs). The base of operations was Lucky Cat Studios, perched at the foot of Potrero’s slope, just steps away from the Guardian.”Yeah, the hardest thing about it was that the studio is at the bottom of the hill, so if we wanted to come up and get some coffee, it was ‘Oh, we have to walk up the hill…,'” quips Whalen, a former engineering geologist who has switched from studying rocks to rocking out full time.

Now, on this seemingly carefree sunny day, Whalen is most concerned with the fires in London: last week, flames consumed the distribution warehouse that housed the new LP. It’s uncertain how many, if any, were lost —”it’s a huge blow to all these businesses, not only bands and labels, but stores and everyone involved,” worries Whalen, who adds that the album will be available at this week’s SF show, ahead of the Sept. 13 release date. “It might be a small inconvenience for us, getting our record out on time, but for a lot of other people, it could be a lot bigger hassle — and devastating.”