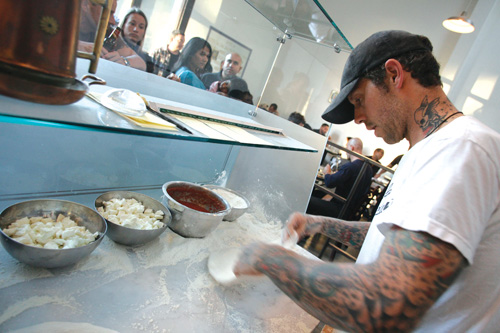 DINE If food is art (probably not, by the way), then Una Pizza Napoletana is probably the closest thing we have to a food-art installation.

This phrase, “art installation,” isn’t exactly euphonious. You install mufflers and software, and (if you’re the new head coach of the 49ers) the West Coast offense. You install a new dishwasher. Art, whatever it may or may not be, deserves a more supple verb.

Picture a white cube with high walls, mostly bare except for white tile wainscoting (rather restroom-y, I thought, but most likely practical). At the center behind the glass podium, a pizza oven of turquoise tiles like a huge Navajo artifact recovered from an archaeological dig. The space, on a nondescript SoMa corner, looks like one of the art galleries you might find in the western reaches of Chelsea, in the part of New York City where the avenues are a little wider, the buildings less tall, and the city feels not quite so breathlessly compacted.

Una Pizza Napoletana’s crowd fits the space: it’s youthful and knowing, ritualistically peering into smart phones, willing to wait for a table at a place that is so plainly and peculiarly happening. Young people don’t want to miss out, it’s their greatest fear.

What they will find missing here is anything other than pizza. That is the menu: pizza in five versions, no substitutions, no polluting table-side condiments like oregano or chili flakes (but salt and pepper, in demure shakers). That is all. No side dishes, soups or salads, no fritti misti, no pastas or roasts. The pizza isn’t sliced for you either; it’s uncut, we might say. Seinfeld had the Soup Nazi (not to mention that lunatic mohel), and we have this.

The maestro of this remarkable production, Antonio Mangieri, can be observed behind the podium manning the oven, wielding his long-handled peel like a medieval knight with a lance. He could be a mime, a figure of soundless kinesis: he stretches, he thrusts, in goes a pie, out comes another, on goes a drizzle of olive oil from his copper urn and a handful of fresh arugula.

It’s hard not to watch his act, because he’s at the very center of things. Also, you’re likely to be quite hungry and wondering if the pizza he’s lifting from the oven might be headed for your table. If it is, you’ll be happy, because the pies, despite their stark lack of trappings are worth waiting for and even suffering (a little) for.

The heart of any pizza is the crust, and UPN’s crusts deserve the ultimate compliment: they could stand on their own, without any toppings at all. They have a slight thickness and focaccia-like sponginess that cuts against current cracker-crust vogue, and they taste quite distinctly of sourdough. It is rare in my experience that pizza crust, even in good pizzerias contributes flavor. Mostly one is attentive to, and grateful for, texture (chewy? crispy?) and the structural question of whether or not the points droop. UPN’s did droop for us a little, but that was probably because we were hacking our way through them haphazardly, so the pieces weren’t symmetric.

Another factor in the droopiness would likely be that the pies are generously laden with toppings. You don’t get a dusting of this and a few gratings of that. These pizzas are loaded. The bianca ($20) for instance, was fitted out with extra-virgin olive oil, garlic, sea salt, at least a dozen thumbs of buffalo mozzarella, and plenty of basil leaves which interestingly accompanied the rest of the pie into the oven rather than being put on after the pie had baked — and were accordingly blistered. Basil’s flavor can withstand rougher handling than that of most other herbs (you can keep pesto made from your summer surplus frozen for months without having it go flat), but I did think that in this case the high heat had diminished the leaves’ fragrant, peppery bite.

The Ilaria pie ($22) by contrast was strewn with fresh arugula leaves, but these were aftermarket add-ons and had not been asked to face a 900-degree Fahrenheit oven. As a result they retained their fresh, nutty flavor, but they also were not well-integrated with the rest of the toppings. Instead they amounted to a mat laid over their accompaniments — a kind of roof to the crust’s floor. Those other toppings included extra-virgin olive oil, sea salt, cherry tomatoes, and smoked mozzarella. I thought the last would be the dominant flavor — smoked anything often asserts itself over other ingredients in the vicinity — but it was mild and muted here.

Service is excellent, and a brief wine list offers several unusual, pizza-friendly Italian bottlings in both red and white by the glass. But I noticed quite a few bottles of Moretti beer on nearby tables, too. If beer matches up with almost any food, then pizza — more than almost any other food — matches up with practically any drink euphoric in nature.