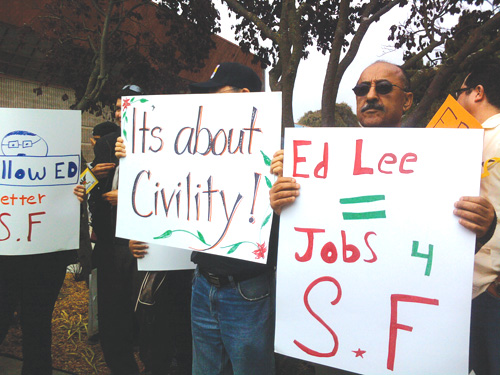 The San Francisco mayor’s race went from a lackluster affair to a dynamic match as the Aug. 12 filing deadline drew near and two prominent city officials who had previously said they wouldn’t run tossed their hats into the ring.

Mayor Ed Lee’s Aug. 8 announcement that he’d seek a full term prompted several of his opponents to use their time onstage at candidate forums to decry his reversal and question his ties to the moneyed, influential backers who openly urged him to run. Several days later, Public Defender Jeff Adachi’s last-minute decision to run for mayor signaled more tension yet to come in the debates.

At this point, eight current city officials are running campaigns for higher office, and the dialogue is beginning to take on a tone that is distinctly more biting than civil. Adachi, who had not yet debated onstage with his opponents by press time, told reporters he was running because he wanted “to make sure there’s a voice in there that’s talking about the fiscal realities of the city.”

Adachi authored a pension reform ballot measure that rivals the package crafted by Lee, labor unions, and business interests (see “Awaiting consensus,” May 31, 2011). At an Aug. 11 candidate forum hosted by the Alice B. Toklas Democratic Club, the San Francisco Young Democrats, and the City Democratic Club, all of the top-tier candidates who were present indicated that they would support Lee’s pension reform measure and not Adachi’s.

“The reforms that I have championed are reforms that are absolutely needed, along with action,” Adachi told reporters moments after making his candidacy official. He added that after watching the mayoral debates, “I became convinced that either the candidates don’t get it, or they don’t want to get it.”

Those fighting words will likely spur heated exchanges in the months to come, but until Adachi’s entrance into the race, it was Lee who took the most lumps from opponents. Even Board President David Chiu, a mayoral candidate whose campaign platform is centered on the idea that he’s helped restore civility to local government, had some harsh words for Lee during an Aug. 11 mayoral debate.

“I do regret my decision to take Ed Lee at his word when he said he would not run,” Chiu said in response to a question about whether he regretted any of his votes. He also said his first interaction with Lee after the mayor had announced his candidacy was “a little like meeting an ex-girlfriend after a breakup.”

Lee, whose pitch on the campaign trail features a remarkably similar narrative about transcending political squabbling in City Hall, became the target of boos, hisses, and noisemaker blasts when a boisterous crowd packed the Castro Theater for an Aug. 8 candidate forum. He received one of the most forceful rebukes from Sen. Leland Yee, an opponent whom Lee supporters are especially focused on defeating.

“Had the mayor said that he would in fact run, he may not have gotten the votes for interim mayor,” Yee said. “Will you resign from your post,” he asked, challenging Lee, “in order to then run for mayor?” Days later, Yee had developed a new mantra about throwing power brokers out of City Hall instead of “wining and dining with them.”

Yet Lee said his decision to enter the race wasn’t because of the push from his backers, but because of how well things have gone during his brief tenure in Room 200. “Things have changed at City Hall, particularly in the last seven months,” he told reporters Aug. 8. “And because of that change, I changed my mind.”

In yet another twist, former Mayor Art Agnos — whom progressives had looked to as a potential appointee to the vacant mayor’s seat back in December, before Lee was voted in to replace former mayor and Lieutenant Governor Gavin Newsom — delivered a surprise endorsement of City Attorney Dennis Herrera shortly after Lee declared. The decision was particularly significant since Agnos first hired Lee to serve in city government, and has a long history of working with him.

“[Herrera] is an independent person who will empower neighborhoods … and won’t be beholden to power brokers,” Agnos said. He also told the Guardian he wasn’t surprised that Lee had opted to run, given the role former Mayor Willie Brown and influential business consultant Rose Pak had played in orchestrating Lee’s appointment.

“Anybody who is an astute political observer saw the signs from the very beginning,” Agnos said. In response to a comment about his unique vantage point as a would-be caretaker mayor, he said, “I would’ve kept my word and not run for reelection.”

Intense focus on Lee’s flip-flop, and on the Progress for All-backed “Run, Ed, Run” effort that was the subject of an Ethics Commission discussion that same week, stemmed at least in part from the threat the incumbent mayor represents to other candidates. A CBS 5-SurveyUSA poll suggested he became an instant front-runner.

Yet questions about “Run, Ed, Run” — some raised by observers unaffiliated with any campaigns — also served to spotlight the candidate’s longstanding ties with backers closely connected to powerful business interests that stand to lose big if their links to city government aren’t preserved.

Retired Judge Quentin Kopp issued an open letter to District Attorney George Gascón Aug. 1 urging him to convene a criminal grand jury to investigate whether illegal and corrupt influencing had occurred when Pak — a close friend of Lee’s and a key driver behind the “Run, Ed, Run” effort — reportedly recruited executives of Recology to gather signatures urging Lee to run.

Recology, which handles the city’s waste, was recently awarded a $112 million city contract, and Lee’s scoring of the company and recommendation to raise rates in his previous capacity as city administrator benefited the company. Brown received substantial campaign donations from Recology in previous bids for mayor. Kopp is the coauthor of a ballot initiative asking San Francisco voters if the company’s monopoly on city garbage contracts should be put out to bid.

Although Kopp told the Guardian that he hadn’t yet received a response from Gascón, DA candidates Sharmin Bock, Bill Fazio, and David Onek nevertheless seized the opportunity to publicly and jointly call for Gascón to recuse himself from any investigation into Progress for All. Gascón has a conflict of interest, they argued, since he reportedly sought Pak’s advice when deciding whether to accept Newsom’s offer to switch from his previous post as police chief to his current job as top prosecutor.

The Ethics Commission determined unanimously Aug. 8 that the activities of Progress for All, the committee that was formed to encourage Lee to run, had not run afoul of election laws despite director John St. Croix’s opinion that it had filed improperly as a general purpose committee when it ought to have been a candidate committee, which would have placed caps on contribution limits.

“The Ethics Commission has spoken, and they’ve supported our position,” Progress for All consultant Enrique Pearce of Left Coast Communications told the Guardian.

St. Croix did not return Guardian calls seeking comment, but an Ethics Commission press release included a caveat: “Should facts surface that coordination occurred between Mayor Lee and [Progress for All], such allegations will be investigated under the Commission’s enforcement regulations.”

At a Lee support rally organized by his official campaign team on Aug. 11, volunteers who arrived with “Run, Ed, Run” materials produced by Progress for All were told they could not display those signs and T-shirts; the same people were on a first-name basis with one of Lee’s campaign team members.

Pressed on the question of whether there was any coordination between agents of Progress for All and Lee, Pearce said the Ethics Commission discussion had focused on whether Lee had been a candidate. “Whether or not he’s a candidate has nothing to do with whether or not he has dinner with Rose [Pak],” Pearce noted. He insisted that there had not been coordination, and that the efforts to encourage Lee to run and to support Lee as a candidate were totally separate.

Sup. John Avalos, who is running for mayor on a progressive platform, recalled at an Aug. 8 candidate forum how things unfolded when Lee’s name first came up as an appointee for interim mayor.

Avalos reminded people that he had called for postponing the vote back in December because he hadn’t even had a chance to sit down and meet with Lee, who was in Hong Kong at the time. With behind-the-scenes deals orchestrating his appointment, Avalos said, “We saw City Hall turning into one big back room.”