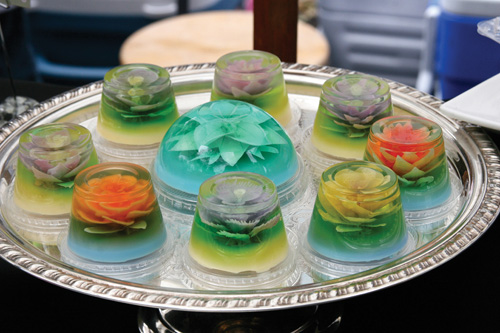 One of these things will be Rosa Rodriguez’ Sweets Collection gelatin desserts: small, sweet cups in which three dimensional flowers bloom, taunting you to stick a spoon in them. I will take them over designer cupcakes any day.

Rodriguez, who now lives in the Mission with her two daughters, is from the Mexican state of Durango. There, large gelatin molds traditionally bloom at birthdays, baby showers, and wedding parties; red roses and yellow zinnias made of condensed milk curling prettily around the faces of happy couples and beaming little girls. When I asked her via email about her San Francisco customers’ most common reaction to her wares, she said it is uncertainty. “They ask if they can eat the flower, or if it’s plastic.”

A La Cocina street food incubator program graduate, Rodriguez will be in the heart of the Mission this Saturday, along with the rest of the sweet and savory offerings of the Street Food Festival’s 60-some vendors. She’ll be selling “fanciful jellos shots” at the festival’s bars on 23rd and Folsom streets, and her more family-friendly concoctions at a stand of her own on the same intersection.

Saturday will entail a lot of eating, and a lot of gawking at fanciful jello shots, and for these reasons alone the day will go very well if you are really, really stoned.

But ingesting marijuana before the Street Food Festival is a delicate matter. After all, the third year of the event will be the biggest yet, its girth spanning eight blocks of Folsom Street, plus parts of 23rd, 25th, the Cesar Chavez Elementary School parking lot, and the Parque de los Niños Unidos.

In past years, massive crowds have marred the day for many an avid snacker — the lines, my friend, the lines. This year La Cocina is hopeful that the vast expansion of the event will stem the tide — but nonetheless it would not do to have agoraphobia derail you just as you are reaching the front of the line at the Kasa booth.

Luckily, there are plenty of San Francisco souls that geek out tailor-making THC regimens for situations like these. I placed a call to one such place humans like this congregate: the San Francisco Patient and Resource Center, winningly acronym-ed SPARC. It just received our Best of the Bay reader’s poll award for Best Cannabis Club and it’s well known for having an extensive selection of in-house strains. It seemed like a fine place to start out.

Nick Smilgys, who has served as the club’s marketing director for over a year now, had two words for me: blackberry kush. Then he had some more. The kush — which he says is traditionally cultivated in Pakistan and India, but happens to be one of SPARC’s signature strains — is a deep-green indica that’ll make you hungry as hell, ready to take on all those Indian burritos and handmade huaraches.

Smilgys says the blackberry buds create “good well being” in their ingester, and result in a nice body high. Of course, he cautions, medicines will have differing effects on different patients.

But if you’re not careful with the blackberry, it could keep you from your improbably edible jello flowers. (Smilgys employed the term “couch lock” to describe a potential blackberry kush effect.) If you’re prone to getting paranoid, he counsels medical marijuana patients to look for a sativa-indica hybrid that tilts to the indica side of things for a more tranquil, crowd-ready high.

Be brave friends, eat the flower. *

Folsom between 22nd and 26th sts. and surrounding area, SF