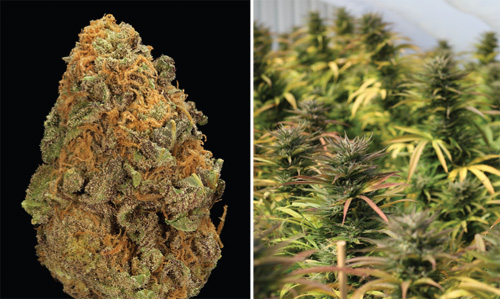 CANNABIS Most marijuana sold in Bay Area dispensaries is grown indoors, where the ability to precisely control conditions creates the kind of buds — strong, dense, crystal-covered, fragrant, beautiful — that consumers have come to expect. But that perfection comes at a high price, both financially and environmentally.

So some local leaders in the medical marijuana movement have begun to nudge the industry to return to its roots, to the days before prohibition and the helicopter raids of the Campaign Against Marijuana Planting chased the pot growers indoors. They say it’s time for California to start growing more of its cannabis outdoors again, in the soil and sunlight, just like the rest of the state’s crops.

Growers have long known how inefficient it is to grow indoors. All they need to do is look at their huge monthly energy bills. Between the powerful grow lights, constantly running air conditioners, elaborate ventilation systems, pumps and water purifiers, and heaters used for drying and curing, this is an energy-intensive endeavor.

But a widely circulated study released in April — “Energy Up in Smoke: The Carbon Footprint of Indoor Cannabis Production” by Evan Mills, a researcher with Lawrence Berkeley National Laboratory — revealed just what a huge cumulative toll the practice was taking on California and the planet.

It found that indoor pot production accounts for about 8 percent of California household energy use, costing about $3 billion annually and producing about 4 millions tons of greenhouse gases each year, the equivalent of 1 million automobiles. Producing one joint was the equivalent of driving 15 miles in a 44 mpg car.

“The emergent industry of indoor Cannabis production results in prodigious energy use, costs, and greenhouse-gas pollution. Large-scale industrialized and highly energy-intensive indoor cultivation of cannabis is driven by criminalization, pursuit of security, and the desire for greater process control and yields,” Mills wrote in the report’s summary.

Yet while opponents of marijuana seized on the report to condemn the industry, proponents say there’s a very simple solution to the problem: grow it outdoors. And with the artisanship and quality in the fields and greenhouses now rivaling that of indoor buds, the biggest barriers to moving most marijuana production outdoors are federal laws and the biases of pot consumers.

“There’s a misconception out there that indoor is better marijuana than outdoor, but we don’t think that’s true,” Erich Pearson, who runs the San Francisco Patient and Resource Center (SPARC) dispensary and sits on the city’s Medical Cannabis Task Force. “Marijuana is a plant that came from the earth and that’s where we should grow it, just like our food.”

There are definitely some benefits to growing indoors, beyond just the ability to hide it from the prying eyes of law enforcement. The grow cycles are shorter, allowing for multiple harvests around the year. The generally small operations and precise control over growing conditions also tend to produce the best-looking buds, which command the highest prices and win the top prizes in competitions.

Kevin Reed, who runs Green Cross — a venerable medical marijuana delivery service that works closely with an established group of growers — told us there are several reasons why indoor buds have dominated the marketplace.

“The most important factor is local laws and regulations and the enforcement of those various laws. A second factor is space and climate — obviously outdoor cultivation will flourish is some places better than other. And, a final factor is sustainability of the market; indoor cultivators can produce crops on a year-round basis, providing some stability in the market over the long-term, especially in the event of crop failure or other unforeseen and unexpected disasters,” Reed told us.

Yet he also said, “If cultivated correctly and with care, there should be no difference between the same strain grown in- or outdoors.” And he said that from an environmental standpoint, outdoor is clearly superior: “So far as environmental factors are concerned, there is little doubt in my mind that outdoor cultivation is kinder to Mother Earth.”

But he and other marijuana experts also say that the quality of the buds ultimately depends on a wide variety of factors, from the strain used to the expertise of the cultivators to the time and care taken by the trimmers.

“I’ve seen outdoor that can compete with the best indoor strains,” said David Goldman, who runs San Francisco’s Americans for Safe Access (ASA) chapter, sits on the city’s Medical Marijuana Task Force, and is active in rating the various dispensaries and pot strains in terms of quality, using magnifying glasses to investigate the trichomes and other characteristics. “I would match the best outdoor I know up with anybody’s indoor, any day.”

Even when indoor buds look better, Pearson said, that doesn’t means they are better. Looks can be deceiving, he said, noting how local consumers now accept that those perfect-looking, genetically modified apples and tomatoes in the store aren’t as tasty or good for you as their ugly, organic counterparts.

“It’s not all about appearance,” he said, noting that marijuana grown in the sunshine is more robust and complex than its indoor cousins.

And that’s especially true when the cannabis is grown in greenhouses, where it gets natural sunlight but growing conditions can be controlled better than in the fields.

“Greenhouses can attain a level of cosmetic attractiveness that is right up there with indoor,” Pfrommer said.

“There are a lot of products coming out of greenhouses that even trained eyes can’t tell the difference with [compared to indoors],” Linker said. “Greenhouses are the future.”

Or at least they might be the future if there is a change in the federal laws, which still view any marijuana cultivation as a crime — which is why indoor grows flourished in the first place.

Rising demand for medical marijuana has created some regulatory pushback, even in pot-friendly San Francisco, where the Department of Public Health announced earlier this year that it wanted to create a registry of growers that work with the dispensaries in order to weed out the illegal growing operations.

“In the last few years, there’s been a proliferation of both illegal and legal cultivators,” Dr. Rajiv Bhatia, San Francisco’s environmental health director, told us earlier this summer. “We’re asking for this information to try to steer them back toward legal cultivation.”

Reed, Goldman, and other industry representatives strongly condemned the move, mostly on the grounds that creating lists of growers could subject them to federal prosecution, so the idea was shelved for now. But Bhatia said the problem remains, and in San Francisco, it’s a problem created largely by the demand for cannabis grown indoors.

But allowing for a more widespread conversion to sustainably grown marijuana will require a relaxation of the federal enforcement to allow for more land cultivation and the development of high-tech greenhouses.

“A lot of that rests in the hands of law enforcement,” Pearson said.

But it isn’t just the cops. Consumers are also supporting indoor grows.

Pfrommer said there are many factors that influence whether customers choose indoor or outdoor, or what he calls the “bag appeal” that causes customers to zero in on one strain among the 40 or so that can be offered at one time.

Generally, indoor grows are smaller operations, allowing greater care in the tending and processing of the buds, whereas outdoor grows usually produce large crops harvested all at once, “so frequently people won’t manicure it as well,” Pfrommer said.

Smell is another big factor, Pfrommer said, and that’s one area where he thinks outdoor actually has an advantage. “Outdoor generally has a more pungent smell,” he said. “Cannabis is very sensitive to the environment, so it can pick up elements from the soil, the wind, and the surroundings. It picks up different qualities.”

For that reason, he also said, “I personally find outdoor to taste better when it’s grown well,” comparing it to the subtle qualities that various appellations can give to fine wines.

The final factor is price, and that’s one area where outdoor has a distinct advantage. SPARC is currently selling quarter-ounces of greenhouse-grown Big Buddha Cheese with a THC content of more than 17 percent for just $70. And when the buds from open outdoor fields arrive this fall, they’ll be as low as $50.

“This,” Pearson said, holding up a beautiful bud of greenhouse-grown Green Dragon, “was grown at a fraction of the cost of indoor and it’s outstanding.”

“That’s why indoor sells for so much more,” Goldman said, ” because it costs so much more to grow.”

So if outdoor cannabis is cheaper, better for the environment, less risky for the industry, and just as good, why are the indoor stains still so much more popular?

“You’re looking a 20-plus years of indoor being the standard,” Pfrommer said, noting that the hardest part of creating a more substantial changeover in people’s buying habits is their expectations.

Yet things are changing, prompted partly by the Mills study. “That was what kicked off this latest round,” Pfrommer said. “There is a small but growing awareness among the regular marijuana consumers about the costs of growing indoors…The consciousness is starting to shift, but it’ll be slow, probably over the next two seasons.”

Harvests usually take place during the full moons in September and October, after which they are cured and processed for about four weeks, finally coming to market around Thanksgiving.

“It’s mostly an education process,” Pfrommer said. “We’re going to have a vigorous push around harvest time this year.”

“We’re trying to transition completely to outdoor because the environmental toll is less, the cost is less, the yield is higher, and our testing is showing that the quality is just as good,” said Nick Smilgys, who has done both marketing and purchasing at SPARC. “It just makes more sense to grow it outdoors.”