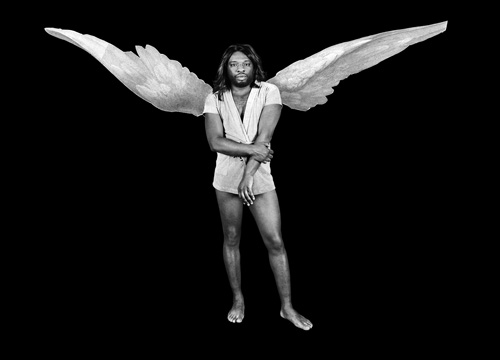 THEATER In 1934, Broadway hosted its longest-running opera to that time, the serenely unconventional Four Saints in Three Acts. The brainchild of writer Gertrude Stein and composer Virgil Thomson, the production famously featured an all–African American cast (for the first time in roles not geared to depicting African American life), a scenic design covered in cellophane, music that mingled hints of Parisian modernism with a boisterous collage of vernacular American forms, and a libretto of unfathomable if evocative wordplay that merrily eschewed narrative — or even consistency with the title (acts were actually five, saints were many). It was weird. And people liked it.

In deciding upon a topic for the opera, Stein had taken on the lives of saints (especially Theresa and Ignatius, who figure prominently) as representative of the lives of artists. It was a secular work, and apotheosis, that ultimately concerned both her and Thomson, neither of them otherwise religious. As it turned out, the opera not only hailed the arrival of avant-garde ideas into the mainstream, but catapulted Stein into the stratosphere of celebrity.

“In Stein’s personal story the opera was a very large chapter,” explains Frank Smigiel, associate curator of public programs at the San Francisco Museum of Modern Art, currently presenting The Steins Collect: Matisse, Picasso, and the Parisian Avant-Garde. “In addition to The Autobiography of Alice B. Toklas, [Four Saints] radically transformed Stein from an experimental writer known for collecting other artists into a popular artist in her own right.”

One good apotheosis deserves another. This weekend SFMOMA, in association with Yerba Buena Center for the Arts, presents Four Saints in Three Acts: An Opera Installation, as part of The Steins Collect. While the exhibition already includes footage and ephemera from Stein and Thomson’s landmark opera (with even more footage on view in the concurrent Gertrude Stein exhibition at nearby Contemporary Jewish Museum), audiences will now have the chance to see a full staging of the work. Meanwhile, the production’s team of collaborators promises as much a re-envisioning as a revival.

This is as it should be, suggests Smigiel, who spearheaded the idea for the revival about a year ago as he and his colleagues were asking themselves how they might expand on the exhibition.

“If you look at all the other artists in the Steins Collect exhibition, they’re all working not just on canvases,” he says, speaking by phone from his office at SFMOMA. “It was a creative community that was crossing disciplines in ways people might not always know about. One of our aims was to rev up the avant-garde energy of the exhibition. There’s a way, when you go to a show with Matisse and Picasso, they can just look canonical now to us. One of the hopes is that there’s still something about Stein’s language and the opera that’s going to have a bit of shake-up to it. It won’t just appear as a rolling out of a canonical piece, and people wondering, ‘What was this again?'”

To that end, Smigiel approached local company Ensemble Parallèle, acclaimed specialists in contemporary chamber opera, having been impressed by their recent production of Alban Berg’s Wozzeck, including its shrewd use of visual media. He also sought out Italian-born, San Francisco–based composer, performer, and musicologist Luciano Chessa, an expert in the period whom he had worked with before. Equally inspired was Smigiel’s call to Kalup Linzy, whose video-performance practice mixes soap opera genre with drag, original songs, lip-sync, and themes of family, community, sexuality, and otherness through the prism of his African American Southern upbringing and later Brooklyn milieu.

After a process of deciding how they might re-approach the work, Chessa landed on the idea of resetting the text that Thomson had excised in his own 1950s version of the opera. The result is its own piece, entitled A Heavenly Act, which will immediately precede Four Saints without an intermission (the entire program will run a fleet 90 minutes). Linzy developed video projections as the predominant visual element in the production.

Chessa and Linzy offered further insight into the collaboration, and their respective processes, during a break from a rehearsal last week. Although neither knew the opera very well before embarking on the revival, each found points of contact and familiarity with their own work.

“I knew it mostly because of [Canadian filmmaker] John Greyson’s [2009 operatic documentary] Fig Trees,” explains Chessa. In conceiving A Heavenly Act, Chessa says he wanted to account for both Thomson’s own musical influences as well as the legacy he has left in the work of later composers.

“I couldn’t be approaching the text naively as if I was discovering it for the first time,” he says. “There is a history of setting Stein in the 20th century, which I ended up discovering by analyzing the work and also the development of Thomson’s fortunes in the 20th century. Because Stein’s text is very wordy, Thomson used the technique of having it chanted. So my idea was to bring this element of chant, but do it in a different way, using different lines of text moving at different speeds, creating clusters of textures.”

Adds Linzy, “We kept things very loose and abstract, kind of organic. It didn’t have to be so strict.” Linzy — who in the production also performs a song Chessa wrote for him set to Stein’s words — shot a cast of friends as angels against a green screen, usually with movement informed by music tracks Chessa had forwarded. But in at least one case, Linzy didn’t receive the track for a corresponding scene.

“There’s a dance scene [in A Heavenly Act] where [Chessa] did a waltz, but we danced to Donna Summer’s ‘Bad Girls,'” explains Linzy. “But seeing it against the waltz, really slowed down, it’s almost like the angels got high off LSD and just went too far. But we were moving to Donna Summer, we were discoing. That’s what I like. He had sent the tracks but somehow I didn’t get that particular one. So I was like, ‘Oh, we’ll just disco it out.’ And so that’s what we did, and it’s the most amazing thing.”