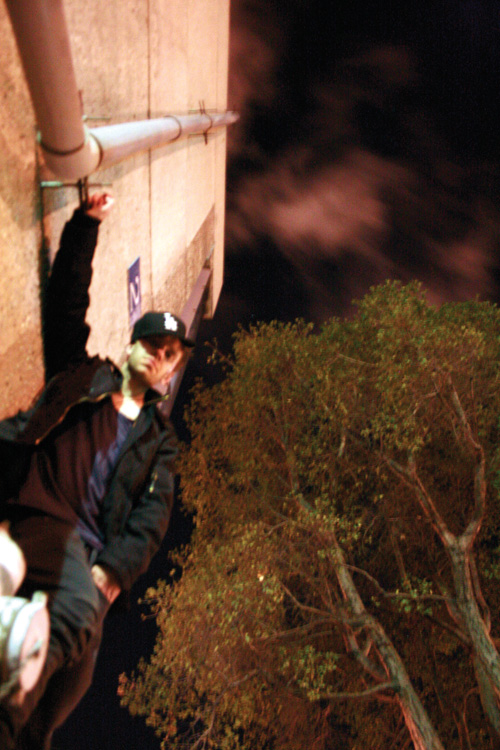 “You know how you can think back to that one night? That punk show or cool house party or the first time you saw Björk, and it’s just, the night you’ll never forget? I want to do that for other people. I want to make lasting memories,” he says from his perch in Four Barrel Coffee as he grabs Rosamunde french fries from his bag.

A DJ since age 12, the 27-year-old also works as a producer and video artist. His next big gig, in collaboration with Tri Angle Records and 120 Minutes club night, is an event likely to stir brain waves: it’s a showcase of witch house — a controversial genre also known, interchangeably, as grave rave, based goth, drag, or “pop music for the unconscious,” as San Francisco producer oOoOO has been known to describe his own sound.

It’s contentious because it’s all over the map. At its most basic, a combination of hip-hop and goth cultures, many music snobs and bloggers declared it dead on arrival. Even those associated with it seem to at least avoid using the term “witch house” itself. It’s said with an apologetic shoulder shrug.

This may be due to its murky origins. Essentially, it was coined by Denver’s Travis Egedy, a.k.a Pictureplane, sometime around 2009, partially as a joke, to describe his own music. Years later, the name remains and the scene is still burgeoning. There are some skilled musicians and producers creating this sound, including a smattering of national acts, and, locally, oOoOO (pronounced “oh”).

For this particularly significant event, Cunningham is working behind the scenes as the producer and co-host along with Marco De La Vega, the mastermind behind year-old witch house club night 120 Minutes at Elbo Room. Both agree that the biggest misconception about this type of music is that it’s already dead.

“It’s still new, it’s what’s happening right now,” says De La Vega. “The goth scene has a tendency to focus very strongly on the past, so all this music was the first kind of stuff where I was like, ‘Wow, this is actually happening, this makes sense for now. This is contemporary.'”

This much we know: those associated with witch house often make use of darker rhythms with creepy melodies over top, chopped and screwed hip-hop or slowed-down pop music samples, along with hypnotic and dark droning synths and howling, reverberated female vocals.

And yet, many musicians identified with this mutating, nearly indefinable genre wage battle against it. They, understandably, eschew the label for fear of pigeonholing.

“The way we look at it is that there are a few bands that were doing stuff independently and have been grouped by people trying to make it in to one cohesive term,” says Bryan Kurkimilis, one half of New York’s White Ring. “It’s nice and flattering to be part of something like that, but we had no genre in our head when we started. We’re consistently trying to evolve our sound.”

“What motivates me, is putting Shlohmo and Babe Rainbow — who aren’t really considered witch house — next to oOoOO, White Ring, and Water Borders even, to show that it doesn’t really matter what the genre is; it’s that feeling, it’s the mood. It’s the place where it comes from,” Cunningham says. *