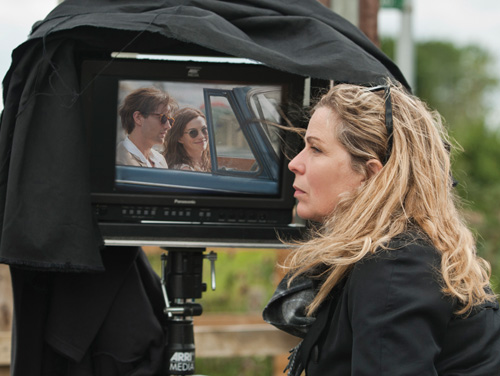 FILM Why do romantic comedies get such a bad rap? Blame it on the lame set-up, the contrived hurdles artificially buttressed by the obligatory chorus of BFFs, the superficial something-for-every-demographic-with-ADD multinarrative, and the implausible resolutions topped by something as simple as a kiss or as conventional as marriage, but often no deeper, more crafted, or heartfelt than an application of lip gloss.

Yet the lite-as-froyo pleasures of the genre don’t daunt Danish director Lone Scherfig, best known for her deft touch with a woman’s story that cuts closer to the bone, with 2009’s An Education. Her new film, One Day, based on the best-selling novel by David Nicholls, flirts with the rom-com form — from the kitsch associations with Same Time, Next Year (1978) to the trailer that hangs its love story on a crush — but musters emotional heft through its accumulation of period details, a latticework of flashbacks, and collection of encounters between its charming protagonists: upper-crusty TV presenter Dexter (Jim Sturgess) and working-class aspiring writer Emma (Anne Hathaway). Their quickie university friendship slowly unfolds, as they meet every St. Swithin’s Day, July 15, over a span of years, into the most important relationship of their lives.

And although One Day‘s story belongs to both characters, the too-easily dashed desires and hopes of a young woman spunkily attempting to surmount age-old class barriers spoke to Scherfig, who immediately thought of her 16-year-old daughter when reading the script. “Emma’s insecurity is an important element for me,” she says now, selecting her words delicately in her interview suite at the Ritz-Carlton. The director hadn’t been outside all day, yet it’s obvious from the way she looks out the long windows before her that she’d love to be free to wander the city.

“There are so many girls who, because of their insecurity, get too little out of life,” Scherfig continues. “You’re so worried about how you look at some family event you almost forget to enjoy looking at everybody else, and what you learn over the years is that people aren’t as critical as you think. The more you get out of whatever surroundings you’re in the happier you become. I think that’s something in your 20s — you sort of have to grow up one more time, which is a major theme of this film.”

In contrast, Dexter is the cute, rumpled brat who can’t be bothered to figure out who he is or what’s truly important to him. “He neglects himself, and he doesn’t try to find out what it is love can be,” says Scherfig. “And it’s meaningful, much more meaningful than your generic romantic comedy where the characters are very much alike, though it’s a different kind of pleasure to see those films because it’s almost like a dance. It’s the variations that you enjoy.”

Despite the blue-collar female lead and UK backdrop that it shares with An Education, One Day feels like a departure for Scherfig, who first found international attention for her award-winning Dogme 95-affiliated Italian for Beginners (2000). From where she’s sitting, she has few preconceptions about rom-coms in general, and how they can sometimes seem like a cashmere-lined ghetto, the cinematic equivalent of a Jane Austen writing corner, for U.S. women directors such as Nicole Holofcener, Nora Ephron, and Nancy Meyers.

“The love itself is what the film’s about, and the facets of it, and where it’s meant to be. Hopefully, [it’s] a classic, emotional love story,” she says. “That, I’ve never done. And this time, it was, let’s go for it. I didn’t feel like I had to fight it at all. Of course, this film has a substance that I felt when I first read the script. But yeah, I wish romantic comedies would attract the best possible directors, the best possible writers because it can be a wonderful genre.”

Her kinship still appears to lie with Dogme moviemakers and their embrace of the unpredictable and dismissal of lighting, props, and costumes (just try to picture a Pretty Woman-style shopping orgy working within those guidelines). “[Dogme] gives me a confidence that I can work on much lower budgets, so I enjoy the luxury of having a higher budget,” she says with a chuckle. “With this film I felt so fortunate that we could get that many period cars and that many music tracks and that caliber of actors in bit parts, so I really feel grateful, because I’m not used to it. This is the biggest budget I’ve ever had.”

Scherfig sounds genuinely humbled, giving off just a glimmer of the young woman that once had to scrape together state funding for her debut, The Birthday Trip (1990). “With [One Day] — even the crew would talk about it as we shot it — we felt privileged to work on a film that had the ambition of being nuanced, in a year when a lot of films had to make money.”

Filming love in the cold climate of the Great Recession has been less of a challenge after An Education, and Scherfig’s not ready to leave Europe yet. She’s set to direct Music and Silence, based on the novel by Rose Tremain, which brings together an English lute player and a Danish servant in the court of Christian IV of Denmark. But after that, America looms in the horizon: namely, a mafia project with Jessica Biel set in New York’s Lower East Side in the ’60s. “I know I’d like to do genre,” she exclaims. “It’ll been great to do something that’s even more cinematic, less character-based, more technical, and more plot-oriented. You won’t be seeing a romantic comedy!”