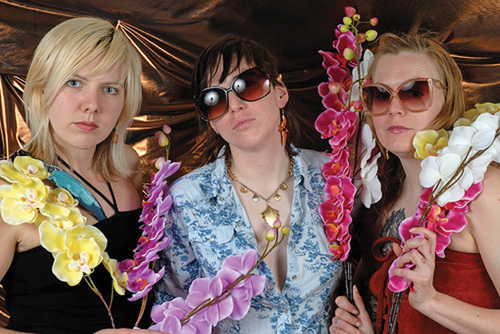 SOUND TO SPARE For some gays the definition of a good night out dancing isn’t Katy Perry, Lady Gaga, or whatever else is making it in music’s top 40 these days. Instead, we go against the grain, defy the unwritten rules, and satiate our dance floor needs to more primal, aggressive tunes. Enter Erase Errata.

Listening to the San Francisco rock trio recalls a time in my youth when I transitioned out of baggy JNCO cargo pants and tingly, mind-numbing pills into the stark contrast of a much grittier, more realistic yet still liquor-soaked world of sounds. Through them I was encouraged to picture myself alive and dancing. Though I was thousands of miles away from the creature they so vividly described in the song “The White Horse if Bucking,” I somehow knew that greener pastures lay ahead, bucking and all.

Launched in Oakland in 1999, categorized as lesbian post-punk anthem-makers or no-wave revivalists, and responsible for some of the most contagious dance-rock albums (Other Animals from 2001 and 2003’s At Crystal Palace), Erase Errata is back, sharing a bill with longtime friends, local trio Bronze, at the Fri/12 release show for Bronze’s first full-length, Copper (RVNG Intl. Records), coming out September 13.

I recently sat with Erase Errata’s Jenny Hoyston and Bronze’s Rob Spector at the bustling Duboce Park Café, sipped tea at an outdoor tables. I imagined it must be a little weird for Hoyston, who just spent three years in Portland, Oregon living life as a full-time “upper-lower class accountant,” to return to music and live in a slightly different San Francisco. We touched on the recent changes the city has gone through since her absence — local music institutions like KUSF and the Eagle Tavern’s Thursday Night Live are either struggling for existence or have disappeared altogether. However, they both agree that there are too many creative types in the Bay for the scene to be successfully shut down.

They shared horror stories of Erase Errata’s otherwise triumphant reappearance at Public Works during San Francisco Pride, when New Orleans sissy bounce queen headliner Big Freedia was (not surprisingly) revealed to be a dressing-room diva who needed the backstage area cleared before entering. Even Hoyston got sissy bounced. Freedia then turned on the sound man, they said, nitpicking to the point where he was allegedly told to leave. The two witnesses could only cringe.

“People don’t care what you sound like,” Spector said. Hoyston agreed that it was unfortunate to “flip-out” on the sound guy. She should know, now that she’s running the sound board at El Rio, and on some nights playing the role of part-time DJ. When I asked if she had a secret-weapon jam in her arsenal that packs ’em on the dance floor, she shook her head and referred to the type of aforementioned top 40 hits. I joked that her moniker should be DJ Malice, since she admits to doing this to sort of torture her audience. (Alas, “Malice” was already taken by a stripper she recalls from her time in the Pacific Northwest.)

For now, we’ll just have to look forward to thrashing about as Hoyston and her band mates entertain us with relentless bass lines, swarms of guitars, and lyrics that alternate between simplistic and complex, delivered with Hoyston’s peculiar intonation.

Speaking of intonation and vocal delivery, I pussy-footed around a bit when it came to addressing what I consider to be Spector’s androgynous voice. I told him that when I first heard Bronze’s “One Night In Mexico” his genderless voice entranced me. He said he gets a lot of comparisons to Nico.

Bronze’s new album features that weird custom-built synthesizer that has caused a lot of fascination at live performances. As a bonus, the designers of the album’s sleeve actually incorporate a thin strip of copper that can be bent in the shape of a ring and worn. It’s pretty slick for rough and charming sounds, a bangle for a future recovered.