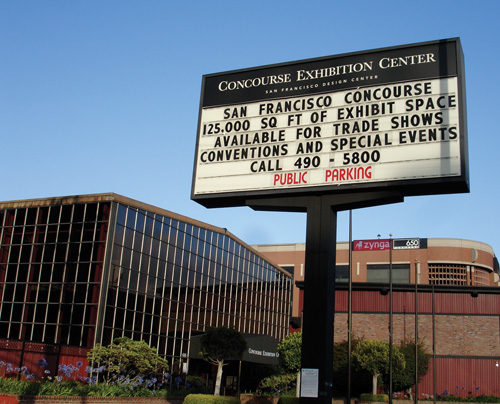 In one of the few remaining San Francisco neighborhoods untouched by gentrification, there is a proposal to demolish the Concourse Exhibition Center and replace the quintessential Showplace Square building with a market-rate residential project, which the developer says will be rental apartments.

This is the first major project in the new Eastern Neighborhoods Plan that will change the light industrial neighborhood where brick and mortar meet interior design, raising questions about whether the development would be sustainable, transit-oriented, and family-friendly.

Home to annual events like the Green Festival and the KPFA Craft Fair, the Concourse is where mom and pop vendors share their wares in an affordable venue — one of the few remaining in the city.

“Since ’96,” recounted Alan Van De Kamp, director of sales for the Green Festival, “they’ve been trying to sell it, to tear it down. You never know from year to year … You imagine at some point, somebody’s gonna say it’s time.”

Though nothing has been approved, the current proposal by developer and Concourse owner Bay West Development, first introduced in 2000, has come the farthest yet. The project will be considered for approval by the Planning Commission once the environmental review process is complete, which could take up to six months. Public comments on the project will be accepted until August 8.

The proposed project contains two sites, one at 801 Brannan Street and one at 1 Henry Adams Street, which would result in a total development of up to 674 residential units, 43,037 square feet of retail space, and 673 parking spaces. Under the city’s inclusionary housing laws, 221 of those units would be affordable (71 to be built on site and 150 dedicated to the city for development). Of the total parking spaces, 166 spaces would replace existing parking spots at the site.

Bay West, developer of the San Francisco Design Center, has owned the Concourse building for 30 years and wants to demolish and rebuild as part of the Eastern Neighborhoods Rezoning and Area Plans, the blueprint for development in a part of the city dominated by working class residents.

That controversial plan was in development for years, during which there was a moratorium on approval of large projects, and it was finally adopted in 2008. It was created to redevelop The Mission, Showplace Square/Potrero Hill, East SoMa, and the Central Waterfront — 7 percent of the city’s 47 square miles — over 20 years.

“It’s our feeling that the building itself is beyond its use as an exhibit hall and we’re replacing it with housing units,” said Sean Murphy, a partner at Bay West.

The Planning Commission heard the draft Environmental Impact Report for the proposal on July 28. At the hearing, the commissioners expressed interest in seeing the progression of the development, but not all were convinced.

“There is a certain amount of vagueness,” said Commissioner Kathrin Moore. “This EIR is ultimately tempered by the strong policy issues that underlie building in the Eastern Neighborhoods and at this moment I don’t quite see that.”

The proposal has left some questions unanswered, such as, where will the small vendors go to sell their wares? Bay West has suggested exhibition halls like the Cow Palace or Moscone Center, but Green Festival organizers say that isn’t realistic for everyone. “We would lose some of our vendors if we went to Moscone,” said Van De Kamp. “There’s some people that can’t come. A lot of the green economy is about mom and pops. They can’t afford it.”

Sue Hestor, a land-use attorney who opposes the development, asked vendors who use the Concourse how important leaving the center would be. “For a lot of people,” she said, “it meant the difference for them being viable or not.”

It would be a major challenge to move, said Robbie Kowal, the co-director of Sea of Dreams, a huge party and concert that will hold its seventh annual celebration this New Years Eve at the Concourse. “There’s the Cow Palace, and the Design Center, but it’s not that big, not a place where you can put a proper concert on one side and a multitude of different kinds of spaces [on the other]. The Sea of Dreams’ success is attributable to the proper use of the Concourse.”

With 125,000 square feet of space that can be split into its west and east halls and a mezzanine, the Concourse building has catered to annual festivals and events for more than 20 years, holding as many as 6,800 people at once.

“There’s room for so many different communities in there. We love our home,” said Kowal. “It’s a really unique and wonderful space.”

The redwood frame of the Concourse, accented by glass fronts that allow for natural lighting, used to be a furniture mart and then a fashion and jewelry mart before it was an event center. The project proposal’s architect, David Baker and Partners, has already designed many of the new buildings in Showplace Square.

Bay West isn’t worried about where the Concourse shows will go. “Most of our shows use less than 20,000 square feet,” said Murphy. “The larger shows would go to the 100,000 square foot San Mateo County Event Center.”

Tony Kelly of the Potrero Boosters Neighborhood Association says the intention of the plan is to reduce the light industrial area by zoning more of it for residential uses, protecting only about half of it and converting the remainder.

“This is an area where we don’t have enough parks, or transit. The project would double the population, and we don’t have enough new infrastructure to handle it,” he said. “It’s essentially a ticking time bomb that the city’s going to have to get a handle on at some point, or these residents are going to be miserable.”

Though the project would create at least an acre of publicly accessible open space, some residents wonder if it’s enough, and the concern about insufficient transit remains.

“It seems to me that once again there is too much parking near a freeway entrance, inadequate transit that is not likely to improve significantly once the Transit Effectiveness Project [a city plan for improving Muni service] is implemented,” said activist Sue Vaughan, who rides her bike at least part way during her commute from the Richmond District to REI at 840 Brannan Street for work.

“This is exactly the kind of place that attracts (commuters),” said Hestor. “There’s too much parking. There’s crappy transit. It totally undermines any idea of sustainable development.”

But at the commission hearing, Commissioner Hisashi Sugaya didn’t think Hestor’s argument had merit. “Parking is not an environmental impact as far as the city is concerned,” he said.

Vaughan says that Muni managers have been absent from several development meetings in the Eastern Neighborhoods area. “No one from Muni was represented on this panel discussion about the Sustainable Communities Strategy,” she said, referring to a July 6 meeting convened by the Planning Department to discuss the importance of building housing next to accessible transit.

The Concourse is scarcely accessible by bus lines 10 and 19, but with a growing population in Showplace Square, it wouldn’t be enough, says Vaughan. “We’re moving forward with all these projects with lots of parking near freeway entrances, which makes it seems like SF is becoming a bedroom community for Silicon Valley. You have an impact on Muni when that happens. With more cars, there’s more congestion for buses.”

Bay West argues that the apartments it plans to build at the Concourse site would be “workforce housing” with less than 1:1 parking (actual parking would work out to .79:1 at the 801 Brannan site and .64:1 at the One Henry Adams site). More than 40 percent of the units would be larger two-bedroom units intended for families.

Yet Kelly says that that by offering the apartments at market rates, none are appropriate for new families. “For all the talk about keeping families here, then how come we’re not building family housing?”

It’s a max-out project, says San Francisco architect Dick Millet, of the Potrero Boosters Neighborhood Association. “In the end, under their breath, they’re all going to say, I wouldn’t live there myself.”