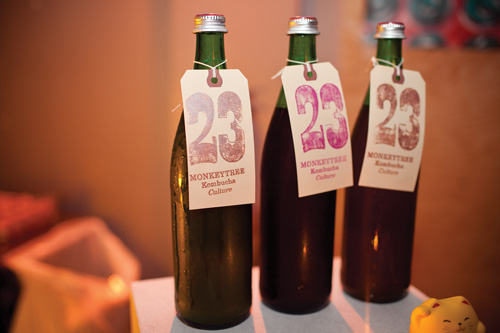 Yet another blow was dealt to the San Francisco’s free-thinking food scene on June 11 when the final Underground Market was staged by ForageSF, at least for the time being. The market was shut down by the San Francisco Department of Public Health (SFDPH) in a clash between small-time food businesses and city officials over permitting and regulatory issues.

“I was ready for this for a while,” ForageSF founder Iso Rabins told us. “I thought someone would show up eventually to say something about this, and now they have.”

Rabins began the Underground Market in 2009 as a monthly venue for food entrepreneurs to share their goods without financial and bureaucratic red tape. It’s basically a farmers market without the permits, fees, and commercial kitchen requirements that add thousands of dollars to the cost of staging an event. Throw in live music, drinks, a little subversive thrill, and you’ve got a gathering that has proven enormously popular.

Until now, the market has operated as a private event. It is held in a private space and attendees are required to sign a membership form and pay a $5 entrance fee. It’s become a huge draw for foodies, with 1,500 to 3,200 patrons per event, according to Rabins, so the state government got wind of its largely unregulated operations.

Alicia Saam, the temporary events coordinator with SFDPH, says her department was asked by state officials to observe the market. It’s now too big to be considered private, she says, so it must adhere to health code and public safety regulations just like any other public event.

“One of the things that differentiate private versus public events is how much advertisement goes out there,” Saam said. “Something that is advertised and has grown big enough to have a following, that becomes a concern for us as a public event.”

Without official oversight, rules are bound to be broken. As with any novice venture, mistakes are made. When officials came to the Underground Market, they saw some vendors acting more like friends at a house party than professional food vendors, which is the complicated line that the market tries to toe.

“We observed operators and vendors eating and then handling the food, and that’s a huge contamination hazard for us,” Saam said. “They weren’t washing their hands before continuing food service, nor did they have a hand-washing set-up right there at their booth. There looked to be temperature issues as far as some of the food that was being stored, such as protein foods, sausages, and dairy. Some foods were not protected but were displayed on the table uncovered. People come up and they’re excited and curious, there’s a lot of creativity there, so they’re hovering over the food and possibly contaminating it with all sorts of things. The source of food, such as the kitchen where the food is coming from, needs to be an approved space where there are no animals, or cats like in some homes. It needs to be a commercial space that is properly cleaned and sanitized.”

According to the U.S. Center for Disease Control, one in six Americans get sick each year from eating contaminated food. Salmonella infection is of particular concern because food can be contaminated anywhere from the fields to kitchen surfaces.

The SFDPH has already allowed the Underground Market to operate unregulated for more than a year without any reported food illnesses, but Rabins is quick to agree that these health concerns are real.

“I do believe that these issues of health are important, and although I feel that all the vendors at the market are very careful about what they make, we do want to institute some Serve-Safe classes, basic food safety,” Rabins says.

He says that on the whole, people cooking small batches pay much more attention to their ingredients and processes than industrial food companies do. Rabin said that while the country’s food safety system works pretty well, it doesn’t allow for much locally based innovation in new models for making and sharing food.

That gets to the meat of the issue: whether and how much the city should get involved in people’s food habits. Where is the line between public restaurants and private homes — and are there ways of creating hybrids of the two? It’s an ongoing battle in San Francisco between regulating restaurants (and netting taxes) while still promoting an innovative food industry that attracts locals and tourists alike.

In the past few years, the mobile food truck craze has hit San Francisco with little bits of foodie culture from all over the world. Entrepreneurs say it’s too difficult and expensive to start a successful restaurant in SF, so they’re trying small-time pop-ups instead.

At first they went unregulated, but now laws define what they can sell, the permits they need, and limit their mobility. Permits are expensive too, starting at $1660 for initial basic coverage, which is why Rabins says the Underground Market provides an additional support for motivated locals. As city officials have closed big budget deficits year after year without any substantial increases in general tax revenue, fees and permit costs have risen substantially in recent years.

According to Rabins, getting the Underground Market up to code means, “getting all the vendors commercial kitchen space, making them get catering licenses, which is around $600, making them pay for vendor event permits, which is $140 per event, and then I would have to buy a sponsor permit which is another $1200 per event plus event insurance plus, plus, plus all these things that would essentially destroy the spirit of the event. It would make the bar way too high.”

Tightening the membership rules is another option, such as making people sign up weeks in advance or requiring member cards. Richard Lee, the director of environmental health regulatory programs at SFPHD, says that regardless of the vendor’s complaints, the regulations must be met.

“We think that these are reasonable options,” Lee said. “Anyone who is going to sell to the public needs to meet certain requirements, and unfortunately some of those requirements are going to be costly. They have to pay for permits and whatever those permits cost they’re going to have to pay.”

Until some agreement can be reached, the Underground Market won’t be operating, and San Franciscans will have to find their fix at the numerous above ground markets and restaurants. Lee says that he hopes that the market meets city demands, and soon, as this kind of entrepreneurial innovation is essential to a thriving food economy.

“We do encourage the micro-enterprises, and there are possible ways to have that started in San Francisco,” Lee said. “It is possible that there may be legislation in the future that might be supported by the Board [of Supervisors] to make it easier for them to get permitted, so there are things that can be done. For us, though, it is food safety and public health that are the most important things.”

But Rabins is already looking far beyond just the small market model.

He also isn’t interested in conforming to the pre-set expectations and sees the motivation behind the market taking it to new heights. In addition to reopening, he says that ForageSF has secured a kitchen space for helping entrepreneurs launch their small businesses and host public classes.

“We are going to hopefully have a rooftop garden with a movie screen, a retail space in front that sells products being made in the kitchen by vendors, and possibly a small-scale brewery in back,” Rabins said.

He is also reaching out to other similar market organizers, such as some in Los Angeles, to brainstorm ways to make this business model more acceptable across the country. He says they are in the initial phases of creating a model that is reproducible for others who want to start their own markets.

Once again, in the place where the organic food movement first bloomed, people are coming together to create new interactions between producers, consumers, and their food.