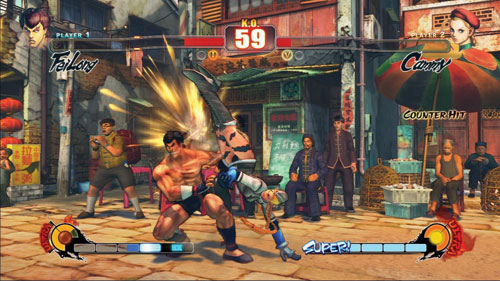 GAMER On a sunny Sunday afternoon in late June, the crush of body-painted, thonged masses surged down Market Street, a trail of gold confetti, empty bottles, and promotional debris in its wake. Downtown was full to bursting with what seemed like everyone in the Bay Area celebrating Pride. But only a few blocks away, a very different scene was unfolding.

South Town Arcade is easy to miss. Tucked into a corner at the mouth of the Stockton Tunnel, its vivid green awning is all that stands out from the other small doorways at the periphery of Union Square. If you’re serious about video game arcades, South Town is a godsend: the cabinets are all sit-down, Japanese “candy cabs” with ultra-precise parts. And there is no shortage of skilled competition.

This particular day, the arcade was a locus of activity. Much like the teeming blocks nearby, South Town was packed with people, although not nearly as uncomfortably. About two dozen men and a handful of women were talking amicably, sketching in notebooks, or glued to a screen in rapt attention.

Every now and then a group of girls in thigh-high fringed moccasins and tie-dye tank tops, or someone in heels without pants, wandered past. It was a little surreal, but no one at South Town seemed to notice. Everyone was too absorbed with Super Street Fighter IV: Arcade Edition (which I was assured is the end-all, be-all of cabinet games these days) tournament that had been underway since noon. When contestants were evenly matched and a good game was in the works, everyone crowded around, enrapt as Hadoukens, as the sounds of two digital characters pummeling each other mixed with the emanations of around a dozen other cabinets and the eight-bit coming over the stereo. The tension was palpable, but you definitely couldn’t hear a pin drop.

There were cheers throughout the matches as someone landed a combo or dodged a sweep, and discussions in between as players and audience members (though basically everyone in the audience was also in the tournament) dissected what went right or wrong. There was a sense of community and camaraderie, something that Simon Truong, who runs the arcade along with Arturo Angulo and Cameron Berkenpas, points out is at the very heart of South Town.

“We wanted to build a community. Playing online is fine, but it’s totally different when you can actually see your opponent. You could, you know, talk shit if you want,” he said, laughing. “But mostly, the people who play in our arcade, if they lose, they talk. They figure out, how can I beat you with the same moves? They give each other tips — so basically everybody can up their level of play and represent San Francisco and Northern California. We need better players out here to represent the area.”

It seems to be working. With little or no advertising, South Town Arcade has seen the number of customers balloon in the six weeks since it opened. Some players sit down when the doors open and only leave when they close for the night, six to nine hours later. As I sat feeding my tip money into Metal Slug between tourney matches — the coin slot basically a vacuum at first, but less so as an hour of play began to hone my meager skills — I could only imagine what that amount of time playing Street Fighter IV could do for your game.

Watching Pavo Miskic, a lanky San Mateo resident, shoot his hand across the buttons before a match, it became clear to me that practice helps. But until South Town opened, the only places in the Bay Area for Miskic to get his hours in were limited to Golflands in Sunnyvale and Milpitas, and to the student centers at San Francisco and San Jose State universities. “San Francisco hasn’t really had that much of a scene for [Street Fighter IV],” Miskic says. “[South Town] is gonna help. Until then everyone was playing mostly in the San Jose area.”

After braving Pride parade traffic and finally making it to South Town, Miskic emerged six hours later as tournament champion, despite arriving late and taking a default loss. As he stepped outside to speak with me, a girl handed him a congratulatory portrait she had drawn of Balrog, his character of choice in the day’s matches. Inside, even though the tournament was over, no one seemed ready to leave. A small circle began gathering around the Street Fighter II cabinet.

“I’ll add that I’m really bad at this game,” Miskic said. “I consider myself terrible. That’s the thing that I like about it, though. Because there’s always a constant challenge between the old-school people and the new-school people coming up, once you’re around the community for long enough, people will get used to you. You’ll make friends in it. People will help each other out.”