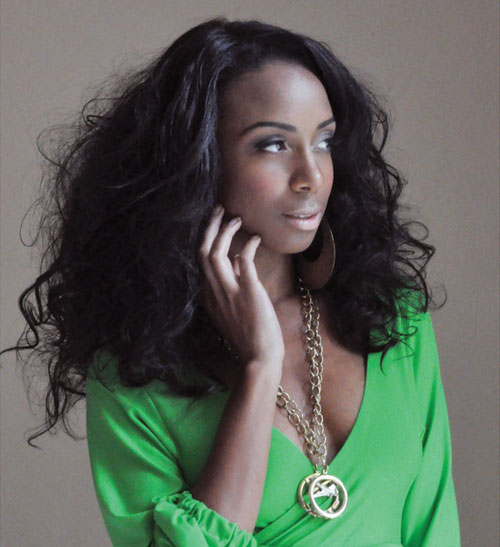 BEAUTY Miss City by the Bay wants one thing to be clear: the Miss California USA 2012 competition is not about clogging, trained pigeons, or sparkly pink batons. Erika Ari Alexandra will be among those representing San Francisco in this year’s pageant, but she doesn’t need to break out any vaudeville to routine compete. “Special talents are for Miss America pageants. In Miss USA, our community service is our special talent,” Alexandra says.

The 23-year old Vallejo woman also insists that the competition isn’t just about looks. “It’s not just a physical thing,” she says. “It’s about celebrating all the aspects of beauty — looking at our minds and our hearts and our souls.”

At 5 feet, 11 inches and 128 pounds, with flowing locks that complement her svelte frame, this catwalk queen isn’t challenging any conventional notions of what looks good. Although this is the first time she’ll compete, she’s had pageants on her mind since she was young.

“I always saw myself as someone who would be able to use my talent on a larger scale. When I was little, I watched [pageants] on TV and thought ‘I could do that,'” the San Francisco State University communications major and aspiring model says.

Alexandra explains that her goal is to gain notoriety and use it as a platform to inspire inner-city youth. She has volunteered for the Mayor’s Youth Employment and Education Program and currently works with the Bayview YMCA as a youth and adult tutor. For Alexandra, role-modeling and model-modeling go hand in hand: she hopes the competition will give her the opportunity to “develop a real voice and support what I care about.”

If this all sounds like it’s toeing the pageant line, it could be worth noting that the Miss USA organization itself — which is owned by Donald Trump and includes the state titles as well as Miss Universe — doesn’t specify charity as a prerequisite for donning heels and walking down the runway. Women are rated in just three categories: evening gown, a three-minute personal interview, and of course — swimsuit.

Between now and November’s competition, Miss California USA contestants will spend their time fundraising, courting sponsors, and campaigning. According to the organization’s website, the goal is to make enough money to cover the $1,700 entry fee — money that recruiter Erik DeSando says covers production costs for the organization. Contestants also solicit sponsors for additional goods and services such as tanning, hair, makeup, manicures — even ball gowns.

Though the organization encourages this type of fundraising, it’s technically not required of entrants, and no part of the competition regulates how contestants handle money they do raise. They’re equally free to pay out of pocket, or pocket extra donations.

Which means that any contestant who uses her affiliation with Miss USA to save the whales, rather than paint her nails, has gone beyond her pageant-related duties.

Although there’s no paperwork to prove it, the consensus is that plenty of contestants secure sponsors who not only fund sparkly bikinis but a bevy of charitable causes. Some women even choose to compete under titles like Miss Muscular Dystrophy or Miss California Innocence Project to raise awareness for these causes. Most Miss California competitors, like Alexandra, claim a title based on a city, county, or landmark.

One might well ask: if contestants truly care about the causes liberally sprinkled over their resumes, why don’t they dispense with the pageantry and dedicate themselves to saving the rainforest or promoting animal welfare?

Erik DeSando, who counsels contestants from California to New York City, says that his competitors have used the pageant not only to raise thousands of dollars, but to effectively create a “personal brand” with clout.

“They increase their value enormously by associating with us,” DeSando says. He emphasizes from the beginning that “his girls” probably won’t win and that they should focus on goals besides the crown.

By marketing themselves with the Miss USA brand, contestants are able to create huge community followings well before November’s three-day event. Campaigning doesn’t help contestants directly: their supporters can’t vote or influence the judges’ decisions in any way. But Alexandra says fundraising in the community creates momentum for important causes. “It’s a way to get people involved, to get people excited and talking,” she says.

“We’re involved in creating something that’s big and bold, something that says ‘this person’s special,'<0x2009>” DeSando explains. Of course, he points out that contestants are usually the “right type of girl” to begin with.

In his book, that’s a girl who is “five-fingered”: loving, caring, giving, nonjudgmental, and — the thumb — beautiful. “I couldn’t believe the quality of female I was dealing with,” he says, describing his first day at Miss USA. “I thought the competition was just a bunch of hotties trying to be hottest. But these were real wife-quality girls, which is about the highest compliment there is, coming from a guy.”

Indeed, potential “wife-liness” is big with Miss USA. Contestants must be between 18 and 27; must never have been married, given birth, or been a parent; and must remain single during their reign.

Those of you waiting for a competition to judge “husband-quality” men may be out of luck. In DeSando’s words there’s no Mr. USA pageant because, well, “I just don’t think men like to be told what’s wrong with them.”

And should you be of the steadfast belief that beauty pageants are Neolithic rituals promoting airheads who eat nothing, you will be vindicated to know that DeSando makes no bones about promoting physical beauty.

“Studies are coming out all the time that emphasize the importance of attractiveness,” he says. “Attractive people have a 25 percent added value over average-looking people.”

For comparison, DeSando claims, an Ivy League education creates only an 8 percent to 10 percent added value. So to enhance salaries, job productivity — and, yes, the ability to raise money for a charity — it might be better to just go ahead and enhance yourself first.

“I think most people in America should care more about their looks. Most of them could try harder,” DeSando says. “Participating in Miss USA teaches that. I want my girls to come in as Arrowhead water and leave as Fiji water. It’s the same water, but it costs $3 more per bottle.”

If DeSando’s unabashed endorsement of eyebrow-plucking (not to mention plastic-encased H2O) has you cringing, it may be heartening to know that not all the women he advises see things in the same light.

“If you’re selfish, if you only care about yourself, it will affect how you look on the outside no matter what,” Alexandra says, explaining that hard work, inspiration, and commitment really can translate to physical beauty. “If you see someone who’s glowing from the inside, it makes them something unique.”

Which, Alexandra says, may make all the difference.

Support Miss City by the Bay at www.facebook.com/ErikaforMissCA.