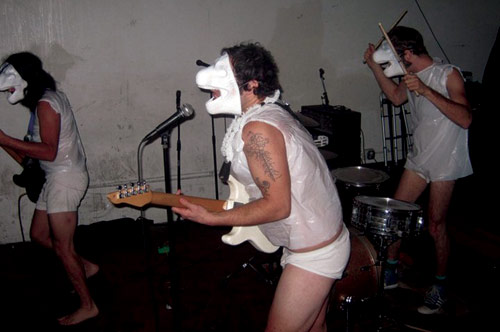 SOUND TO SPARE “What show are you here for?” asked what looked like a curious 10-year-old as I took care of business at the urinal. “I’m here to see Uzi Rash,” I answered matter-of-factly. But I wasn’t so sure he was curious about the bands by the way he stared at what makes it the men’s room. Apparently Oakland’s the New Parish (www.thenewparish.com) took the phrase “all ages show” to heart.

After that somewhat disturbing run-in, I settled into the bar excited for a night of firsts. It would be my first time at the venue, as well as my first time seeing openers Terry Malts. They were fine, but like I told the tiny Peeping Tom, I wanted to check out the East Bay’s Uzi Rash (www.myspace.com/uzirash). I hadn’t seen them since they did a memorable night of Monks’ covers on Halloween, where their performance included theatrical embellishments like shaved monk-like heads and makeshift robes.

This night’s scene was different. The onset of a rare heat wave was kicking in while the murky, cave-wave sounds of the mutable band — these days, a seven-piece stage outfit — took charge with a commanding and cacophonous presence. The Rash seems to be sitting on a backlog of sludgy, lo-fi treasure: current LP Palmwine Rumpus Vol. 2 (Party Ngg! Records) precedes a September release on Volar Records titled I Was 30 in 2012. Next month the band plans to start recording another full-length album, Whyte Rash Time — not a play on “white trash,” but a reference to the Monks’ Black Monk Time — which will hopefully see the light of day before the year’s end and they embark on a West Coast tour.

I caught up with Max Nordlie, the band’s toenail-painted, jorts-wearing guitarist and vocalist. He gave me a peek into his philosophy on degeneration and premonitions. (With song titles like “Bag of Dirt” and “I’m a Trashbag,” it’s tempting to see Uzi Rash as emblematic of the self-deprecating sounds I often notice oozing out of Oakland.)

Nordlie directly references 2012 as the year of the band’s apocalyptic demise, and explains how the Rash players were “born grown” four years ago. “The band sound was much more the same of itself than it could possibly be now,” Nordlie says cryptically, going on to cite a permanent need for regression. I hear that yearning for regression in the music — at times it reminds me of an unpolished version of Devo’s de-evolution.

That night, the ensemble’s delivery of what Nordlie calls “beach party squelch and shimmy” included electro-sax, keys, and cool-looking guitars. The band looked sort of like a low-budget version of Sly and the Family Stone: keyboardist Thee Whyte Bitch in her long white wig hammering out some discord and bassist Mateo Luv looking svelte in his long johns.

Their performance is raw and charged, and while the front man looks as if he’s working out some serious emotion, Nordlie assures me that he’s aiming at “getting it right” in an expressive sense — he just wants a playfully spirited “twist-and-shout-up.”

I asked Nordlie if the constant revolving door of musicians in the band dizzies him. “Stability, much like ability, is overrated,” he replied. “We seek to compensate for the traditional rock spectacle of ritual with monstrous unpredictability — even to ourselves,” he said, before quipping that the forthcoming Volar record is simultaneously “sophisticated and appalling.” That sounds like a great introduction to 2012, end times or no.

There will be a few more local opportunities to catch Uzi Rash this summer — most notably the 1-2-3-4 Go! Records 10-year anniversary show July 22 at Oakland Metro Operahouse (www.oaklandmetro.org) — before it goes on tour with Unnatural Helpers.