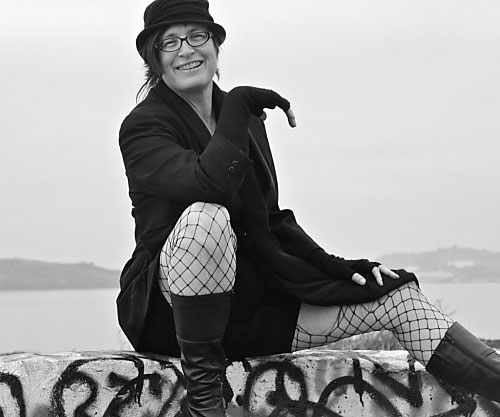 QUEER Heady, hilarious, heartbreaking: Big Sex Little Death explores legendary sex writer, educator, and instigator Susie Bright’s coming of age from the 1960s to the present. Bright’s memoir focuses on her involvement with The Red Tide, a radical high school newspaper in Los Angeles in the 1970s, and her subsequent membership in a socialist sect that sends her halfway across the country. Her union organizing stint lasts until the Party leadership expels her for “joining or leading a cult of personality.” Personality is certainly one of Bright’s strong points, so perhaps we should be grateful for this particular falling out. It eventually leads to Bright’s role in founding the first lesbian porn magazine, On Our Backs, in San Francisco in 1981, as well as her pioneering work as a fiery spokesperson for free speech and sexual liberation. I spoke with her over the phone about sex and memory and writing.

SFBG You do such a great job of talking about your sexual coming of age as a teenager: describing your sluttiness without shame, your curiosity about bodies and pleasure and the intricacies of sexual positioning.

Susie Bright I think it’s because I wrote my memoir like a storyteller, like a poet — not a polemicist. I wasn’t ashamed; it never occurred to me. Margaret Mead would have found my little teenage tribe to be quite poignant.

SFBG There’s a tendency for many sex-positive spokespeople to glamorize even the most annoying, mundane, or gross sexual experiences as somehow — well — positive. Sometimes this sex-positive rhetoric ends up making those of us who don’t always succeed at having a wonderful sex life feel like failures …

SB It was more than that. The whole mainstream feminist movement was calling for our heads. Or, as Barbara Grier of Naiad Press put it, “Everyone I know thinks y’all should be assassinated.”

It’s been a part of every civil rights and social justice movement that I’ve been a part of. We know it — we talk about how the powers that be would prefer to let the weak fight among themselves. We see how divide-and-conquer tactics are so effective, but it’s very hard to resist.

What kills me is the blindness, even years after the fact. Sometimes it’s comical. I got a letter from an ambitious writer the other day who told me that in the ’80s she fought the sex-positive On Our Backs types tooth and nail, no tactic too dirty. “We” were pimping the patriarchy and she was on point to take us down. She asked me if I found it amusing that she’s now in a submissive relationship with a man — no! Then she asked me if I would blurb her new book.

Someone asked me on this tour if I ever got an apology, and I was startled. No, not for the bombings or the death threats or the bannings or the locked doors or the bizarre libels and slanders. No way.

SFBG When the feminist movement refused to support you, you found several surprising allies. Among them were John Preston, at the time the editor of the gay leather magazine Drummer; cult filmmaker Russ Meyer of Faster Pussycat fame; and even the Mitchell brothers of that legendary exploitative straight strip club on O’Farrell Street.

SB Well, those were strange bedfellows, eh? They were all mavericks, iconoclasts, outlaws, film buffs, and we shared that in common. Aside from public librarians and ACLU lead attorneys, these guys were probably the most eloquent defenders of the First Amendment you ever met.

SFBG On Our Backs was started by two strippers who worked at various clubs in the Tenderloin and North Beach. One of the most heartbreaking chapters in Big Sex Little Death is where you show us how so many strippers worked to support their lovers financially, male and female, and then ended up strung out on drugs, homeless, or dead after their lovers used and abused them.

SB “Legalize it,” as Peter Tosh said. That is why these tragedies happen — because sex work is criminalized.

SFBG In your preface, you say, “I’m more preoccupied with people dying than with people coming.” And so of course you want to prevent these unnecessary deaths. Toward the end of the book, you also mention the deaths of friends, lovers, and confidantes to AIDS — but only briefly. It’s as if it’s still too painful to talk about.

SB The main deaths I talk about are my parents’, where I could fit more of the puzzle together; then John Preston, as a small example of what went on in early ’80s plague life; and the dykes I first knew at On Our Backs, some of who died too young. I am angry and too ragged to write about it all yet — I don’t have the distance from it. The last memorial I attended this past fall was [for] one of my greatest inspirations, a total ball-of-fire who ate a Fentanyl patch, choked to death on her vomit, and left a suicide note.

It was the exact one-year anniversary of the death of her father, a Southern fundamentalist preacher who beat and raped her as a child. She left him at 15 to come to California and made her way as one of the first generation of out dyke strippers and punk rockers. My redheaded friend was a leader of a local NA chapter by the time she was 20. What happened to her, all these years later, breaks the heart of everyone who knew her. She was a wonderful, wonderful, caring, radical feminist creative dyke who wanted to be a superhero who would vanquish all the abusers. It’s not fair.

SFBG Fairness is one of the central issues of the book — who lives and who dies, which cultures disappear and which remain. At the end of the book, you talk about deciding to give birth to a child, Aretha, and raising her. I’ll admit I got a bit worried that you would suddenly talk about this trajectory in a way that erased your sexual and political history, the histories of people like the friend you just mentioned.

SB My daughter has a trajectory of her own, now!

SFBG But somehow you’re able to talk about your love for Aretha while making it clear that child rearing certainly isn’t for everyone, and still articulating an anti-assimilationist queer world view focused on sexual liberation and radical politics.

SFBG Why do you think gay assimilationists emphasize marriage, military inclusion, and child-rearing as the only choices for respectable queers, narrowing the options for everyone and rejecting sexual liberation as something dangerous from the past?

SB They’re squares — what can I say? They’ve always been around. Square used to be a synonym for straight. We’re constantly caught in the middle on this, the boho bunch. Of course we want civil rights for all, duh. I defend anyone’s right to let the state be their pimp, to fight the wars, be the cannon fodder, acquire family assets like a stamp-collecting hobby. Bully for you. But as Peggy Lee said, “Is that all there is?” Christ, I hope not.

Mattilda Bernstein Sycamore (mattildabernsteinsycamore.com) is most recently the author of So Many Ways to Sleep Badly.