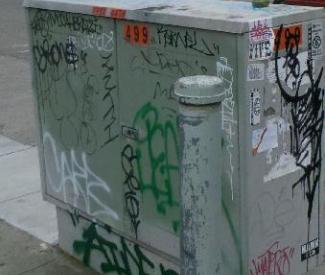 By the League of Pissed Off Voters

More than 60 people showed up on the steps of City Hall May 21 to demand that AT&T engage in the same old basic planning process that even small-scale businesses have to go through.  (Read: even little people without expensive corporate lobbyists.)

Neighborhood organizations, disabled and senior representatives and environmentalists all pushed the supervisors to make the sensible vote at tomorrow’s full board meeting: support a full Environmental Impact Review of the consequences of 726 giant metal lockboxes cluttering up our public sidewalks.  As Julian Davis, a longtime community activist put it: “Why would you plunk down 726 giant Buicks all over the city when you have a perfectly good underground high speed rail?”

True that.  San Francisco currently has miles of fiber optic cable pulsing beneath our city streets, and even that is already becoming outdated.  So now AT&T’s brilliant idea is to litter our sidewalks with what amounts to giant crusty supercomputers? And what happens when they’re obsolete?  Basically, taxpayers just got stuck with a bunch of metal junk on our sidewalks, while AT&T expanded its profit margins.

Why do small cafes have to pay hundreds of dollars in permit fees to put two piddly tables outside their shops, while AT&T gets a blanket “categorical exemption” for almost no money to nail down ugly boxes that will block the sidewalk and attract graffiti?  (Hmm, we can probably think of some choice graffiti actually…)

The last time we heard from the folks at AT&T, they were helping the NSA wiretap our private calls from a secret room in their headquarters, so excuse us if we’re a little hesitant about giving the company a free pass to put creepy lock boxes in front of our homes.

According to the Department of Public Works at the last public hearing on this issue, DPW staffers are relying on AT&T’s “expert analysis” to guide them on whether or not AT&T should receive a categorical exemption – in other words, DPW is relying on AT&T to do its job, and the community just got cut out of the process.  An independent EIR is necessary to address these blatant conflicts of interest.

Speaking of conflicted interests: The latest scuttlebutt inside City Hall has some progressive supervisors desperately looking to cut a deal to save face in the midst of election season.  And what would that deal look like?  Cutting the number of boxes and giving neighborhoods an opportunity to decide whether they want 4’x4’x7′ lock boxs on their blocks.

So, basically, if your block doesn’t have a home owner association advocating on your behalf, guess what you’re going to be walking around everyday?  As Juan Monsanto of San Francisco Beautiful pointed out, most of these boxes will be installed in less affluent communities without strong representation at City Hall.   AT&T’s sweetheart deal gives the supervisors cover to punt their responsibility to administer public space safely and equitably.

So, to recap: we are now officially a city that will arrest human beings for sitting or lying in the middle of the sidewalk, but the board is working overtime to try and figure out how to exempt AT&T from city oversight process so it can stick giant immovable metal boxes in our right of way?

Oh, it’s okay because they’re going in the Bayview. Or in a neighborhood that already has a bunch of blight, so what’s a little more?  Lame.  Call your supervisor today and tell him or her to get a backbone.  It’s tough being the swing vote, you know?  Help ’em out, let ’em know you’re watching – and voting.

The San Francisco League of Pissed-Off Voters is the local chapter of the League of Young Voters, a national organization that engages young people in the political process, organizes around progressive issues and takes it beyond just “get out the vote.”