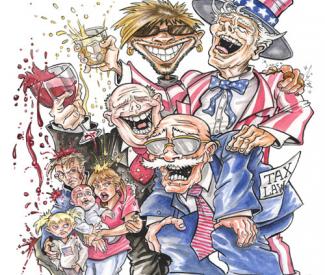 The Board of Supervisors today approved legislation by Sup. Ross Mirkarimi that exempts some large technology companies from having to pay the city’s payroll tax on stock options after rejecting an attempt by conservative supervisors to delay consideration of the measure until it can be debated along with Sup. Mark Farrell’s far broader tax break proposal.
The tax break proposals grew out of the legislative debate in March about exempting Twitter and other companies that create jobs in the Tenderloin and mid-Market areas from paying the payroll tax on new hires, particularly after City Economist Ted Egan said the tax on stock options was the most compelling reason to believe Twitter, which plans to go public in coming years, would follow through on its threat to leave San Francisco.
Zynga, Yelp, and other tech companies took the opportunity to also threaten to leave if they didn’t get a tax break. Mirkarimi (who voted against the Twitter legislation, along with Sups. David Campos and John Avalos, all of whom called it a troubling precedent) then proposed legislation to exempt stock options, as did Sup. Mark Farrell, a venture capitalist who works with companies that would benefit from such tax breaks.
But while Mirkarimi’s legislation only exempts stock options valued at more than $750,000 and is aimed at just the half-dozen or so San Francisco companies that plan large initial public stock offerings in the coming years, Farrell seeks to exempt all stock-based compensation from city business taxes, which could involve hundreds of companies. His legislation, which was introduced later than Mirkarimi’s, is still awaiting a final report from the city’s Office of Economic Analysis.
Farrell criticized Mirkarimi’s legislation as a “half-measure” that didn’t “comprehensively deal with” cutting business taxes, inexplicably warning that it would be “very, very dangerous” to approve Mirkarimi’s measure before his. “I absolutely believe we should be considering them together,” Farrell said.
Fellow conservative (and former schoolmate) Sup. Sean Elsbernd supported Farrell’s call for a delay, telling his colleagues, “There’s no practical impact to delaying this for four weeks.” But Mirkarimi said his measure has been studied, has minimal General Fund impacts, was supported by the Small Business Commission, and is a drastically different proposal than Farrell’s broad tax giveaway. “They are night and day,” Mirkarimi said, noting that his was narrowly tailored to address a specific problem of retaining the largest tech companies, while Farrell’s would affect “well over 200 companies.”
The motion to continue the legislation was defeated on a 4-6 vote, with Sups. Farrell, Elsbernd, Carmen Chu, and Malia Cohen supporting the continuance and Sup. David Campos absent. A motion to pass Mirkarimi’s legislation was then approved 7-3, with Cohen joining its supporters.