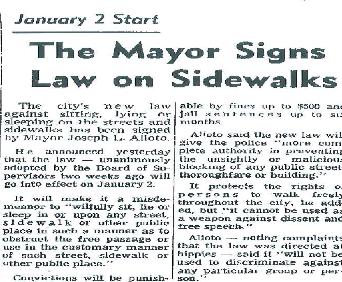 Is sit-lie a case of not learning from our mistakes?

An interesting bit of history that for the most part failed to enter the debate over the ordinance is that San Francisco enacted a similar ban on sitting and lying  in public spaces in the late 1960’s (PDF).

Inspired 40 years later by the same neighborhood, the current sit-lie law is a legislative throwback. Back then, Haight Street was a center of controversy as hippies began to arrive in droves – hanging out, singing, dancing and generally occupying the sidewalks. Some business and property owners were apprehensive over the rapid changes to the neighborhood.

The Board of Supervisor enacted the ordinance, which made it a crime to “willfully sit, lie or sleep in or upon any street, sidewalk or other public place,” with a unanimous vote in 1968. Violation carried a fine of up to $500 and a maximum jail sentence of six months.

Then-Mayor Joseph L. Alioto, who signed the ban into law, told the San Francisco Chronicle the ordinance “will not be used to discriminate against any group or person.” His promise echoes the claims of contemporary proponents of sit-lie.

But police used the law to target not only hippies but also gay men in the Castro. The predictable reality of selective enforcement galvanized popular resistance.

Over the next decade, the ACLU sued and managed to overturn parts of the law. “[The original laws] were being used unjustly by the police against people who were considered undesirable,” said Alan Schlosser, legal director of the ACLU, who has been working for the organization since 1976. They were used against Hippies in the Haight, they were used in the Castro and the Tenderloin against the prostitutes.”

Political pressure from a wide coalition, which included Harvey Milk, convinced the board to rescind the ordinance in 1979. In fact, one of Milk’s signature campaign issues was stopping police harassment of gay people.

The current law does avoid some of the pitfalls of the old one. The ban only applies to sitting and lying down; the sixties-era law referred to the obstruction of public space. Police are now required to issue a warning, and the punishment for violation is significantly lower. Neither distinction, however, alters the fundamental problem of sit-lie.

The ordinance criminalizes an extremely common behavior, which is in itself harmless. The most vulnerable members of our society depend on public space and are inevitably the most susceptible to getting in trouble into the crosshairs sit-lie enforcement.

Queer activists are once again leading the effort against unfair and unwise regulation of public space. We reported April 11th that self-proclaimed “angry queers” installed handmade benches on city streets as a form of protest art. Likewise, this upcoming May 22nd, which is Milk’s birthday, Queers for Economic Equality Now (QUEEN) will be coordinating sidewalk events against sit-lie in San Francisco and Berkeley.

Tommi Avicolli Mecca who organizes with QUEEN, said “for me it is so thrilling to see two cities doing something against sit-lie and invoking Harvey’s name.”