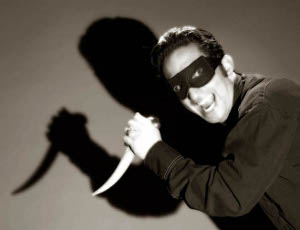 In conjunction with the continuing “Fantomas by the Bay” series presented by City Lights, the Cultural Services of the Consulate General of France, and the Mechanics’ Institute Library, here’s an interview with the Slow Poisoner, who may be casting a musical shadow over the Fri./8 event, “An Elegant Threat.” The man also known as Andrew Goldfarb holds forth on his Fantomas bonds, surrealist activity in San Francisco, and the Slow Poisoner’s current and next moves.

SFBG What is your interest in Fantomas, and do you have any favorite Fantomas-related works?
Andrew Goldfarb I first discovered French villain Fantomas during an absinthe binge abroad, and was immediately drawn to his unrepentant sinisterism and stylish fashion sense, especially the black mask and top hat combination. I would say that aside from the original 1911 literary serial, my favorite Fantomas work is the 1915 film series, because there’s nothing that captures the decadence of criminal Paris like a hand-cranked silent movie tinted with blood.

SFBG You’re a native San Franciscan. Do you feel there is surrealist activity present here at the moment, and if so, what are its facets?
AG As long as San Francisco is coated with a thick coat of fog in the morning, the City will remain mysterious, and surrealistic activity will be present. I’d say my favorite examples of modern surrealism in S.F., aside from the schizophrenic rants posted on telephone poles in the Tenderloin, are the costumed noise bands that flourish in the Mission District, such as the Spider Compass Good Crime Band, which features two oversized vultures, one of whom plays lounge music on an organ while the other generates electronic dissonance with analog synthesizers. Very entertaining, and feathered.

SFBG What is the Slow Poisoner up to these days?
AG I just completed a roots-rock-opera about ghosts and liquor, which is titled Lost Hills. It tells of my days as a traveling curio salesman, my brief engagement to a phantom hitchhiker, and my eventual hanging (after some misfortunes involving a tainted Mint Julep). I’ve been illustrating it with felt art, kindergarten-style. I’ve also just brewed up a new batch of my Slow Poisoner Miracle Tonic, which is made with pure Egyptian oil and is proven effective in the treatment of Consumption, Women’s Troubles, Gout, Neuralgia, Wandering Limbs, Stoutness, Onanism, Disinterested Bladder, Elephantiasis, Cholera, Barnacles and Boils, The Fits, Excessive Abscesses, Necrosis, Lavender Fever and General Wasting.