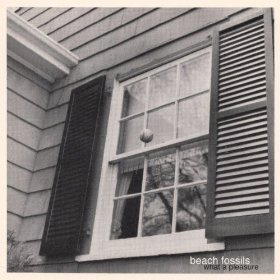 Beach Fossils’ music possesses a brisk energy that — while sonically akin to great ’80s records on labels such as Postcard and Sarah — feels contemporary, or at least youthful. The group lost a guitarist after its debut album last year, yet its guitar sound remains its strong point: the jangly melodicism of this eight-song EP’s title track is early Johnny Marr-caliber, and the harmonic momentum of “Fall Right In” results in maybe the best Beach Fossils track to date, a declaration of affection that’s winning in its simplicity.

After “Out in the Way,” a plainly lovely rendering of abandonment that includes an instrumental contribution from Wild Nothing’s Jack Tatum, the latter half of What a Pleasure strays into darker terrain, exploring melancholy and, as the title of the last song puts it, adversity. The sighing, rolling pattern of the EP’s instrumental opener creeps into the conclusion of “Adversity,” bringing a suggestive a hint of nostalgia as well as hypnotic suggestion (is it time to start all over again from track one?) to the song’s languor. There’s an urge to look backward while moving forward through life, and it suits the band’s sound.

Beach Fossils, “Out in the Way”: