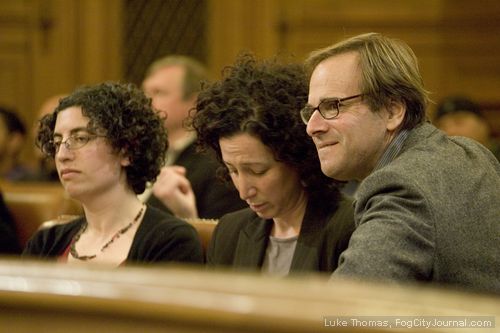 A few weeks ago, when the Guardian was the only media outlet in San Francisco that seemed to care about the huge Twitter/Mid-Market/Tenderloin tax exclusion zone – which everyone took as a done deal because it was sponsored by Sups. David Chiu and Jane Kim and backed by fiscal conservatives – I had a very illuminating interview with City Economist Ted Egan.

We at the Guardian were instinctively opposed to huge tax breaks for a wealthy corporation and big landlords and our position only became stronger as I reviewed thousands of pages of internal city emails and other public documents and got a sense of the sleazy and haphazard way this was created, and with the unsupported claims being used to sell it.

But then, when I asked Egan what convinced him that Twitter would leave without a tax break, he said the tax on stock options was what convinced him. If media reports were right and Twitter goes public for $12 billion and employees got about a quarter of that, that would translate into about a $40 million one-time tax bill. And that, Egan said, would probably convince most companies to flee.

It made sense to me and the other editors here at the Guardian, so our position evolved and our coverage focused on the rest of the tax giveaway, which Egan told us and the Board of Supervisors Budget & Finance Subcommittee – in two separate hearings – really didn’t make much economic sense. SEIU Local 1021 and other progressive opponents of the legislation also softened their opposition and acknowledged that some kind of change to the stock option taxation was probably needed.

Today, as Sups. Chiu, Ross Mirkarimi, and Mark Farrell all introduced varying forms of legislative fixes to the stock option issue — and the media coverage of the issue begins to pick up steam – what’s somehow being lost in the renewed debate is how ridiculously corrupt and wasteful the city’s initial approach to the Twitter problem was.

“One is a sleazy land grab and the other is honestly trying to deal with tax policy,” says Gabriel Haaland of SEIU 1021, which opposes the Tenderloin/Mid-Market deal but is open to legislation tweaking the payroll tax’s stock options provisions.

Yet, unbelievably, many city officials are talking about approving the massive tax giveaway zone on April 5 and then continuing to give even more tax breaks to Zynga, Yelp, and any other high-tech companies that threaten to leave. Rather than stepping back to reevaluate the whole thing (as Farrell, to his credit, seems to be advocating in his comments to the press), most the officials involved in this seem to be bent on simply giving in to what corporations say they want and asking for almost nothing in return.

As I report in this week’s Guardian, continuing my earlier investigation, there are serious unanswered questions and hints of corruption in the way many Tenderloin and Mid-Market properties were offered tax breaks, largely at the direction of private power broker Randy Shaw, yet proponents of the measure have plowed forward with the deal anyway, denying reasonable requests for a public review of what the city is getting in the deal, for reasons nobody can explain.

During a high-stakes election year, when many of these deal makers will be seeking campaign contributions from the very interests that would benefit most of this reckless and ill-considered giveaway of public funds, it would behoove us all to take a deep breath, get the facts, get off our knees, regain a sense of civic pride, and have our toughest negotiators get the best deal we can with these companies.

And those negotiators probably aren’t from the Office of Economic and Workforce Development, which cut a bad deal with corporate America on the America’s Cup (another story on which the Guardian was a loud and early whistle-blower) and a bad deal on Twitter, largely because this agency exists almost entirely to serve the business community and not city residents. Personally, I’d love to see Egan and Budget Analyst Harvey Rose as the city’s negotiating team, two straight shooters who don’t have a political pony in the race.

There is a reasonable solution to this problem here somewhere, and it isn’t simply about slashing the taxes for every big corporation that wants it, or with simply waiving payroll taxes on stock options, a provision the board created in 2004 to address the problem of companies using inflated stock options to get around their payroll taxes. Mirkarimi’s legislation includes a floor of at least $100,000 in salary per employees that companies would still be taxed on when they go public, which seems like a good idea. Farrell has suggested finding a way to value stock options as compensation at the time employees buy them, which also sounds reasonable to us – even though we’re a progressive publication and he’s arguably the board’s most conservative member.

You see, reasonable solutions are possible. But that has to start with abandoning the ill-conceived, badly executed Mid-Market/Tenderloin tax exclusion zone – which Egan has said won’t achieve its desired goals anyway – and dealing solely with the issue of business taxes and retention.

Then, on a separate track and with a more transparent process, the city can also deal with revitalizing Mid-Market and the Tenderloin using smart, creative, multi-pronged strategies – some of which may still involve incentives to Twitter and other desirable companies – that don’t rely on voodoo economics and wishful fantasies that seem to mask darker ulterior motives.