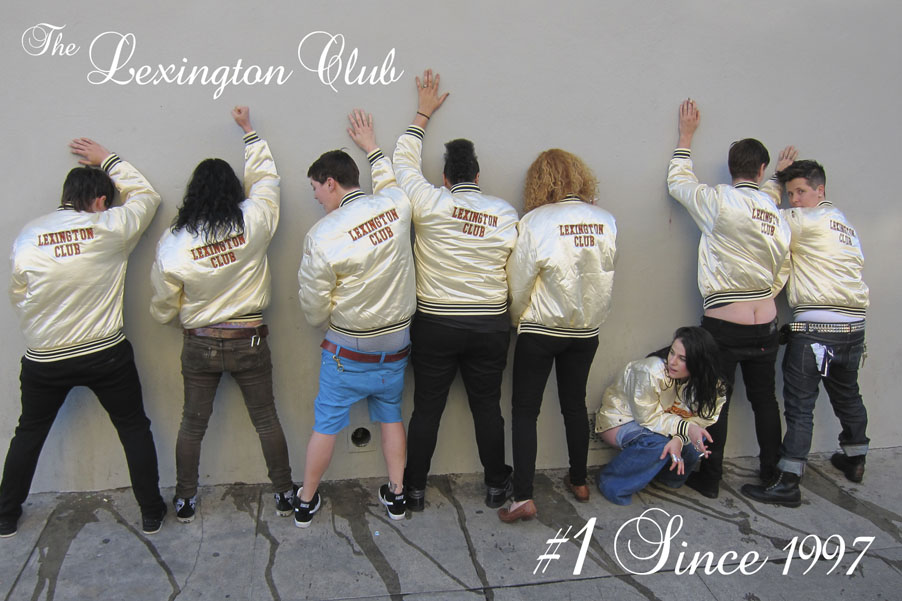 Gosh and begorrah, I know you’re hungovah — from all that St. Paddy’s Day grog or whatever. Don’t worry, you’ll feel better by Saturday, just in time to celebrate the Lexington Club‘s 14th anniversary, huzzah! Unfamiliar with this rowdy party dyke landmark? Hot chicks, get hip real quick at this blowout, featuring DJs Jenna Riot and Miss Pop, sexy-sexy dancers, no cover, and of course stiff drinks.

After the jump, a Super Ego clubs column from 2007 devoted to the Lex’s 10th anniversary (which was the perfect antidote to the L Word phenomenon of the time), giving you a wee bit o’ lesbian history.

SUPER EGO Lesbians: is there nothing they can’t do? They can run a contemporary art gallery in thigh-baring Versace, tossing back their Paul Labrecqued locks as they leap from their roofless 330Ci. They can go from homeless crack addict to nude Hugo Boss model without gaining a single ounce. They can be a smokin’-hot Latina named Papi, a sassy, brassy canoodler who just happens — surprise! — to be a whiz at hoops. Astonishing lesbians!

Oh, wait. That’s The L Word — about as far from the real world of gloriously rambunctious, wild San Francisco dykes as you can get without scarfing down a gift sack of MAC Pervette lip frost, doing Pilates to Ashlee Simpson (“I am me!”), and microwaving Cheeto, your stump-tailed calico cat. Yes, yes, I know the writhing isle of televised lesbos that L makes LA out to be is one big, fat, easy, anorexic target. Don’t get your Mary Green panties in a bunch, Caitlyn. Just lie back, relax, and think of Joan Jett and Carmen Electra. It’s OK. But just as Chuck D. once bemoaned the fact that most of his heroes don’t appear on no stamps, so my homo heroes don’t appear on no Showtime.

Case in point: Lila Thirkield, the superhumanly vivacious owner of SF sapphic outpost the Lexington Club. When I first moved here in the early ’90s, I almost turned straight or something. The San Francisco my naive dreams envisioned was full of hot, scruffy, tattooed boys into hip-hop and punk, all of them on goofy, gleaming bicycles, occasionally in drag. What I got were mostly overgymed proto–circuit queens in pink spandex thongs and cracked-out twinks you could practically see through. Great if I needed to floss, but … And while all the cute ex–ACT UPers were somewhere adrift — busy shearing sleeves off flannels, maybe — it was the rough-and-tumble sistas who really dotted the t’s on my fanboy résumé. Dykes ruled it.

That was back when wallet chains were radical and FTMs were the new It girls. I’m dating myself, but who wouldn’t, hello? Alas, despite all those Sister Sledge–soundtracked strides up the rainbow of equal signs, women could still get kicked out of bars for making out. Wha? It was a gay man, man, man’s world, and the few lesbian watering holes hewed strictly to the old-school standards: alternadykes, calm down.

Thirkield, a spiky-souled kid at the time, stepped up and opened the Lexington in 1997 to give dykes of a different stripe a dive of their own. Like all bars clever enough to fill a cultural gap, the Lex galvanized its community and reinforced the new, boisterous lesbo aesthetic that combined street activism, machismo appropriation, punk rock attitude, and a winking yen for girly pop culture. And hot sex, of course.

“It seemed so important to have a space where we could be creative, where artists, street kids, and young people could hook up and express themselves,” Thirkield says. “It was my first time running a bar, but it was like the whole community was running it with me.”

Over the past decade the Lex has persevered in the same spirit. “The economics of the city have really changed,” Thirkield says. “Our crowd has a really hard time living here now — that’s why we never charge a cover and we always support other things going on. But really, we’re doing better than ever.”

The young drinking dyke crowd has also expanded, finding homes over the years in such spaces as the Phone Booth and Pop’s, as well as legendary joints such as Sadie’s Flying Elephant and the Wild Side West. New bar Stray is catering to a mostly female clientele, and, although lesbian spaces Cherry and the old Transfer have succumbed, a slew of roving dyke dance parties have taken root.

“The dyke scene has changed in the past 10 years too,” Thirkield says. “It’s more diverse. Certain aspects of it are more visible in the media — some people expect different things. We get a lot more complaints from people coming in for the first time, saying things like ‘It’s such a dive!’ Well, yes, that’s exactly what it is. I mean, it’s great that lipstick types exist. I hope they find a place that makes them happy. But if you want to flick your lighter and sing along to old Journey songs with a roomful of babes from around the world — like during Pride last year — this is the place.”

And what about that pesky L Word? “We get a big crowd to watch it on Sunday nights — mostly because they can’t afford cable. Then they stay for an hour afterward, drinking and bitching about it. So it’s great for business!”