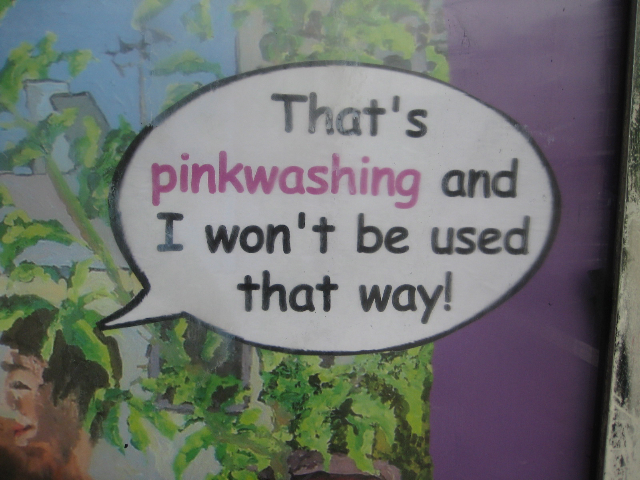 Queer Palestinian activists are on tour in the Bay Area speaking about queer struggles in the context of the Israeli occupation of Palestinian lands. (Tonight is your last chance to catch the three representatives of the organizations Aswat and Al Qaws as they relate their stories, 7-9pm at the Pro Arts Gallery, 150 Frank Ogawa Plaza, Oakl. Facebook info here.)

Last night they spoke at Mission High School in an event organized by the Arab Resource and Organizing Center and co-sponsored by a diverse coalition of groups. Most asked be be identified by their first names only, fearing discrimination for the sexual orientation and reprisals for speaking out. Here are some highlights

“The Palestinian queer movement has managed to combine queer, feminism, and resistance to occupation into one integrated struggle,” said Haneen, who is active with Al Qaws, which promotes the development and growth of the Palestinian LGBTQ community. “When you talk queer rights in Palestine you cannot overlook the fact that Palestinians live under occupation. It is important not to overlook.”

One reason for the tour is to highlight what the activists call the “pinkwashing” of the Israeli occupation. “It’s a term that means the abuse of the Israeli gay struggle by the Israeli government,” said the 23-year-old activist, Sami. “Wrap a pink scarf around your eyes, we should not criticized Israel because it’s gay friendly. It’s part of the whole campaign of branding Israel as gay friendly and democratic and make people not see the human right violations.”

Moderated Cherríe Moraga, a queer Chicana activist and writer, the event was a rare exchange between two generations of queers of color. “I, as a Chicana, do not feel estranged from the Palestinian question, she said. “There is no contradiction for struggling for nation and for struggling for the freedom of our desires and sexuality.”

The three younger activists in turn showed appreciation for all they have learned from the veteran movements in the United States. “We learned a lot from the queer of color movements here in the United States when we were exploring the intersections of the struggle, [your writings] were amazing, [they] helped us,” Sami said. I would like to thank you for that.”

Despite their reference to other movements, they said everything from their rhetoric to their political strategy is based on communication with queer Palestinians. “The process of choosing the strategy is important,” said Abeer, who works toward inclusion of queer women in civil society.  We went out to the field we met queer Palestinians. We developed all these news strategies on our feet. This is the spirit of Al Qaws—bringing these field experiences.”

The nascent movement they represent has already produced some concrete results. Before they began, the Arabic terms for gay were negative but now even the mainstream media has adopted some of the reclaimed and positive terminology of the movement.

If you cannot make it to the event, the after party will take place at 9:30 at the Paradiso Lounge, 2272 Telegraph Ave, Oakl.