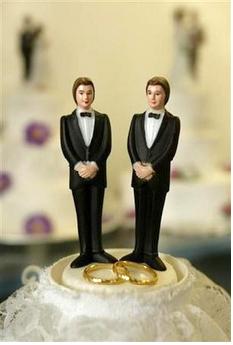 One of the most interesting elements in this case is the possibility that the legality of same-sex marriage in California may hinge on whether a deputy clerk in Imperial County has the right to represent the people of California in a legal appeal. See, the governor and the attorney general usually defend state laws when they’re challenged in court, but in this case, both Arnold Schwarzenegger and Jerry Brown declined. In essence, they both said they thought Judge Vaugh Walker’s decision overturning Prop. 8 was just fine.

So the supporters of Prop. 8 have to make the case they have legal “standing” to appeal — and the judges seemed more than a little dubious about that. The political group that backed Prop. 8 was in trouble from the start, and couldn’t really demonstrate what legal authority it had to handle the appeal. The deputy clerk from Imperial County, which has a population of 166,000, argued through her lawyer that she would have to sign marriage certificates, and that Prop. 8 directly affects her job. That didn’t get very far, either. And if the appeals court tosses the case on the standing issue, nothing else matters. Walker’s ruling is affirmed and same-sex marriage is legal in California.

Then to the meat of the case. Judge Hawkins instantly asked Charles Cooper, attorney for the Prop. 8 proponents, if the voters of the state of California could legally amend the state Constitution to re-segregate the public schools. Cooper: No. The point was pretty clear: The voters have the right to amend the Constitution, but not in a way that violates fundamental rights.

Cooper went on with what rapidly devolved into lunacy, eg: “When a relationship between a man and a woman becomes sexual, society has a profound interest.” In other words, a man and a woman have sex; they might conceive a child, who might be born “out of wedlock” and raised by a single parent, which would be a bad thing. Judge Reinhardt: That’s a good argument for prohibiting divorce — but isn’t really on point here.

Theodore Olson, representing the plaintiffs, pretty much knocked it out of the park in his first few minutes, noting that California has effectively engineered discrimination into the Constitution by eliminating a right that the U.S. Supreme Court has said repeatedly (14 times, according to Olson) is fundamental. He pointed out that in Lawrence v. Texas, which overturned the sodomy laws, the U.S. Supremes determined that sexual conduct between consenting adults of any gender is protected. So how, he asked, can you take away marriage rights because of a Constitutionally protected activity?

Since the Prop. 8-ers have argued that same-sex marriage would force children to have “a premature interest in sexual activity,” Olson suggested that the court would have to “ban comic books, video games and conversations with other children.”

The judges, as is typical, interrupted all the lawyers to ask questions — until Theresa Stewart stood up, representing the San Francisco City Attorney’s Office. She was sharp, quick on her feet, perfectly prepared — and for most of her short presentation, the judges simply listened. Her point: When it comes to children, family law in California treats same-sex couples and opposite-sex couples precisely and exactly the same; why should marriage be any different?

In the end, what I saw was three judges struggling not with the outcome of the case — Walker’s decision seems likely to be upheld — but with how broad they want the final decision to be. Based on the questioning at the end, it seemed as if they’d rather uphold Walker’s ruling without making a sweeping statement that gay marriage is Constitutionally protected and must be the law of the land everywhere in the United States.

But unless they try to duck the real issues and rule only on standing, that’s going to be a stretch. Any honest, logical ruling can only come to one conclusion — that treating lesbians and gay men differently than straight people violates the Equal Protection provisions of the U.S. Constitution. And if the Supreme Court agrees, it will be the end of gay marriage bans, the end of Don’t Ask, Don’t Tell and the beginning of a new era in America.

UPDATE (thanks to Nichole Dial for research);

Lots of news media coverage on the some good, some lame. The Prop. 8 Trial Tracker website had some of the best breaking stuff. The Mercury News did a live blog by Howard Mintz that was full of details. SF Weekly covered the more amusing accounts such as the crowd outside the court room.  The Bay Citizen also had a live blog and analysis.

Brian at Calitics had one of the best quick analyses and the Chron’s Bob Egelko came out with a really fast story that touches on the major themes of the case.

The AP postings on the Huffington Post covered the highlights as well as an overview of the background of prop 8. The New York Times used the same article, then later added a short, fairly superficial piece by Jesse McKinley  (what, the Times had no live blogger on this?)