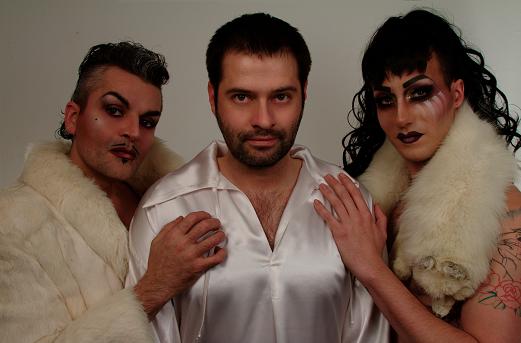 Right out of the glitter-strewn gate, when it launched a year ago, I knew that Some Thing was “special.” The weekly Friday drag night (with crafts table!) at the Stud not only filled the city’s missing weekly alternative drag hole left behind by Trannyshack, but it managed to bring something unique, channeling a new sensibility rising in the children that respected traditional performance as well as punk-rock theatrics, and loved to play with the expectations that had arisen around both. The club, headed by VivvyAnne ForeverMore, Glamamore, and DJ Downey, grew out of their ambitiously arty Monday weekly Tiara Sensation, also at the Stud. The threesome — who emanate a intellectual grace as well as a healthy appreciation of improvisatory surrealism and wry humor — have made Some Thing not just the Friday night home base for altqueers, but also a showcase of the diversity of queer dance music styles, with ear-opening DJs guesting every week.

It’s time for the annual, incredibly creative Miss Tiara Sensation Pageant, Sun/5, and the popular Some Thing crew is moving it from the Stud to Temple to accomodate their larger dreams for the contest. (You can read the particulars in my Super Ego column this week). This year, the pageant will be a star-studded fundraiser for awesome local fringe theater The Offcenter.  I spoke with philosophy-clad cyber-showgirl Vivvy about Some Thing’s anniversary, the big Tiara to-do, and some of her favorite glamour looks.

SFBG How does it feel for Some Thing to be one year old? How has the club evolved and changed over the past 12 months? Surely it’s grueling to put on a weekly party. But to put one on with two big drag shows every night, eek. Aren’t you exhausted?

VivvyAnne ForeverMore While the club known as SOME THING is one year old we have been working together for 3 years on Tiara Sensation and other projects. The club has gotten bigger over the past 12 months, and we’ve expanded our family of performers. Also our audience, while it’s changing and growing constantly, has gotten to a really lovely point, there is comraderie. We are all there for each other. The craft table has gotten even more ambitious than in the past. Folks go nuts for it, [crafts leader] Hot Gloo often runs out of supplies before the show even begins. We’ve also gotten to pull in great DJs from SF and abroad, and increased our DJs so now we have two residents Stanley Frank and Juanita MORE!

Also, we’ve made connections with other parties around town, and promoters. Which strengthens the nightlife, and the fringe culture of San Francisco generally. Which is very important to us. We love San Francisco and the creative weird people that land here. We want the nightlife to be vibrant, whether you are at our party or somewhere else. Throwing this party is like having a big fat happy baby, it takes alot of work (fun work) but we love it and it loves us back.

SFBG One of the things I admire most about Some Thing is your willingness to embrace the abstract in terms of theme. You always utilize the phrase Some Thing — like on 9/11 your theme was “If You See Some Thing Say Some Thing” and the themes can always be interpreted a number of ways (although sometimes, hilariously, you make it extremely narrow, like Some Roisin Thing — all Roisin Murphy songs — or other divas I can’t remember at the moment). But I love how you treat the whole theme notion ironically. How do you come up with the ideas?

VVFM Our themes come from anywhere and everywhere often they arise when the three of us are joking around and playing. We know a theme is a good idea if we laugh a lot about it.  It’s a collaboration of our weird senses of humor and quirks. People constantly suggest themes to us. We find that if there is a way to misunderstand the assignment a theme can work on many levels, and the show will be suprising. For instance Some Thing Like it Hot could be a lot of different things. For VivvyAnne it was a Marilyn Monroe night, for others it was about spiciness or sexiness, or the beach.

SFBG Why are you going rather upscale with the pageant and having it at Temple? It seems like a big change in a way — are there other changes or ambitious projects coming?

VVFM While Temple is upscale-r than the Stud it is a matter of logistics. We want to produce a large scale event and provide a platform for our performers to really shine for a big audience. There’s a thing that happens when a performer hears 700 folks cheering for them, it’s trans-formative. The Stud is our home, but it couldn’t fit the crowd that we want to draw.

We aren’t leaving our weekly show behind, just augmenting it. For us its not about upscale or downscale, we just wanna have fun and take our family on a big ride. Temple made sense to us because we’ve known [events manager] David Peterson for years, so we are keeping it in the family.

As you know we do SOME ARE CAMP, our summertime weekend in Guerneville, and we will continue with that. We have some designs on international travel and other trips as well. SOME THING can and should be everywhere. Most immediately coming up at the Stud, we have SOME THING NEW, New Year’s Eve with Juanita MORE! and our anniversary on January 14th.

SFBG Run down one of your favorite looks of the year for me.

VVFM Our favorite looks on ourselves are:

Monistat — a unicorn for Halloween
Beff Amphetamine — as a Turkey stage diving
Martha T. Lipton — dressed as popcorn by taping white balloons to herself.
Suppositori Spelling — as a rich woman with plastic surgery by gluing her upper lip open to look like surgery gone awry.
Alotta Boutte — Spinning a huge skirt around, so big in fact that it kept hitting the walls.

But our whole family is so beautiful!