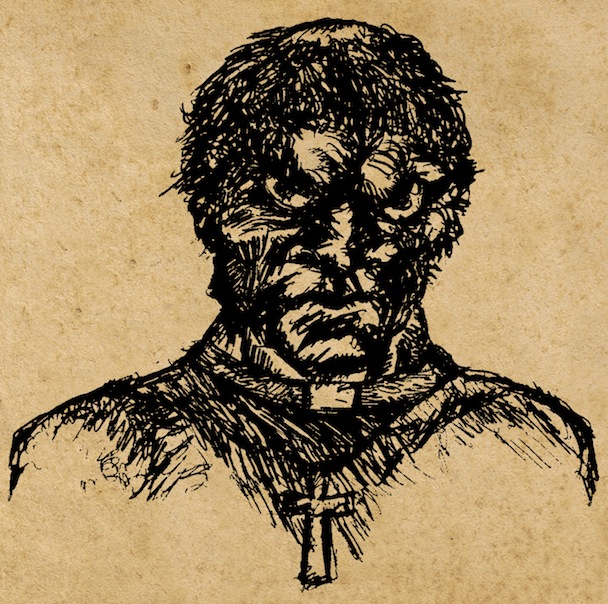 All good heavy metal strives to challenge the listener, pushing buttons and boundaries. Some of its most successful incarnations make people downright uncomfortable, achieving escalating extremes of tempo, tuning, and tone.

Slough Feg is one of San Francisco’s most unique underground bands, an honorific that stems directly from its unique approach to the challenge of challenging. Eschewing thrash’s BPM arms race, death metal’s knuckle-dragging celebration of “brutality,” and black metal’s dissonant, low-fi navel-gazing, the quartet (now two decades or, if you prefer, five drummers old) manages to discomfit with an unlikely tool: melody. New album The Animal Spirits was released Tues/26 on Profound Lore Records.

Bursting with major-scale chord changes, Celtic-folk influences, and vocal lines that make the tautological adjective “sing-song” suddenly useful, the band’s music is resolutely unlike anything you’ve ever heard before. Some of the heavy metal staples are present – the acrobatic drumming and soaring, dual-guitar harmonies, for example – but that’s where the easy descriptions end.

The Animal Spirits‘ song titles evince an ecclesiastical theme, which is made immediately apparent in the music – album-opener “Trick the Vicar” rampages through two minutes of triplet-driven NWOBHM wordplay, all of it pertaining to clergy. “Out of the frying pan/into the Friar” is but one of many examples.

Though the lyrics are a bewildering mix of the high- and lowbrow, a strand of gleeful silliness is apparent throughout, even when Slough Feg tackles weighty historical subjects like Martin Luther (“The 95 Theses”), alchemy (“Materia Prima”), or trans-pacific feats of seamanship (“Kon-Tiki”). The Alan Parsons Project cover (“The Tell-Tale Heart”), conversely, is defiantly straight-faced. Closer “Tactical Air War” features a guest appearance by Bob Wright, vocalist in cult local metal band Brocas Helm.

No matter how frenzied the music around him becomes, drummer Harry Cantwell never seems to tire, and his versatility is a crucial complement to the band’s idiosyncratic arrangements. Bassist Adrian Maestas excels at the genre’s distinctive low-end gallop, though his forays up the fretboard are also a valuable addition to the sound. Guitarist Angelo Tringali is laden with responsibility, forming one half of the harmonic partnership that lies at the heart of the band’s music.

The complementary half is provided by guitarist-singer Mike Scalzi, who founded the band in his native Pennsylvania. Scalzi’s vaudevillian vocal delivery and incomparable songwriting approach are the defining elements of Slough Feg, and it is his desire to alienate people through melody that makes the band sound the way it does. A charismatic iconoclast, Scalzi has lately begun contributing to metal blog Invisible Oranges, promulgating his strong opinions with the help of a prose style he honed at his day job: teaching community college philosophy courses.

Check back in this space soon for an extensive interview with Scalzi, one of the few people in the world who can discuss Saint Vitus B-sides and use the word “ontology” correctly in a sentence, though, it must be said, not simultaneously.