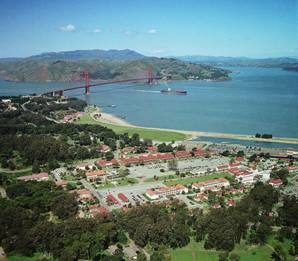 In San Francisco’s Presidio, one of the few national parks that is mandated to pay for its operations with the proceeds from development, historic preservation is often undermined by commercial concerns. And critics contend the proposal for a big new hotel at the Main Post is a prime example of that model’s shortcomings.

The Presidio Trust, a seven-member board that presides over the historically significant park, is considering a proposal by the Larkspur Hotel Group to build an 88,000-square-foot luxury hotel complex of 12 new buildings and another two current and historic buildings that would be remodeled as part of the project. Opponents say the project runs counter to the Trust’s mandate of protecting the historical and environmental character of the Presidio’s Main Post.

Originally, the Trust set out a management plan that allows for only minor construction projects at the Main Post, but the body is now seeking to amend the plan to include the massive new hotel development. When it announced its plans at a recent public meeting, it was met with overwhelming opposition from neighborhood and local preservation groups

Gary Widman, president of the Presidio Historical Association, sees the move to amend the plan as emblematic of the Trust’s refusal to work collaboratively with the community. “People are frustrated by what they see as the Trust trying to put this amendment into place in a ‘stealth’ move. The Trust is not holding hearings explicitly on its proposed amendments,” he said.

Widman was also concerned with the impact that the hotel and the changes to the Presidio would have on the environment, calling the changes “consumptive, anti-sustainable and not in line with them claiming to be a green organization.”

Another opponent of the plans for the hotel is Boyd de Larios, a representative of Descendants of the Anza and Portola Expeditions (DAPE), who expressed concerns about local heritage being lost forever if the trust went ahead with its plans.

“Presidio doesn’t need a hotel. People aren’t looking for another Coney Island,” he said. “They do some wonderful things but no one trusts the trust anymore.”

After the base closure in 1994, the Trust was set up to make the park self sustainable by 2013 through the use of real estate leasing and renovations to the post buildings to make the park more desirable for the private sector. Among the projects added to the park in recent years is the Walt Disney Family Museum.

Trust officials did not responded to repeated Guardian calls for comment on the issue and any additional future plans. Similarly, others have been unable to get the answers they are searching for from the trust. One community member, Richard Hanlin has been questioning the future of the Presidio for years but has still not found answers to his questions. Hanlon said he worries about the Presidio’s future.

“As it stands [the Trust] is in a very weak position,” Hanlin said, focusing on the ability of the trust to maintain and protect its valuable assets. Hanlin went on to predict the barracks buildings will be ensconced by fences and without any renovations by the end of 2013 when the federal subsidies of the Trust runs out. The lack of renovation and preservation of the old barracks buildings are particularly troubling to Hanlon, especially since they represent the roots of the Presidio as a strategically important military installation.