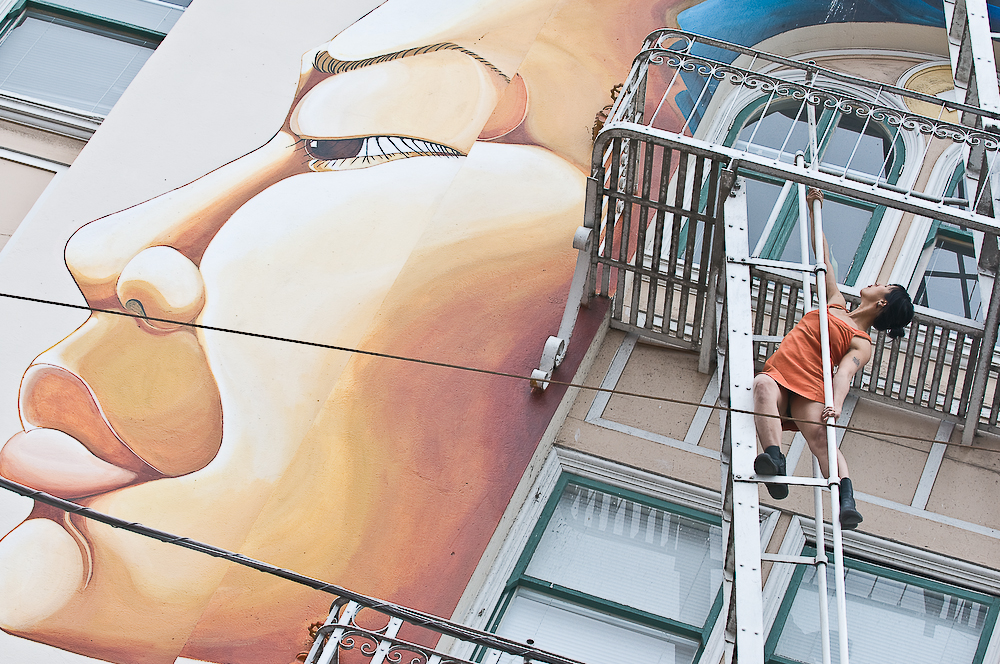 Recently I’ve been volunteering with an older blind woman. During our last volunteer session I mentioned I was attending Flyaway Productions’ Singing Praises: Centennial Dances for The Women’s Building (Sept. 10-18) and asked if she had heard of The Woman’s Building. She practically laughed out loud, and I was surprised to learn she was very familiar with it as an active member of the second-wave feminist movement during the ’70s and ’80s. She described the struggle against sexual and gender inequality in the workplace, in the family, and in reproductive rights.

That night as I stared at the brilliantly lit murals of The Women’s Building with aerial dance artists scaling the walls and windows, I thought again of my blind friend’s activism and pondered what it meant to be a woman watching this particular dance performance. So many of the values I cherish about being a woman were present in the bold women flying above.

These women were strong. While dance requires a certain amount of brawn in itself, aerial dance requires much more abdominal and upper body strength than in most dance forms. This may seem self-evident, but in the context of the piece it was particularly telling that these were women with musculature. These women took risks. Hanging suspended over asphalt by a harness requires a certain amount of fearlessness. The risks inherent in this type of dance lent to the thrill audiences felt as dancers swung upside down or sideways high above the ground. These women challenged each other. Much of Jo Kreiter’s choreography consisted in the dancers pushing and pulling at one another, not as antagonists, but as competitors, driving each other to new physical heights. And finally, these women were intuitive. Dance in unison is difficult. Three women, each positioned on a different flight of stairs on the fire escape, danced in tandem though they could hardly see each other. Rather, they had to feel one another’s energy, a feat that takes sensitivity and practice to perfect.

Aside from the lovely testament to women inherent in the dancing, I also enjoyed how unassumingly the performance garnered an audience. Passersby stopped and looked up in wonder. Cars slowed. Buses full of people crammed to look out the window and see what was going on. The performance ran about one half hour in length and by the end quite a crowd had accrued. This rapt community of onlookers, some there by chance and others by premeditation, were yet another demonstration of the role The Women’s Building plays in bringing people together.

Nearing the end of the performance, a dancer stood on the corner of the colorful four story building, her body illuminated in white light, her clothing and hair billowing frantically in the wind. She looked seven feet tall and practically biblical in effect.  Looking around, I noticed the now sizeable crowd, their faces upturned towards the Amazonian woman atop the poignantly muraled walls, a veritable bastion of womanhood in the sky.