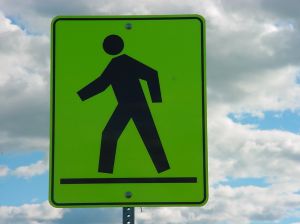 With the help of Stampe, who spent eight years as communications director for the Greenbelt Alliance, Walk SF plans to improve overall street safety and increase pedestrian activity throughout the City. However, with Stampe’s plans to make San Francisco “the most walkable city in America,” there also comes a fair share of speed bumps to take into consideration. For one thing, the desire to keep all pedestrians in a large metropolis safe is about as simple as keeping Tiger Woods celibate — the issue may never be completely resolved.

Walk SF, although welcomes Stampe with whole heartedness, will need to step up their game funding-wise now that they have officially gone pro. “We’re looking for all of the funding we can find right now,” Stampe said. “Especially right now funding is not a sure thing”

Getting San Franciscans walking instead of driving may be an arduous task, but it is a task Stampe is ready to take on. She said organizing and promoting street events is “a way of showing that we can use streets in a different way,” other than solely attempting to exterminate the notion of an unsafe road. “That’s something we really want to build here.”

Walk SF’s number one goal is to safeguard pedestrians and make walking fun again. However even though walking provides fabulous oxygen circulation as well as exercise, being a pedestrian can sometimes become a high risk activity. In a report released in 2009 by Transportation for America, studies showed that 27 percent of all traffic deaths in the San Francisco region —which includes Oakland and Fremont — were pedestrians.

The study also reported that there were 72 pedestrian fatalities in the SF region in 2008, which rose from 64 in 2007. Transportation for America also refers to potentially hazardous roads as “dangerous by design roadways,” which Stampe describes as any type of road that encourages fast driving.

“Pedestrians also have the right to speak up for safety,” Stampe said. “There are [dangerous by design roadways] in San Francisco, where there’s very little to influence cars to slow down.”

While San Francisco’s hilly streets make for a thrilling car ride, the amount of pedestrian-vehicle collisions that take place in this city alone are enough to shoot down any race car driver dreams of careening down Nob Hill.

Stampe mentioned well-known streets such as 19th Avenue, Masonic Avenue, and Monterey Boulevard as some of the most prominent dangerous by design roadways, listing several priorities in promoting pedestrianism.

“The first thing is for there to be more equity in how funding is distributed,” Stampe said. “Right now much more money goes towards funding for cars than sidewalks.”

A way in which this may soon change can be found in Proposition AA, which is on the ballot for this November’s elections. Walk SF Board President Manish Champsee explained how Prop AA will help strengthen sidewalk safety and promote more walking.

“It is a vehicle registration fee, projected to bring about $5 million a year,” Champsee said. “It costs $10 every time you register your car.”

If passed, 50 percent of Prop AA funding will go to road resurfacing, 25 percent will go towards transit reliability improvements, and another 25 percent for pedestrian safety. Champsee tells us about what his organization calls “walkability,” which makes places inviting to walk through and deflects local street crime.

“There should be active ground floor uses,” Champsee said. “At street level,you should have retail, eyes on the street.”

After traveling the world, Stampe feels inspired by street culture abroad and hopes to bring that same environment to San Francisco. She explained that in places like India and other Asian countries, “what you realize is that people are paying much more attention there,” regardless of the J-walking cows and street vendors blocking the road.

Champsee’s street-life inspiration lies in bicycle communities like Amsterdam and sidewalk café culture in Paris. Community events such as Sunday Streets, in which San Francisco city streets are temporarily closed and completely open to pedestrians, are what members of Walk SF hope to see more of.

Walk SF’s own event, Peak to Peak, will take place Oct. 16, and hundreds of walkers will make the trek from one side of the city to the other. “There are 10 different peaks,” Chamsee said. “You see parts of the city that not many have seen before.”

From advocating the reduction of car use to asserting local speed limits, Walk SF clearly has a lot in store for our city. And when asked if we can expect anything like Bay to Breakers from Peak to Peak, Stampe replied, “Probably, but with fewer naked people.”