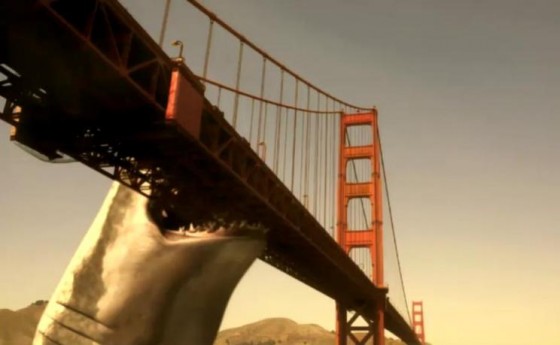 The fine art of creating shitty movies can be divided into two camps — intentional and unintentional. And while I have to admit, I’m much more a fan of the latter (Troll 2, The Room and the Blair Witch sequel all come to mind), I really love what the folks at the Asylum are up to. Any film studio with the balls to release a movie called Titanic II (“Looks like history is repeating itself”) is just fine in my book.

Based out of Burbank, CA, the Asylum produces truly awful rip-offs of major Hollywood blockbusters, which they’ve dubbed “mockbusters.” These straight-to-video travesties are hastily thrown together (the studio makes a movie a month) with a mix of embarrassing CGI, surreal casting decisions (Debbie Gibson, the scientist!) and insulting plots. They’re then promptly thrown into stores to coincide with the theatrical releases of the films they’re capitalizing on. Transformers becomes Transmorphers. I Am Legend turns into I Am Omega. And Snakes on a Plane is now Snakes on a Train (a spoof of a spoof — so meta!) But here’s the thing. These films are supposed to be bad and the guys calling the shots wouldn’t have it any other way. In fact, they think it’s hilarious.

“There’s a part of me that thinks that anyone who walks into a store, sees Transmorphers on the shelf and thinks that it’s the Michael Bay film on the same day that it’s entered into the theater, to a certain extent deserves to be fooled,” said Asylum partner, Paul Bales during this YouTube interview.

The self-awareness the studio employs in making these films and the fact that a lot of the audience is in on the joke leads to some opportunities to push the limits of what defines a bad movie. Sure, a lot of films have wooden acting, grade-school level writing and hilarious plot holes. But do they have a giant shark leaping out of the water and attacking a plane at full elevation, like in Mega-Shark vs. Giant Octopus? Nope. They don’t.

I also love how much the Asylum seems to revel in its shamelessness. You called your movie, Indiana Jones and the Kingdom of the Crystal Skull? Well, ours is called Allan Quatermain and the Temple of Skulls. Deal with it.

Really though, there’s something wonderful about consciously creating trash. Especially in the world of film, where we’ve grown accustomed to movies being synonymous with insane budgets, top-notch special effects, and elaborate scores. To turn that all on its head and make something terrible in the interest of just allowing people to laugh and be entertained is pretty awesome.

And to the sourpusses who find this all to be offensive or harmful to the Hollywood system, Asylum partner David Rimawi has offered up this advice: “If you want this to stop, you’ve gotta stop watching these movies.” Love ‘em or hate ‘em, that’s going to be easier said than done.