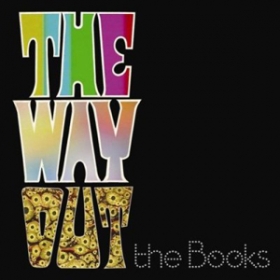 THE BOOKS
The Way Out
(Temporary Residence)

During the far too long half-decade wait between albums, it became easy to wonder if maybe Nick Zammuto and Paul de Jong, together known as The Books, had lost some of their creative juices. Luckily, one listen to The Way Out proves the wait was well worth it. If anything, this is an album so meticulously thought out and crafted that the two years (they officialy began recording in 2008) it took to create makes complete sense. It’s clear now that it wasn’t a lack of ideas, but rather a surplus of them to work through that caused the delay. And the final product, 15 tracks spread over nearly 55 minutes, is some of the finest work of their career.

For those uninitiated, The Books create a sort of cut-and-paste mix of cello, guitar, found sounds, male and female vocals and manipulated samples. The seamless blend of acoustic, electric and plain bizarre elements is unlike anything you’ve ever heard before, yet somehow instantly accessible. And at the core, underneath all the technical prowess and headphone trickery, lies the two things that separate The Books from their peers—a sense of humor and an ability to conjure up a broad range of emotions through their use of samples. Both are wonderfully intact on The Way Out.
Drawing inspiration this time around from self-help and hypnotherapy tapes, The Way Out is full of samples of new age mantras and cheesy therapists. Opener “Group Autogenics I” floats along on a base of sparse guitar and piano plunks while hypnosis instructions snake in and out. At one point a man says, “You may just possibly detect from my voice that I am Irish. And now, I leap forward in time.” As the last line is delivered, his voice echoes off into the distance and a tacky sci-fi whirl pops up. It’s small moments like this throughout that serve as the nudge and the wink to remind you that The Books aren’t taking any of this too seriously, and neither should you.
One of several highlights comes early on in the form of “A Cold Freezin’ Night.” The story goes that Zammuto and de Jong found an old Talkboy (the Walkman/tape recorder used by Macaulay Culkin in Home Alone 2) at a thrift store with a tape still inside. The content of the tape was a hilariously twisted conversation between what seems to be an older brother and his little sister. The frantic, quick pulse of music The Books created for it meshes perfectly while never drawing too much attention away from the strange source material. “I could kill you with a rifle, a shotgun, any way I want to,” the brother taunts. “Probably by cutting your toes off and working my way up. Towards your brain!” His sister replies with a defeated, “I wish I was a boy.”

Elsewhere, “I Didn’t Know That” is a lively piece of Books’ style slice-and-dice funk and a reminder that these guys can craft awesome grooves. Tracks like “Beautiful People” and “Free Translator” prove that Zammuto has harnessed his limited vocal range to impact the lyric-driven songs in a positive manner, which is something he struggled to do on 2005’s Lost and Safe.
But what makes The Books distinct in a genre that can often seem cold or detached is their respect for — and ability to extract emotional elements from — samples. Take the recorded announcement of a pregnancy at a group dinner followed by celebratory applause on “All Our Base are Belong to Them” from their 2002 debut Thought For Food. Or the Japan Airlines flight attendant samples that lace “Tokyo” from 2003’s The Lemon of Pink. Coupled with music, these samples conjure up emotional responses and a vivid sense of time and place in a manner similar to similar a film.
The Way Out has several of these vivid moments, but the best is probably “Thirty Incoming.” The song’s title refers to a series of messages from a man left on a woman’s answering machine. “Hello Mary. Called to wish you good evening. And, uh, wish you good rest. And tell you how much I enjoyed your company last evening. And, uh, it really felt good to lie down next to you. I didn’t realize how much I’d missed that feeling.” Several more snippets of messages are played as the track shifts from distorted dial tone samples, to tribal drum breaks and swelling tremolo strings. It’s one of the most beautiful tracks the group has ever made.
The Way Out is another spectacular release from a group that continues to set its own personal bar higher and higher. And even though we may have had to wait a little longer than we’d have liked for new material, it’s hard to argue with the results. You could tell me the follow-up won’t come out for ten years next time around and I wouldn’t be upset or wonder why. I’d just patiently start counting down the days.