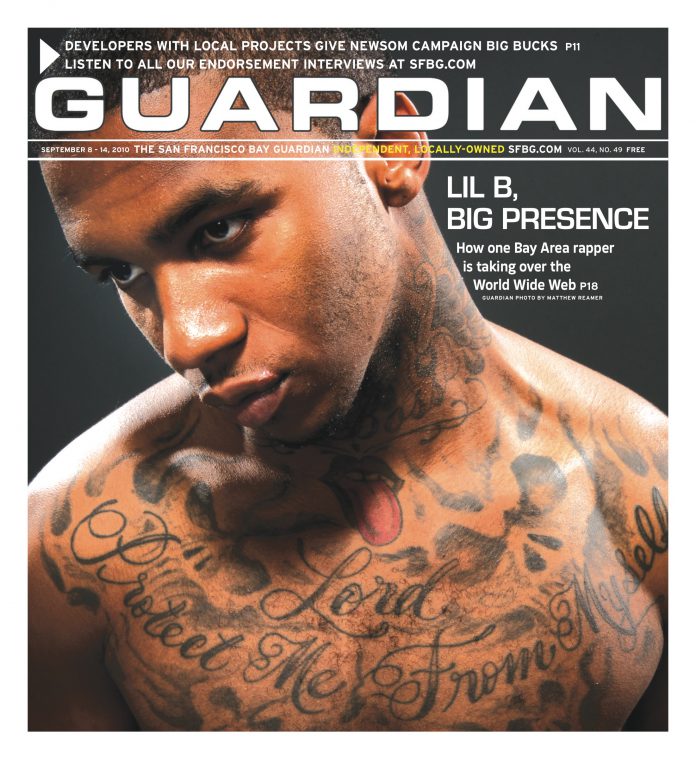 MUSIC When I finally manage to get in touch with Berkeley rap phenom Brandon McCartney, a.k.a. Lil B, he’s just landed in Oakland, having returned from a brief — and in his words, “amazing!” — stay in Atlanta with Internet-rap legend Soulja Boy. He played a show or two down South, and got a lot of love from local radio. “It’s just amazing the respect I’m getting offline,” says, “just from being at a computer, doing what I do.”

What does Lil B do online? He has a prolific Twitter account, more than 100 MySpace accounts, a self-published book on positive living (Takin’ Over, available from Kele Publishing), and dozens of hastily-made videos on YouTube. Most of the top comments on his YouTube account are from B himself, and he leaves comments on blog posts about Lil B with a blogger account, Tropical Doves (tropicaldoves.blogspot.com). At a recent New York City show, Lil B’s status as an Internet star was apparent as soon as he stepped on the stage — dozens of cameras (and one spatula) went up in the air to record or TwitPic the performance, making online footage available to everyone, including anyone unlucky enough to be in the back of the room.

Lil B’s friendship with Soulja Boy makes sense; both are young, motivated rappers who have found ways to harness various social media platforms to generate huge followings online. Their songs and dances are, in essence, Internet memes — dances and credos that get adopted and modified by their listeners, the sort of thing ad agencies throw millions of dollars at in vain attempts to imitate. Together, they make some of the most fun, mindless swag rap out there, ideal for watching on YouTube, on repeat. In “Swag OD,” a recent black-and-white video directed and edited by B during his stay in the South, they ride around suburban Atlanta office parks in Soulja’s black Mercedes. “Ice chain, ice, ice watch, ice neck/ Ice watch, ice, ice, hoes, ice chest (rich!),” B raps at one point. “Swag OD” has this jaded, over-it sound, Soulja sort of yawning between bars. Something’s not right.

Soulja Boy’s blasé attitude is pitch perfect for the aging child star — how else should he feel? But Lil B, who claims to be a Berkeley hippie at heart, seems out of place putting on this act. Even on crushingly low-brow YouTube hits like “Suck My D*&* HO” (his second most watched video, with about 300,000 views), B brings way more energy. This enthusiasm — on stage, on camera, wherever — accounts for a good portion of Lil B’s appeal. You can tell he loves what he’s doing.

The “Suck My D*&* HO” video is a great starting point for those curious about Lil B. “Ten on my dick and my girlfriend Persian,” B lipsyncs from inside an Apple store. “Bitch sucked my dick ’cause I look like a surgeon.” That Lil B gets all sorts of special treatment for looking like people he doesn’t actually resemble — Madonna, Mel Gibson, Matlock, Moses, Jesus, Patrick Ramsey, to name a few — is just something you have to accept if you want to enjoy his music. It’s akin to the suspension of disbelief you bring to a summer blockbuster.

That’s why it surprises me to hear Lil B lamenting all the dishonesty in rap. The problem is structural, he explains. To rap you have to rhyme, and in his words, “It can’t all be true ’cause you’re consciously changing around words and scenarios in your mind to make it add up in the rap.” While rappers may whine about a perceived decline in quality of rap over the years, it’s rare to hear one criticize inherent flaws in the medium; plenty of early-1990s backpack rappers dazzle with their knowledge of Egyptology’s finer points, but this sort of meta-critique is far more impressive. It also pinpoints something people often forget about Lil B: he’s clever, and he cares about and thinks about rap music. It seems like he really wants to overcome this central flaw in hip-hop and doesn’t see any problem with making songs that are nothing but lies in the process. It makes his hoes-on-my-dick-cause-I-look-like-X bit that much more clever — something like a parody of the absurd claims that rap music traffics in.

Though B’s mixtape collaborations with Soulja Boy will likely be fruitful for generating mainstream publicity, and his YouTube dirty raps good for getting pageviews and new followers, what he considers his most honest work, the work he’s most proud of, is his upcoming album Rain in England. The beats, all produced by Lil B, have an ambient, waves-of-sound feel, with occasional keyboard flourishes but no percussion or clear time-signature. It sounds half new age, half spoken word. “The crazy thing is that a lot of people say it’s like spoken word,” B agrees, when I ask him about the similarities. “But really I wrote that as if I was writing a rap.” That Lil B never made beats before Rain in England highlights his enigmatic appeal: it’s often hard to tell whether he’s brilliant, just sort of crazy, or both. “I didn’t know what I was doing,” he explains, “but somehow Rain in England came about.” He speaks of the recording as if it was inevitable — an odd thing to suggest about a new age/spoken word/rap album. Artistic intent aside, B knows his market: the album is being released on Weird Forest, an experimental/electronic label. How’s that for a guy who collaborates with Soulja Boy?

It’s worth noting that Lil B wrote Rain in England at a coffee shop. Also, he talks about it the way you hear people with lots of tattoos explain their tattoos. “I’m gonna look back and [the album’s] gonna remind me of the time period I was in,” he says. The album’s subject matter is about as un-stereotypically “hip-hop” as its process would suggest. On one track, “My Windowsill,” Lil B free-associates about his neighborhood and his future while looking out his window; on another, “All Women,” Lil B rhapsodizes about the beauty and wisdom of the fairer sex. It’s a far cry from the Lil B of YouTube fame: the Lil B who makes songs like “Violate That Bitch,” which would probably make Tipper Gore return to politics, if she ever heard it; the Lil B who, alongside San Francisco’s Messy Marv, claims he is Hannah Montana, on a song that would make your gender studies TA’s head spin. But it’s still Lil B.

That this apparent divide is downright bizarre is not lost on B. “I have a lot of different, you know, feelings and personalities,” he tells me, explaining that this translates into versatility. “I can do ‘Swag OD’ but then my favorite musical artist right now could be Antony and the Johnsons. That’s the difference between me and these other rappers, and other musical artists in general.” This is true to a certain extent: Lil B has a tendency to draw on other genres of music that don’t have a home in mainstream rap — or even rap in general — to infuse his music with pathos.

A relatively recent video for Lil B’s “The Worlds Ending” is a great example of this technique; the first two minutes present B smoking a joint with a gun to his head, listening to “Angeles” by Elliott Smith. Once he starts rapping, it’s B at his darkest and most poignant. He touches on taxes, drugs, death, consumer culture, and tornado watches in Orange County — in his mind, a sign of the apocalypse — with a gun to his head the whole time. Sure, Kanye West, Kid Cudi, and others have been doing something similar for more than a minute, but Lil B’s lo-fi recordings, accompanied by his hastily-made, no-budget videos, result in a scrappier, less calculated, and ultimately more honest feel.

With all this variegated and prolific output, it’s easy to forget where people first heard Lil B: on the lead-in verse of “Vans”, the Pack’s out-of-nowhere 2006 hit. The Berkeley foursome — of which Lil B is still a part — just released their third album, Wolfpack Party, on Aug. 24, while B was in Atlanta. “I’m still in The Pack 100 percent,” he says, when asked about the new release. “You know, congratulations, and I’m happy The Pack album Wolfpack Party is out. It’s been a while since we [put out] some new material.”

It’s hard not to sense B’s detachment when he offers congratulations to a group he’s a part of, and also difficult not to find it noteworthy that the first thing he says about The Pack is that he’s still part of it. He knows what people are thinking, and that he was out of town with Soulja Boy when the album was released. Wolfpack Party is more self-consciously a party record than other work The Pack has done in the past, and it’s a lot of fun to listen to. But Lil B is absent from a significant number of the tracks.

Needless to say, Lil B is a busy young man, even if one leaves out his most notorious facet: the prodigious way he uses his computer and phone to promote his music. He tells me he’s capable of spending 20 consecutive hours online. “There’s always somebody talking to me, hitting me up, uploading a video about me, watching me, you know, giving me comments,” he says. “It’s very addicting.”

Life online is both a blessing and a curse for B, and he’s made a song about that experience too. It’s called “Age of Information.” Toward the end of the track, B claims that the Internet is “destroying the human race,” but in conversation he recognizes that his current trajectory would be impossible without it. “I’m not on TV right now,” he points out. “I don’t have a single on the radio, but people know my songs word-for-word at my shows.”

I recently read in The New York Times that your early 20s are all about figuring out who you are and what you’re going to do with your life, or something like that. It would seem to an outsider that 21-year-old Lil B has a lot to figure out, and that he might be at an artistic crossroads. But that’s not how B sees it. When I ask him which direction he plans on taking his music, he responds, with confidence: “The direction I’m trying to take it in the future is making amazing music.”

Everything that Lil B is working on now, he tells me, will culminate in a forthcoming album with a secret title. “The title is private,” he insists. “I can’t really tell right now.” This from the man who tweets, like, 70 times a day. “I’m just creating and I’m definitely just being truthful and honest, so I’m glad people like me for me,” he says, still waiting at the Oakland airport for a ride back to Berkeley, where he’ll probably head straight to his computer. “That’s the best feeling ever. It’s amazing that I can do me and people are respecting it.”