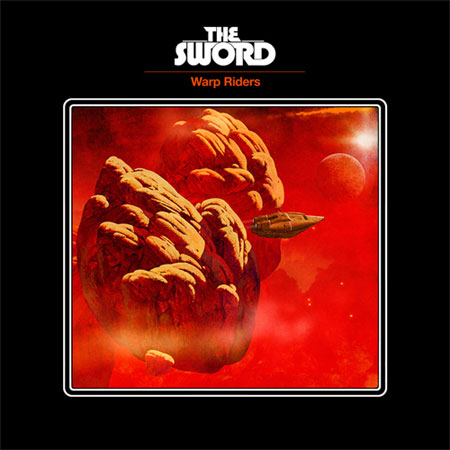 Once a metal album has surpassed a certain threshold of ambition, it is obligated to begin with an instrumental intro track. If said album is a concept album, this is doubly important. Warp Riders, the latest album by Austin, TX quartet the Sword, is a concept album in the most deliciously nerdy sense.

Weaving a dense science fiction tale of a distant plant caught in the throes of “tidal locking” (confining one hemisphere to dark and one to light), its songs regale the listener with visions of archers, mystical orbs, time travel, space travel, time/space travel, and beings called Chronomancers. The instrumental intro, “Acheron/Unleashing the Orb,” is therefore exactly as epic as you would suspect, erupting out shuddering guitar effects into hard-charging downbeat thrash.

The Sword have traveled a long way since their debut Age of Winters landed them on tour with Metallica. Warp Riders’ second track (and first single) “Tres Brujas” bears the trappings of this journey, boasting a chunky, arena-ready riff that prepares to bang heads in the nosebleed seats without sacrificing the band’s distinctive sound.

In the hands of producer Matt Bayles, this sound is rounded, warmed and perfected. Full of crystal clarity and meticulous composition, the album represents a milestone of professional accomplishment, if nothing else. Every note seems to fall in it’s proper place; every fill is carefully constructed and performed. Even the palm-muting sounds mysteriously augmented.

Third track “Arrows in the Dark” is a classic Sword singalong, taking advantage of singer J.D. Cronise’s improved vocal power and enunciation. Cronise is responsible for the album’s impenetrable plotting, so any questions about why arrows play such a big role in a sci-fi story should be directed to him (or possibly James Cameron).

“Chronomancer I: Hubris,” which follows, provides the album’s best riff, an anthemic masterpiece that resolves into vocal-powered verse that inches the story along. “Lawless Lands,” immediately after, is more of a sleeper hit, a stylistic departure that allows the band to settle deep into a hypnotic groove, showcasing bassist Bryan Richie.

After a methodical beginning, the tempo revs up for “Astraea’s Dream,” which is sure to please fans of the band’s more adrenaline-soaked early material. The title track that follows is a barn-burner along the lines of “Freya” (the song that got the Sword their big break), delivering big chunks of exposition along with a massive, concept-encapsulating chorus.

If there’s a song on the album destined to get goats, it’s “Night City,” a mid-tempo Thin Lizzy-style butt rocker with a chorus riff that borders on tongue-in-cheek. But when you consider what the lyrics describe — “You’re in a place they call the Night-side/In the shadows where the killers and the pirates hide/Stick around if you think you can survive” — the choice of a bloozy, verse-chorus-verse number to match a hard-drinking, hard-partying spaceport makes much more sense.

“Chronomancer II: Nemesis” opens with thunderous heaviness and finishes with a guitar solo – Kyle Shutt joins Cronise on a hair-raising tapped harmony as they conclude the enigmatic time-sorceror’s story. The table is then set for “(The Night the Sky Cried) Tears of Fire,” a valedictory epic built around the “Immigrant Song” drum pattern, lovingly adapted by drummer Trivett Wingo. Rife with cataclysmic imagery and infectious choruses, the song burns hot before breaking apart, resolving into the same keening guitar that began the album.

Though it represents the band at its most accessible, but also its most self-indulgent, Warp Riders is nothing if not a smashing success. That a band with such ability has the time, skill, inclination, and funding to craft an impeccable stoner rock album about time travel can be viewed in this day and age as a great boon. The Sword have escaped the gravity of their Sabbath homage roots, and dodged the asteroids of their detractors. Only one question remains: where is this rock ‘n’ roll spaceship headed next?