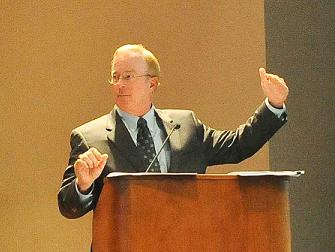 CPUC President Michael Peevey warmly introduced Darbee to the crowd, calling the CEO an upfront thought leader on climate change — a very different message from the same man who harshly criticized PG&E’s spearheading of Proposition 16 before its defeat in June.

“There is something fundamentally wrong with the idea that one company, spending $35 million can, by majority vote of the electorate, seek and obtain a two-thirds vote protection in our State Constitution,” Peevey wrote in an opinion published in the San Jose Mercury News in May. “The purpose of the Constitution is to protect our sacred rights as citizens. It is not to protect the narrow private interests of a particular utility company.”

Darbee’s only comment on Proposition 16 came near the end of his speech, when he attempted to justify PG&E’s spending on failed campaign that some have said should have cost Darbee his job. Referring to the company’s regular opposition to public power campaigns, he said, “$45 million versus $15 million a year – financially it made sense.” But it wasn’t news to anyone that PG&E had an economic interest in essentially killing public power start-ups.

Instead, the CEO chose to focus PG&E efforts in Washington D.C. to nationally address climate change and his company’s support of AB 32, a 2006 law that requires California to reduce its greenhouse gas emissions to 1990 levels by 2020, and PG&E’s opposition to Proposition 23, a November ballot initiative that would freeze AB 32 until California’s unemployment levels drop below 5.5 percent and stay there for at least one year – a rare occurrence in modern economies.

Local environmental activists call PG&E’s purported concern over climate change greenwashing and hypocrisy. “That’s complete crap,” San Francisco Green Party Sustainability Chair Eric Brooks told the Guardian. “For them to claim that they’re a green company is a joke. They do the same thing that tobacco companies used to do; they spread a little money around supporting renewables that aren’t even part of their energy portfolio.”

Brooks said that AB 32’s mandates were flexible enough not to really harm PG&E’s profit margins, so the company can oppose Proposition 23 without impacting its bottom line. Steven Maviglio, spokesman for No on 23 — Stop the Dirty Energy Proposition told the Guardian PG&E had reported no contributions opposing Proposition 23, a far cry from the more than $46 million the company spent championing Proposition 16 in June.

“Thing about Prop. 23 is [that] AB 32 doesn’t really box them in,” Brooks told us. “If we switch to localized, renewable energy, that puts PG&E out of business. Prop 16 would have been much more effective at eliminating green energy in California than anything else like Prop 23.”

Yet the main controversy aired at the CPUC meeting wasn’t about greenwashing or Prop. 16, but smart meters. About a dozen protesters gathered at the steps of the California Public Utilities Commission before Darbee started speaking. The group is concerned about PG&E’s construction of a “smart grid” of wirelessly transmitting electronic meters critics say can cause cancer due to electromagnetic radiation as well as immediate discomfort for those who are electrically sensitive.

Joshua Hart of Scotts Valley Neighbors Against Smart Meters interrupted Darbee near the beginning of his speech. “Mr. Darbee, your smart meter program is a false solution to climate change,” Hart shouted as he presented Darbee with a “dumb meter,” a cardboard box with photos of smart meters pasted to it in which the word “smart” was replaced with the word “dumb,” Hart told the Guardian.

Hart was escorted out by a CHP officer, but he was not arrested or cited. Darbee finished his opening remarks before addressing first concerns about false billing information that had been transmitted by a small percentage of the more than 6 million smart meters already installed in California, then radiation generated by the devices.

Darbee said residents of Bakersfield were confused about rate tiers in July 2009, which had more days with temperatures exceeding 100 degrees than the year before, but he insisted the meters were not to blame for high energy bills.

However, PG&E has acknowledged that some of its new smart meters malfunctioned and were broadcasting energy usage reports that resulted in higher bills for consumers. But the company insists that less than 1 percent of installed smart meters have malfunctioned.

San Francisco City Attorney Dennis Herrera petitioned the CPUC in June to immediately halt installation of smart meters until state regulators conclude an investigation into whether the meters are accurate. The CPUC has not stopped PG&E from installing the devices.

“This is Peevey’s legacy,” Hart told the Guardian referring to CPUC President Michael Peevey, “a ‘smart grid’ in California.”

Darbee next addressed the electromagnetic radiation generated by the smart meters’ wireless transmissions by describing a comparison PG&E did between the new meters and cell phones.

But Hart rejected PG&E’s study and said he didn’t believe the Federal Communication Commission’s limits on electromagnetic radiation were actually safe. “The FCC regulations on EMF [electromagnetic field] safety were written by the telecommunications industry,” Hart told the Guardian. “If the smart meters were being installed in Russia, they would be illegal.”

Sebastopol resident Janhavi Hubert attended the protest and speech as a representative of people who are “electronically sensitive.” “When they put a smart meter on my neighbor’s house 25 feet away, I didn’t expect to feel anything,” Hubert told the Guardian. “I had heart palpitations, which I’ve never had before, heart arrhythmia, and headaches, and when I go away from the house, it goes away.”