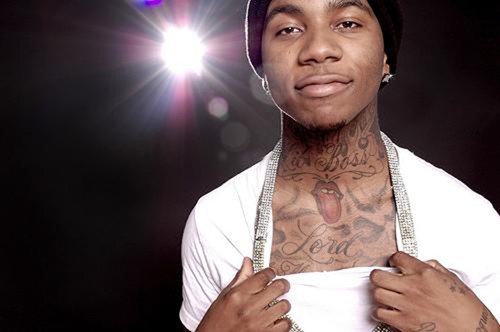 Meeting people you know only from the Internet is a bizarre experience. I share my tedious thoughts with people on Twitter all day, and I read theirs, and yet I don’t know the first thing about them as a person, and they know nothing about me. There are precious few opportunities to actually meet these people, and I like it that way. Lil B the Based God‘s sold-out late July show at Santos Party House in Lower Manhattan would not be one of those nights. Lil B without the Internet is inconceivable. In some ways, he is Internet hip-hop culture personified, embodying both its great potential, and its childish shortcomings. A lot of Internet people would be in attendance, I learned, from both my Tumblr and Twitter feeds.

Wesleyan-grad duo Das Racist opened the show by giving the audience a taste of how this Internet-meets-real-life show might play out. Before they started performing, Hima paused to tweet about the fact that they were performing, while explaining to the audience exactly what he was doing. He stopped mid-performance to do this again. While more obnoxious than funny — though not as obnoxious as the “30-second vibe-out” that almost got them booed off stage — it was in line with the theme of the night: what happens when you put the Internet into a room?

Initially, it seemed this might make for an awkward meeting. Das Racist’s highbrow-meets-lowbrow shtick is great to listen to on the subway, and perfect for Internet popularity, but referencing Camus and Cam’ron in the same line just doesn’t play well onstage, especially when it turned out that despite the duo’s home field advantage, virtually everyone was there to see Lil B.

Shortly after Das Racist’s set closed, The Based God walked through the crowd and onto the stage amid chants of his ad-libs “Swag!” and “Woo!” He hardly needed to warm up the New York crowd, but he did. B opened by rapping a verse over Rick Ross’ “Blowin’ Money Fast” instrumental, which you might think is the only song on the radio in New York. He worked the crowd, taking breaks to thank everyone for coming out, talk about how much he loves New York, and how much he really doesn’t “give a fuck.”

But it was clear from his performance that he does give a fuck; like anyone who spends too much time online, he’s just a bit scatterbrained. He had the crowd in a frenzy for his YouTube hit “Like a Martian” — everyone knew all the words. But he cut it off before hitting the best part of the hook — the part where he says “Martian” over and over again – in order to have another chat with the audience.

The crowd didn’t seem to mind these long asides. After all, Lil B’s appeal isn’t just in his music, it’s his whole online persona. He has a prolific Twitter account, more than 100 MySpace accounts, a self-published book on positive living, and dozens of hastily-made music videos on YouTube. Most of the top comments on his YouTube videos are from B himself, and he leaves comments on blog posts about himself with a Blogger account, Tropical Doves. Some of the best and funniest moments of the show, like when B said he feels like Mel Gibson (a claim which has now become a song), took place during these interludes.

And like Das Racist before him, Lil B’s status as an internet star was apparent as soon as he stepped on the stage — dozens of cameras (and one spatula) went up in the air to record or TwitPic the performance, obscuring the view of the Based God for anyone unfortunate enough to be towards the back of the room, but making footage of the performance available to anyone foolish enough to miss it. At one point, B stopped rapping, and started asking for people in the audience by their Twitter handle. He batted .500 — one of the two he asked for hadn’t shown up. The one who had was ecstatic. At another point, DJ Wookie was taking so long to start playing the track B had requested, my friend joked that Wookie was making sure the YouTube clip had loaded completely.

And his interaction with his audience stayed as constant and bizarre in real life as it is online, even during his performance. “What should I do in New York?,” he asked the crowd halfway through his set. Once he got an onslaught of suggestions, he admitted that he couldn’t make them out. There is, after all, a difference between checking your “@ replies” and trying to understand a screaming audience.

Still, watching the Based God interact with his fan base in the flesh instead of cyberspace was anything but awkward. His charisma, and his fan’s enthusiasm for his music, and excitement — I think — to find that there are plenty others like them made the feeling at the show both communal and electric. These are hundreds of thousands of downloads, comments, and YouTube hits embodied; it was the collective discovery that, no, you are not the only person who watches “Suck My Dick Ho” on YouTube every other day, even though you feel like you are (a side note: the crowd probably knew the words to “Suck My Dick Ho” better than Lil B did).

The only person not having a blast was the stoic security guard on stage, who B used like a mic stand at times. He was noticeably less happy when B invited a few “cooks” onstage to perform his patented, viral “cooking” dance. B trusted the audience a bit too much; predictably, the stage got rushed. But he finished out strong, performing “Birth of Rap” and “I’m God” – two of his higher-minded, less-oral-sex-driven songs – in a crush of Twitter followers and YouTube friends.

After the show ended, as people were milling about, some dude came up to me and asked if my name was Willy. He introduced himself using both his Twitter name and his real name; we’re friends on there, and both read each other’s blogs. Corny, sure. But lame as it sounds, he and his friends joined me and my real-life friends for beers at a seedy, smelly karaoke bar down the street from Central Booking in Chinatown. We shot the shit about rap and the concert over some overpriced bottles of Bud, and generally had a good time. It wasn’t weird at all.