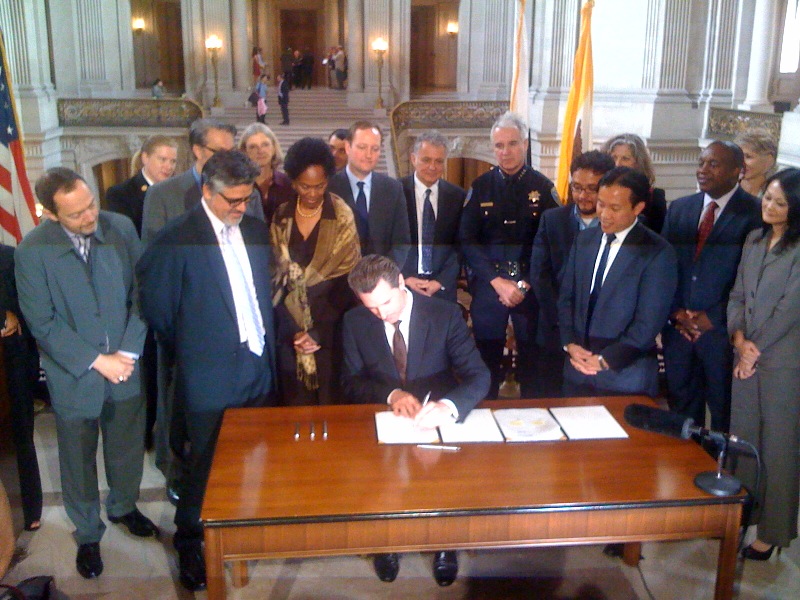 Hypocrisy hung thickly in the air at City Hall today as Mayor Gavin Newsom refused to responsively address glaring contradictions on a pair of high-profile policy stances, pursuing naked self interest while cloaking himself in deceptive but high-minded rhetoric. Newsom used the city budget-signing ceremony to effusively praise the labor unions that he publicly shamed into giving back $250 million over two years to balance the budget without tax increases, a budget that cut services and increased various fees and fines.

“Labor has been under attack in this state and country. They’ve become a convenient excuse for our lack of leadership in Sacramento and around the country,” Newsom said without blushing, defending unions against pension reform measures such as Public Defender Jeff Adachi’s SF Smart Reform, which he opposes while continuing to support the need for pension reform.

But Newsom seemed unaware that the layoffs, forced furloughs, and voluntary pay cuts accepted by the unions that he publicly demonized just a couple months ago and now praises – whose support he needs for his current run for lieutenant governor – is connected to his steadfast opposition to new taxes, which he reiterated today: “We balanced the budget without raising taxes. I don’t believe in raising taxes, we don’t need to raise taxes.”

Despite the fact that just 10 percent of San Francisco businesses pay any business taxes to the city, Newsom opposed and this week helped kill a measure by Board President David Chiu to reform the business tax system in a way that would increase taxes on large corporations, lower them on small businesses, create private sector jobs, bring $25 million per year into the city, and expand the tax burden to 25 percent of businesses, including the large banks, insurance companies, and financial institutions that are now exempt. Instead, labor took a deep hit and the city still faces projected $500 million budget deficits each of the next two fiscal years.

But Newsom’s hypocrisy isn’t confined fiscal issues. After the ceremony, he told reporters that he was sticking by his November ballot measure to ban local elected officials from serving on the Democratic County Central Committee, even after last night insisting that body give him a seat, which they had to change the bylaws to accommodate.

At last night’s DCCC meeting, members of an elected committee that includes four progressive supervisors and three current supervisorial candidates called for Newsom or his proxy John Shanley to explain why he is pushing a policy to ban locally elected officials from serving on the DCCC, a body in which elected state and federal officials automatically get seats.

“This mayor is on record as saying local officials should not serve on the committee,” Sup. David Campos said at the meeting, calling for Newsom to clarify this policy contradiction and offer his reasoning for the policy: “We don’t want to do anything that is inconsistent with what the mayor has said so far.”

Chair Aaron Peskin translated Campos’s comments as indicating “some level of irony or hypocrisy,” but Campos objected, insisting “it’s not a personal attack” but a genuine desire to know why Newsom sought to ban local elected officials after progressives won a majority of the DCCC seats in June.

Both Shanley last night and Newsom today gave the same legalistic answers, noting that he’s not serving in his capacity as the mayor, but as an ex officio member who automatically gets a seat for being the Democratic nominee for a statewide office (although the DCCC legal counsel said Newsom wasn’t entitled to a seat because the bylaws only award a seat when the current holder of the office being sought is a Democrat).

But DCCC member Carole Migden objected to Shanley’s answer, saying of Newsom’s effort to unseat duly elected members, “That’s picking a fight, if we want to be clear…That effects my vote, I have to say. It’s disrespectful and unconstitutional.”

DCCC member David Chiu noted that Newsom’s ballot measure would explicitly ban supervisors and the mayor from serving on the DCCC and said that the mayor still had a few days before the deadline for him to withdraw the measure, which he single-handedly placed on the ballot using his authority as mayor.

But today, when asked by the Guardian, Newsom said he had no intention of either withdrawing the measure or explaining it to the DCCC. When we asked about the contradiction in his positions, Newsom said only, “If the voters support it then it would be the right thing to do.”

He was similarly dismissive when other reporters continued to ask about the controversy, gesturing toward me with a dismissive wave of his hand as he said, “Certain people with certain newspapers major in the minor.”

After being told that Newsom is sticking by his DCCC ballot measure, Chiu told us, “I hope the mayor can move beyond the politics of personality and build a party vehicle that is about unity.”