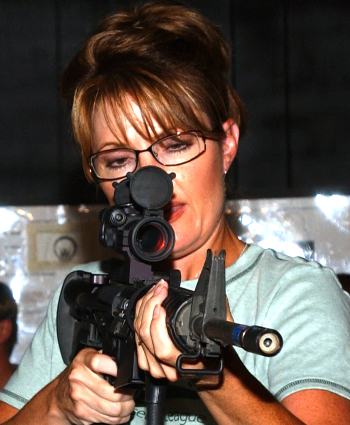 American political discourse is being poisoned by some truly scary rhetoric from the right-wing, which is increasingly resorting to threats and condoning of violence, a trend that has played out in recent weeks right here on the Guardian’s Politics blog. Now is the time to recognize and stop it, just as a new coalition is calling for.

San Francisco resident Greg Lee Giusti was arraigned in federal court this morning for making threatening phone calls to House Speaker Nancy Pelosi, one day after the arrest of Charles Alan Wilson for threatening to kill Sen. Patty Murray (D-Wash.). In both cases, the subject was the recent health care reform bill, the anger of the suspects stoked by misinformation and inflammatory rhetoric from top conservative politicians and media figures, as well as the Tea Party movement.

But these cases – along with the recent domestic terrorism plot by Christian fundamentalists and other incidents of overt and implied threats of violence – aren’t isolated examples; they are closer to the norm of rhetoric emanating from the right-wing these days, a trend not seen in this country since the months that led up to the bombing of the Oklahoma City federal building by right-wing radical Timothy McVeigh, the biggest act of domestic terrorism before 9/11.

Consider Giusti, who also wrote a scary letter to me and the Guardian in the midst of his threats against Pelosi, taking issue with our recent cover story that was critical of police crackdowns on SF nightlife. In additional to praising police violence and encouraging cops to “crack a few skulls open,” just like his NYPD cop uncle, who “knows how to inflect [sic] excruciating Paine [sic] on someone without leaving any signs of what happened.”

But Giusti was far from alone in promoting violence over the issues we’ve raised. SFPD Southern Station Capt. Daniel McDonough praised the sometimes-violent tactics of the two undercover cops who bust parties and nightclubs, strongly implying those tactics were justified to counter the unspecified threats of violence that nightclubs represent. “Because of their diligence and professionalism the amount of violence and disorder has been reduced,” McDonough wrote, echoing a troubling strain of right-wing political thought that condones violence to prevent even speculative threats of violence, a perspective that led us to invade Iraq.

And when I wrote about McDonough’s response yesterday, a commenter wrote that aggressive police tactics are justified because, “The unprecedented ascendancy of nightclubs and violation of the Constitutional rights of residents to peaceful use of their property calls for drastic measures.”

In a similar vein, our blog post this week on a newly released video of American soldiers in a helicopter opening fire on a crowd in Baghdad that included journalists and children while making disturbing comments that seemed to relish the opportunity to kill people also provoked some equally disturbing comments.

“So a couple of journalists embedded with terrorists killing Americans got wiped out…congrats to the shooters! A couple of terrorists in training got shot up in a terrorist rescue attempt…congrats to the shooters! Everyone on scene who died got what was coming to them,” one wrote, while another warned, “Raise a weapon against America or Americans and prepare to experience the worst day in the rest of your life. Hoowa!”

Even though the helicopter was miles away and the video showed no credible threats toward it or anyone else, supporters of the war seemed to think that quickly resorting to violence is acceptable. “This is the price we pay for are [sic] freedom. put yourself in that chopper and then put yourself on the ground they all no [sic] what can and will happen. It will happen at home again 911 just give it time. We will do are [sic] best to defend are [sic] country. GOD BLESS USA.”

And I will do my best to defend this country from right-wing extremists. That effort starts with challenging Sarah Palin’s winking exhortation for her followers to “lock and load,” and with letting commentators like Glenn Beck and Bill O’Reilly, on a nightly basis, cast liberals as enemies of the state to their well-armed listeners.

This is simply not OK, a point that’s being made by the prosecutors of Giusti and Wilson, as well as the new Stop Domestic Terrorism campaign by a coalition of organization concerns about the increasing violent rhetoric of the rights.

“Law abiding Americans do not advocate violence against fellow Americans,” campaign spokesperson Brad Friedman said in a public statement. “As Americans, we all need to engage in a vigorous debate of the issues based on facts and reason rather than fear and prejudice.”

But even in San Francisco, it’s common for conservatives and so-called “moderates” to condone violence against the homeless, drug users, petty criminals, ravers, Critical Mass bicyclists, “illegal immigrants,” or others that they dismiss as “getting what’s coming to them” for daring to violate laws or social mores. I’ve personally had violence wished on me more times than I can count, in letters, phone messages, and to my face.

As a full-time newspaper journalist for almost 20 years, I’ve dealt with right-wing crazies for a long time, but there are times when you can sense their indignation getting ratcheted up to dangerous levels. In 1994, I wrote stories for the Auburn Journal and Sacramento News & Review about right-wing “patriots” and “constitutionalists” that were part of the militia movement in Placer County.

They warned me that then-President Bill Clinton was an agent of the “New World Order” who was plotting a socialist takeover of the “real Americans,” and that violent resistance was necessary. They spun elaborate fantasies about the impending civil war, which they said the federal government had already started with their raids in Ruby Ridge and Waco.

“You won’t be able to write an article like this anymore because the government will come and kick in your door and murder you and your children,” one militia member told me after my first article came out.

On April 19 of the next year, while I was working for the Santa Maria Times, I remember vividly when the federal building in Oklahoma City was bombed, killing 168 people. For the first 24 hours, most media outlets speculated that it was an attack by terrorists from the Middle East, but as soon as I heard it was the anniversary of the Waco incident, I knew exactly who was really responsible: the dangerous right wing extremism that pushed militia member Timothy McVeigh to attack his own country.

And now, it’s happening again. Overheated rhetoric on the right is casting Pelosi and fellow Democrats not just as political opponents, but as dangerous enemies of the “real Americans” that Palin claims to champion. They have, like Wilson said of Murray, “ a target on her back.”

When Sen. Leland Yee tried to find out how much Palin was being paid to speak at California State University-Stanislaus, he was aggressively attacked by her acolytes for trying to “take away her constitutional right to free speech,” according to an anonymous message left on his answering message yesterday, which his office shared with the Guardian. “Maybe we ought to have a homosexual with a long enough dick so he can stick it up his ass and fuck himself while he’s on stage giving a speech.”

Such crass, semi-literate, weirdly homophobic comments might be funny if they weren’t part of a larger, more dangerous trend in this country. Once again, a Democratic president is being actively accused of treasonous hostility to “real Americans” by major conservative figures with huge audiences, and once again, the lunatic fringe is being worked up into a frenzy.

The recently uncovered plot by Michigan militia members to murder police officers in the hopes of starting a holy war with the enemies of Christianity is just one indication for what this kind of rhetoric is leading to in isolated pockets around the country. Now is the time to put a stop to condoning violence in any of its forms, whether it’s cops cracking the skulls of clubbers or street denizens, soldiers firing on crowds of people, or citizens threatening our elected representatives.

“Force is the weapon of the weak,” said the radical pacifist-anarchist Ammon Hennacy, a quote that was often repeated by folk singer and progressive writer Utah Phillips, who I had the honor of covering at the same time I was covering the militia movement. It’s true, and at this difficult moment in our country’s history, let’s all try to stay strong.