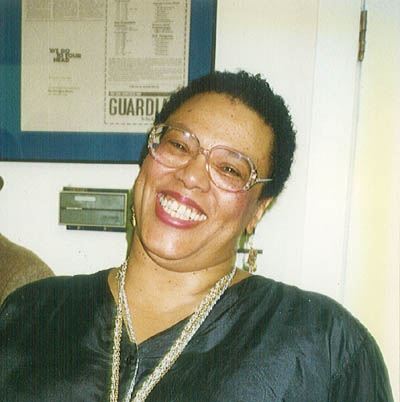 I was saddened to hear that my former associate of many years, Tricia Taborn, died today (April 7) of cancer at Kaiser Hospital in Oakland.

She was four days shy of her 62nd birthday.

She entered the hospital on Saturday (April 3).  Her mother Neomi flew out from Dallas,  Texas,  to be with her the last few days. Her sister Ginny, her  two brothers Kenneth and Michael  and her husband Gerald Baron  were with her when she died.

Tricia worked for me as assistant to the publisher from July of 1993 to April of 2000.

I always marveled  at how she  could jump into things and make them work.  Her friends and family say that she has been doing that throughout her life.  When she came to the Guardian, she had no newspaper or journalism experience, yet she quickly  fit in and

became a valuable employee able to handle most any administrative job that came along.  She kept me organized and she organized an endless series of events at the Guardian that included five annual awards contests and ceremonies (poetry, photography, cartoons, short stories, film treatments) that she structured to reflect the rich cultural diversity and artistic talent in San Francisco.

She also put on major events and dinners for the Northern California chapter of the Society of Professional Journalists and the California Freedom of Information Coalition during its early days.  She loved being a hostess and she did so with flair, a rollicking laugh, flamboyant hats and an ability to make the event important and distinctive and  to see that everyone was welcome and having fun. She served for several years as a director and treasurer of SPJ.

Victoria McDonnell, a friend that Tricia talked with almost every day on the phone, agreed that Tricia liked to jump into things.

“I know she joined her high school year book committee in Florida soon after arriving at the school.  In San Francisco, she did this at Major Ponds (a jazz club where she worked as a bartender in the late 1970s and early 1980s), the Bay Guardian, the Industry Standard (the late dot.com magazine),  OneWorld Health, and lastly selling real estate.

Victoria Hale said that Tricia was “an amazing woman  who accomplished much, despite the obstacles, with humor and passion, while caring for others.  She had an especially good relationship with the Indian physicians who worked on leishmaniasis.  She demonstrated much courage and trust by becoming the first employee of OneWorld Health, while still on the first floor of our house.”

Tricia lived in Florida, Utah, Atlanta, Dallas, and other places because her father Raymond Taborn was an aeronautical engineer and moved about because of his work. She bought a house in Berkeley in 2004 with her husband Gerald Baron.

For the last two years of her life, Tricia lived her dream: getting her independence by selling real estate and having fun doing it. She worked in the Berkeley office of Coldwell Banker, specializing in low price housing that many real estate people avoided. She was recently recognized as the top sales person in her office.  Her main hobby, according to her friends, was shopping and she was well known at Nordstroms, Macys and Ross department stores, as well as thrift shops and farmer’s markets.

Tricia was diagnosed in November with metastatic colon cancer. Over the last two months she rallied and was able to spend time and phone calls talking to her friends and “wrapping up her relationships in a positive and meaningful way,” as Victoria Hale put it.

Invariably, her friends reported that Tricia remained upbeat until she went into the hospital for the last time.

She leaves her mother Neomi Taborn of Dallas, a sister Ginny of Dallas, two brothers, Kenneth of Arlington, Texas, and Michael of Phoenix, Arizona, her husband Gerald Baron,  and Tommy, her beloved cat.  Services are pending and will be reported on this blog when they are set.