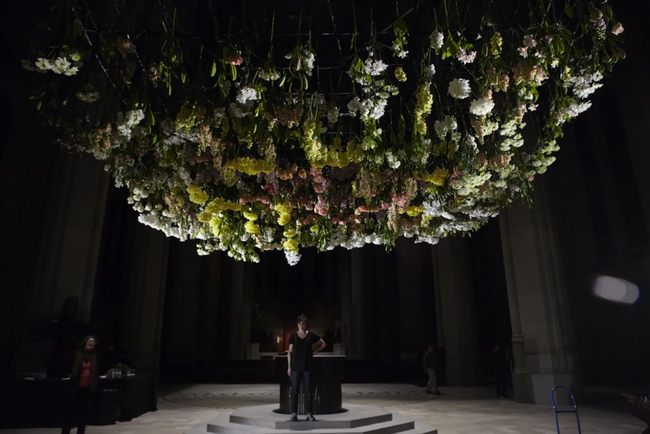 It was bound to happen. Some girl in a white coat tagged Grace Cathedral.

One thousand flowers were suspended from above as an art installation while I watched Nodzzz run through a collection of songs. The band described the outing as the first time they had ever held a microphone in church. I took that as confirmation they weren’t pastors or priests in their previous line of work. As soon as their set was done someone, maybe the event’s organizer, got on the microphone and had a startling announcement to make. He informed us that this may have been the final installment of EpiscoDisco because the woman in white, who he accused of “probably tripping on acid,” had vandalized the church. The man on the mic rhetorically told us that in the event’s one-year history, no such disrespect had ever occurred up until now, and that the future of the monthly get-together was now in doubt, as the church’s leadership would likely frown upon that night’s incident. He described what she had done and what she was wearing. To be honest, I sort of feared for the girl, because it sounded as if this guy was hoping for a lynch mob or at least some sort of immediate repercussions for her actions. He seemed pretty pissed, and if he was to be held responsible, I’d say rightfully so.

The church is one of those buildings a San Francisco resident is likely to take for granted. Grace’s occupation would normally be limited to parishioners or tourists, but its gothic majesty opens engraved chamber-like doors once a month on Saturday evenings, allowing a curious bunch of unlikely visitors to roam freely, seemingly unsupervised. Maybe it’s my Catholic upbringing, but something about the whole thing just seems so backwards. Disco scenesters mix it up with the garage rock crowd with drinks in their hands and stained glass windows in the background? Same-sex couples sharing intimate secrets littered among long rows of pews? Hipsters dressed (in their Sunday best?) ogling a giant crimson version of the holy bible all within the Episcopalian version of the house of the lord? It was madness. It seemed so wrong. Really, what would Jesus do?

Who could blame the girl? Before the culprit’s act was publicly announced, I myself was tempted to do something drastic in iconoclastic fashion. In fact, I did voice my fantasy out loud to my friend, saying I wanted to tag or at least tip something over. I’m sure some of those feelings were just residual teenage angst from the aforementioned upbringing of religion’s expectations of conformity and control. However, whereas I was a talker, the woman in white was a walker. Without inhibition she let loose in the form of either spray paint or maybe one of those Magnum markers. One friend thought she smelled something funny, but figured someone had light up a cig indoors. I never saw (nor smelled) her work of attempted ecclesiastical immortalization, but her sacrilegious act made her instantly notorious and got her bounced. We could only wonder what compelled her to do it. What did she have to say? My guess was “666,” even if it is a bit cliché, while another friend suggested she graffiti-ed “This church rulz.” In any event and quite unceremoniously, she attempted to re-enter the place of worship, but to no avail.

People filtered out of the cathedral slowly, just as they had been asked, while flamboyantl men with interesting haircuts decked out in leopard-print ensembles continued to berate the alleged vandal on their way out. As far as they were concerned, their EpiscoDisco was to suffer an uncertain future. So much for the church’s youth outreach program, but it was nice while it lasted. I guess we’ll just have to stay tuned.